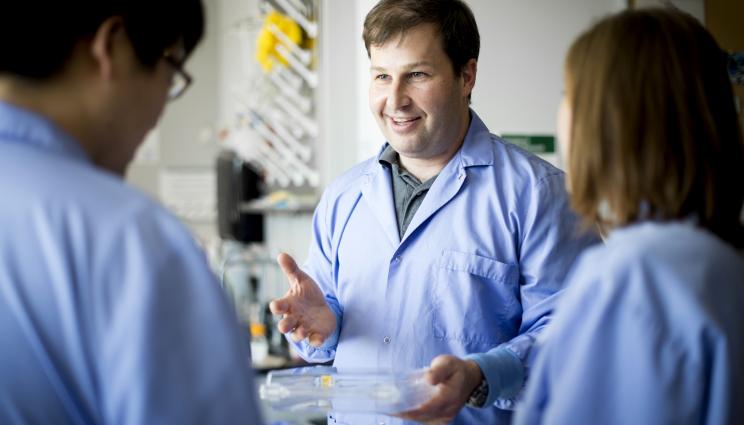 DARPA’s 60th Anniversary Symposium included a SUBNETS exhibit demonstrating Lawrence Livermore’s implantable arrays as part of a display of the “closed-loop” approach of responsive brain stimulation. The display is installed in LLNL’s Center for Micro and Nanotech building. Photo courtesy of Matthew Dombro/DARPA

The symposium, held to celebrate DARPA’s innovative approach to creating breakthrough technologies and capabilities, attracted numerous attendees from government, academia and industry. DARPA’s Biological Technologies Office (BTO) included the SUBNETS exhibit demonstrating LLNL’s implantable arrays as part of a display of the "closed-loop" approach of responsive stimulation for precisely tailored therapy to produce specific neural and behavioral responses, which is central to the SUBNETS program.

SUBNETS, which began in 2014, aims to develop novel neural interface technologies for the treatment of neuropsychiatric conditions such as anxiety, depression, post-traumatic stress disorder (PTSD) and chronic pain. LLNL, in collaboration with researchers at University of California, San Francisco (UCSF),  has successfully utilized the arrays to monitor, record and stimulate brain regions in patient volunteers who are undergoing neurosurgical procedures as part of their clinical treatments for epilepsy or other neurological conditions. Earlier this year, DARPA provided additional support to the LLNL and UCSF team to further advance the prototype hardware developed in the SUBNETS program toward its potential use in clinical trials.

"Men and women all across our great country make extraordinary sacrifices to defend our homeland, and often they not only bear the scars on the outside, but they bear the scars of their sacrifices on the inside," said Justin Sanchez, the director of DARPA’s Biological Technologies Office and program manager for SUBNETS, during remarks at the D60 Symposium.

Sanchez added that more than 2.2 million military veterans are living with some form of psychiatric illness, and for many, medications and psychiatric therapy are ineffective.

"We need something better," Sanchez explained. "What this truly means is that they don’t have to live with debilitating depression or extreme anxiety or PTSD. Now we have some new choices. We’re going to try to make these technologies go from a proof-of-concept to commercial products that can ultimately impact their lives."

The SUBNETS device operates in a closed-loop manner to deliver precise, responsive stimulation only when needed, as opposed to an open-loop system where neural stimulation is always on, even when the patient doesn’t need it, and can become ineffective over time. This approach will likely reduce side effects and allow for the therapeutic stimulation to be tailored to each patient’s own brain activity patterns, according to LLNL bioengineer and research engineer Razi Haque.

"I think the SUBNETS exhibit featuring LLNL technology showcased DARPA’s support of our work on the SUBNETS program, as well as the potential impact of the progress we have made toward creating a new therapeutic option for mood disorders," said Haque, who attended DARPA’s 60th Anniversary Symposium to assist in presenting the SUBNETS program to exhibit hall visitors. "It gave us an opportunity to discuss the technology with people who might not normally be exposed to cutting-edge neurotechnology and how it may be used in conjunction with advanced understanding of the neuroscience underlying brain networks to more effectively treat neuropsychiatric conditions."

"LLNL’s experience and expertise with neural implant technologies, as well as facilities such as the dedicated Biomedical Foundry, enables the Lab to make a unique and significant contribution to this area," added LLNL’s Associate Director for Engineering Anantha Krishnan. "Together with our partners at UCSF, we look forward to achieving DARPA’s goals in the SUBNETS program."

Edward Chang, a neurosurgeon at UCSF and the principal investigator for the UCSF/LLNL SUBNETS team, has used the LLNL multielectrode arrays to temporarily record neural signals in a handful of patients to date. In a study recently published by Nature Biotechnology, researchers at UCSF and the University of Southern California recorded and analyzed neural activity in seven volunteer epilepsy patients who were already undergoing monitoring for their seizures at UCSF while the patients reported their moods on a questionnaire over several days. The researchers then used that data to develop a decoding tool that could recognize patterns in brain activity associated with a patient’s mood and predict variations in mood using only the brain’s signals.

"We are so excited to have translated the LLNL electrode technology to use in humans," Chang said. "The quality and resolution are unprecedented for clinical neurological devices."