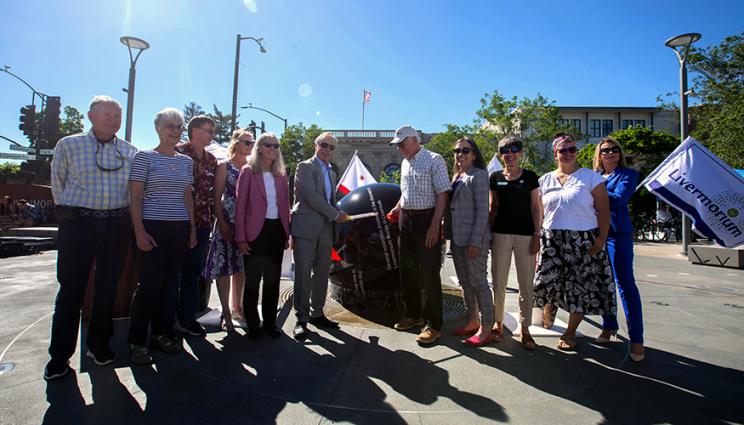 During a ceremony on June 15, Livermorium Plaza was officially dedicated by representatives from the City of Livermore, National Nuclear Security Administration, Lawrence Livermore National Laboratory and community leaders.

The plaza, located at 116 S. Livermore Ave., pays perpetual tribute to the Lab’s work on element 116, livermorium. It features a park with a five-foot, 18,000-lb. floating granite sphere fountain, representing the nucleus of a Livermorium atom. The seven orbitals are populated with 116 electrons — 20 of those electrons, representing the element calcium, will be illuminated. For Livermorium to be created, calcium atoms are accelerated to one-tenth the speed of light and then directed into a curium target. And for 61 milliseconds, they form one of the rarest elements in the universe.

Livermore Mayor Bob Woerner, ceremony emcee, recognized the many contributors to the plaza and its impact on the community, saying it “improves the quality of life in Livermore.”

Department of Energy Under Secretary for Nuclear Science and Administrator for the National Nuclear Security Administration Jill Hruby, who spent decades in Livermore and raised her children in the community, noted the plaza shows the commitment the agency and the national labs, Livermore and Sandia, have to partner with the community and bring science to the masses.

The community connection was echoed by LLNL Director Kim Budil. “This is my town, so this is very heartwarming to me,” Budil said. “This brings science to the heart of our city. Residents can come here and be inspired.”

The plaza sits on the original location of the Livermore Hotel from the 1880s, which then converted to a gas station and then to a park in 1974. The location’s newest iteration as Livermorium Plaza was a 10-year project originally proposed by former mayor, John Marchand.

“This is so cool I can hardly stand it,” Marchand said. “This is a centerpiece for our community and looks to expand human exploration.”

The park also includes placards and stones to provide more details on the science depicted in the plaza. LLNL scientists have been involved in heavy-element research since the Laboratory's founding in 1952 and have been collaborators in the discovery of six elements on the periodic table. Element 116, livermorium, is named after the city and the dedicated team that discovered this new element.