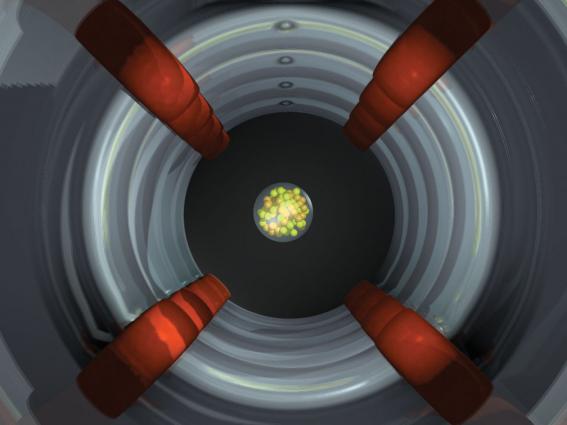 Livermore Scientists Team With Russia To Discover Elements 113 and 115

LIVERMORE, Calif. — Scientists from the Glenn T. Seaborg Institute and the Chemical Biology and Nuclear Science Division at the Lawrence Livermore National Laboratory, in collaboration with researchers from the Joint Institute for Nuclear Research in Russia (JINR), have discovered the two newest super heavy elements, element 113 and element 115.

In experiments conducted at the JINR U400 cyclotron with the Dubna gas-filled separator between July 14 and Aug. 10, 2003, the team of scientists observed atomic decay patterns, or chains, that confirm the existence of element 115 and element 113. In these decay chains, element 113 is produced via the alpha decay of element 115.

The results have been accepted for publication in the Feb. 1, 2004 issue of Physical Review C.

"These elemental discoveries underscore both the value of federally-supported basic research and the benefit of unfettered international scientific collaboration," Secretary of Energy Spencer Abraham said.

The experiments produced four atoms each of element 115 and element 113 through the fusion reaction of calcium-48 nuclei impinging on an amercium-243 target.

The team observed three similar decay chains consisting of five consecutive alpha decays that combined took less than 30 seconds and terminated in a spontaneous fission of an element 105 (dubnium) isotope with a very long half-life (16 hours), making the discovery of particular interest to chemists. An interesting fourth decay chain also was observed that consisted of decays that were unlike the previous three chains.

Joshua Patin, Livermore’s primary data analyst on the team, said the three similar decay patterns were a "positive identifier that something good had been seen because the long decay chains just don’t happen that often."

"This just opens up the horizon on the periodic table," said Ken Moody, Livermore’s team leader. "It allows us to expand the fundamental principles of chemistry. From new chemistry comes new materials and new technology."

Scientists at Livermore and JINR independently verified the data.

An efficient accelerator is needed to obtain an intense calcium-48 beam. The results have only been achieved to date on the JINR’s U400 cyclotron. Associates at JINR’s ion-source group produced the intense calcium beams while Livermore supplied the americium target material.

"Twenty years ago, no one would have ever thought that this was possible because the technology to produce such an element just wasn’t there," Patin said. "But with the efficiency of the Russian cyclotron and the ability to run the experiments for long periods of time, we were able to achieve this tremendous accomplishment."

Livermore has had a long-standing heavy element group since the inception of the Laboratory in 1952. The group has been successful in the discovery of several new elements over the years because it has access to very unique materials to perform the experiments. In 1998 and 1999, the Laboratory announced the discovery of elements 114 and 116, respectively.

"This is quite a breakthrough for science," said Chemistry and Materials Science Associate Director Tomas Diaz de la Rubia. "We’ve discovered two new elements that provide insight into the makeup of the universe.

"For our scientists to find two more pieces of the puzzle is a testament to the strength and value of the science and technology at this Laboratory."

The work is supported by the Russian Ministry of Atomic Energy and the U.S. Department of Energy as part of the Russian Federation/U.S. Joint Coordinating Committee for Research on Fundamental Properties of Matter.


For images and animation, go to http://www.llnl.gov/pao/photo_gallery/elements.html