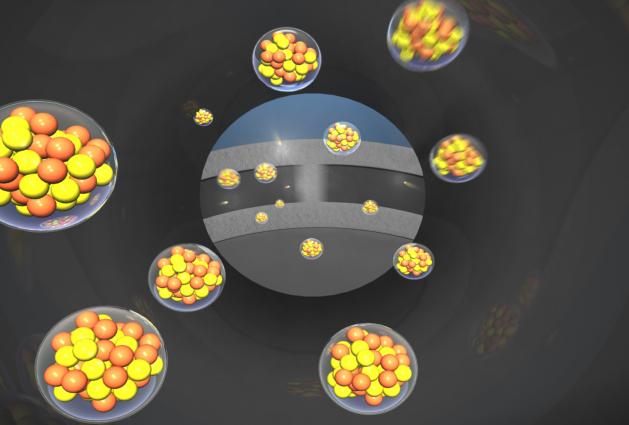 (Above) Artist’s conception of calcium ions traveling down the accelerator at a high velocity toward the rotating californium target. (Below) The new element 118 travels through the accelerator to the detector. (Bottom) The particle begins to decay and eventually fissions. Click on the images to download high-resolution versions.

to view a 27-second animation.

A three-dimensional representation of the theoretical “Island of Stability.”

LIVERMORE, Calif. — Scientists from the Chemistry, Materials and Life Sciences Directorate at Lawrence Livermore National Laboratory, in collaboration with researchers from Dubna, the Joint Institute for Nuclear Research (JINR) in Russia , have discovered the newest superheavy element, element 118.

In experiments conducted at the JINR U400 cyclotron between February and June 2005, the researchers observed atomic decay patterns, or chains, that establish the existence of element 118. In these decay chains, previously observed element 116 is produced via the alpha decay of element 118.

The results are published in the October 2006 edition of the journal Physical Review C .

“The decay properties of all the isotopes that we have made so far paint the picture of a large, sort of flat ‘Island of Stability’ and indicate that we may have luck if we try to go even heavier,” said Ken Moody, Livermore’s team leader.

The “Island of Stability” is a term from nuclear physics that describes the possibility of elements which have particularly stable “magic numbers” of protons and neutrons. This would allow certain isotopes of some transuranic elements (elements with atomic numbers greater than 92) to be far more stable than others, and thus decay much more slowly.

Element 118 is expected to be a noble gas that lies right below radon on the periodic table of elements.

“The world is made up of about 90 elements,” Moody said. “Anything more you can learn about the periodic table is exciting. It can tell us why the world is here and what it is made of.”

“This is quite a breakthrough for science,” said Chemistry, Materials and Life Sciences Associate Director Tomas Diaz de la Rubia. “We’ve discovered a new element that provides insight into the makeup of the universe. For our scientists to find another piece of the puzzle is a testament to the strength and value of the science and technology at this Laboratory.”

Livermore has had a long-standing heavy element group since the inception of the Laboratory in 1952. The group has been successful in the discovery of several new elements over the years because it has access to unique materials to perform the experiments. In 1999 and 2001, the Laboratory announced the discovery of elements 114 and 116, respectively. In 2004, the Livermore-Dubna team observed the existence of elements 113 and 115.

As for the future, the LLNL-Dubna team will continue to map the region near the “Island of Stability.” In 2007, the team plans to look for element 120 by bombarding a plutonium target with iron isotopes.

“The heavy element community will continue to search for new elements until the limit of nuclear stability is found,” Mark Stoyer said. “It is expected that limit will be found.”