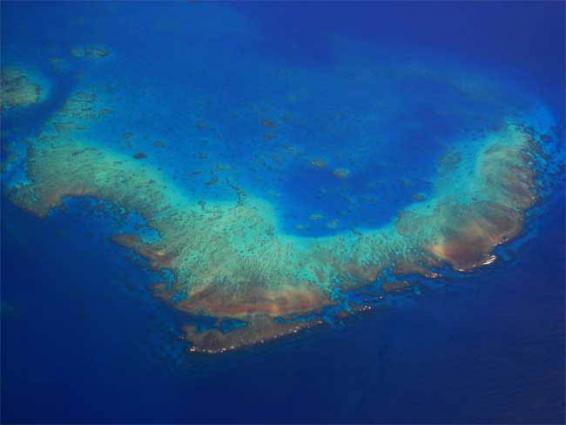 The Great Barrier Reef in Australia already has been affected by ocean warming and acidification. Image courtesy of Tourist Maker-Australia.

LIVERMORE, Calif. -- Lawrence Livermore scientists have discovered and demonstrated a new technique to remove and store atmospheric carbon dioxide while generating carbon-negative hydrogen and producing alkalinity, which can be used to offset ocean acidification.

The team demonstrated, at a laboratory scale, a system that uses the acidity normally produced in saline water electrolysis to accelerate silicate mineral dissolution while producing hydrogen fuel and other gases. The resulting electrolyte solution was shown to be significantly elevated in hydroxide concentration that in turn proved strongly absorptive and retentive of atmospheric CO2.

Further, the researchers suggest that the carbonate and bicarbonate produced in the process could be used to mitigate ongoing ocean acidification, similar to how an Alka Seltzer neutralizes excess acid in the stomach.

"We not only found a way to remove and store carbon dioxide from the atmosphere while producing valuable H2, we also suggest that we can help save marine ecosystems with this new technique," said Greg Rau, an LLNL visiting scientist, senior scientist at UC Santa Cruz and lead author of a paper appearing this week (May 27) in the Proceedings of the National Academy of Sciences.

When carbon dioxide is released into the atmosphere, a significant fraction is passively taken up by the ocean forming carbonic acid that makes the ocean more acidic. This acidification has been shown to be harmful to many species of marine life, especially corals and shellfish. By the middle of this century, the globe will likely warm by at least 2 degrees Celsius and the oceans will experience a more than 60 percent increase in acidity relative to pre-industrial levels. The alkaline solution generated by the new process could be added to the ocean to help neutralize this acid and help offset its effects on marine biota. However, further research is needed, the authors said.

"When powered by renewable electricity and consuming globally abundant minerals and saline solutions, such systems at scale might provide a relatively efficient, high-capacity means to consume and store excess atmospheric CO2 as environmentally beneficial seawater bicarbonate or carbonate," Rau said. "But the process also would produce a carbon-negative 'super green' fuel or chemical feedstock in the form of hydrogen."

Most previously described chemical methods of atmospheric carbon dioxide capture and storage are costly, using thermal/mechanical procedures to concentrate molecular CO2 from the air while recycling reagents, a process that is cumbersome, inefficient and expensive.

"Our process avoids most of these issues by not requiring CO2 to be concentrated from air and stored in a molecular form, pointing the way to more cost-effective, environmentally beneficial, and safer air CO2 management with added benefits of renewable hydrogen fuel production and ocean alkalinity addition," Rau said.

The team concluded that further research is needed to determine optimum designs and operating procedures, cost-effectiveness, and the net environmental impact/benefit of electrochemically mediated air CO2 capture and H2 production using base minerals.