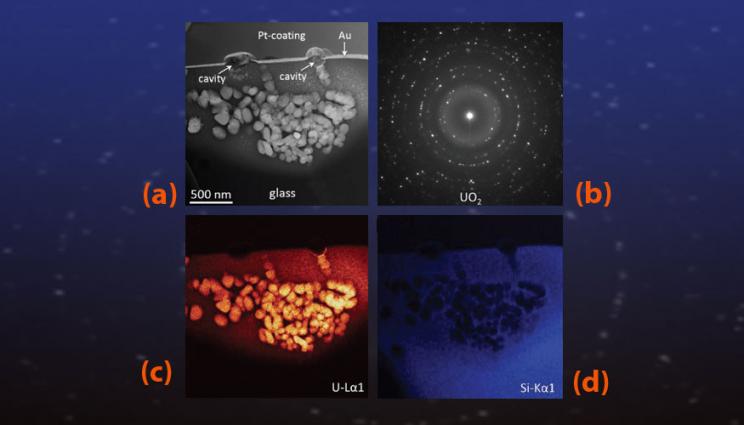 The images show a technique that Lawrence Livermore scientists have developed that provides a practical approach for looking into the complex physical and chemical processes that occur during fallout formation following a nuclear detonation. (a) A scanning transmission electron microscope image shows nano-crystals embedded into the top glass plate from (b) Corresponding selected-area electron diffraction pattern (c) and (d) X-ray EDS elemental maps of the nano-crystals. 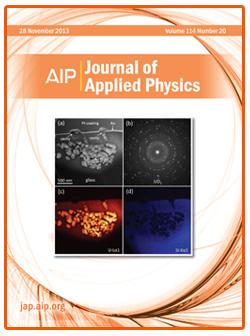 The research by Lawrence Livermore National Laboratory scientists for looking into the complex physical and chemical processes that occur during fallout formation following a nuclear detonation has appeared on the cover of the Journal of Applied Physics.

Anne M Stark, stark8 [at] llnl.gov, 925-422-9799
Lawrence Livermore National Laboratory researchers have begun to develop a technique that provides a practical approach for looking into the complex physical and chemical processes that occur during fallout formation following a nuclear detonation.

Post-detonation nuclear forensics relies on advanced analytical techniques and an understanding of the physio-chemical processes associated with a nuclear detonation to identify the device type and the source of the nuclear material in the device.

Fallout is a material formed from a cooling fireball following a detonation, in which unburned fuel, structural material and associated fission and activation products are incorporated with surrounding environmental material such as water, dust and soil.

Fallout can record chemical, physical and isotopic evidence showing the physical conditions and chemical environment associated with a detonation; however, despite years of studies, there is still a lack of understanding of what fallout characteristics tell about the underlying chemical and physical processes of its formation.

In a paper featured on the cover of the Nov. 28, 2013 issue of the Journal of Applied Physics, Lab researchers Zurong Dai, Jonathan Crowhurst, Christian Grant, Kimberly Knight, Vincent Tang, Alexander Chernov, Edward Cook, Johann Lotscher and Ian Hutcheon report on a study of materials recovered from a laboratory-generated plasma that mimics conditions relevant to fallout formation. "Our study begins to experimentally simulate and study the formation of debris subsequent to a detonation in which uranium-containing material interacts with the environment at high temperature," Crowhurst said.

The experiments entail exposing simple combinations of materials to the conditions present in the cooling fireball, followed by a detailed examination of the recovered materials using primarily scanning and transmission electron microscopy.

The team used a small-scale electric arc apparatus to generate uranium-containing plasma in air. The design of this apparatus builds on a previous project, led by Lab scientist Jim McCarrick, that developed a highly repeatable arc source to study the kinetics of energetic materials during phenomena such as lightning and electrostatic discharge. For this work, the lifetime of the arc was extended to more closely approximate conditions relevant to fallout formation.

The team found that the recovered solid debris was mostly in the form of spherules that had a wide range of sizes, chemical compositions and internal structures, implying that the debris was strongly affected by the environment where the heated material interacted.

Theoretical analysis indicates that a high temperature developed immediately after onset of the plasma, creating a momentary high pressure, which led to the plasma expanding as a shock wave through the narrow gaps between the sample and surrounding collection plates.

The results, together with the compact scale and relatively low cost of the system, suggest that the technique will lead to a practical approach for investigating the complex physical and chemical processes that occur when actinide-containing material interacts with the environment at high temperature.

The work carried was out under a Strategic Initiative entitled "Nuclear Forensics: An Integrated Approach for Rapid Response", led by Hutcheon.