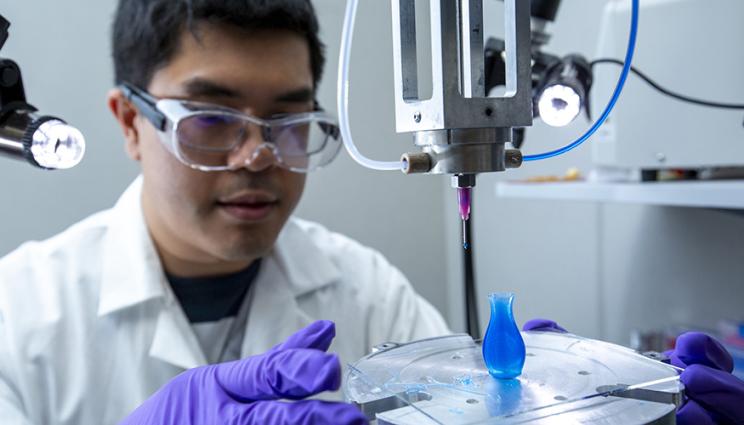 LLNL physicist Du Nguyen inspects a tiny flower vase printed using Tailored Glass by Direct Ink Writing technology, where the flow rate of two different glass-forming inks is adjusted to control the material composition emerging from the nozzle during the build. The vase is later converted to fully dense glass through a series of heat treatments. A team of Lab researchers, led by Rebecca Dylla-Spears and including Nguyen, won an R&D 100 award for their work. Photo by Jason Laurea/LLNL.

The trade journal R&D World Magazine recently announced the winners of the awards, often called the “Oscars of invention,” recognizing new commercial products, technologies and materials that are available for sale or license for their technological significance.

With this year’s results, the Laboratory has now collected a total of 176 R&D 100 awards since 1978. The awards will be showcased at the 60th anniversary R&D 100 awards gala, which will be held Nov. 17 in San Diego.

"It is a great tribute to the innovative spirit of our scientists and engineers to be selected for an R&D 100 award," Lab Director Kim Budil said. "Teaming with industrial collaborators is an important element in ensuring that the transformative technologies developed at LLNL will benefit the nation."

As a part of the process, the flow of multiple glass-forming inks is finely controlled to achieve the desired structure and optical properties. Subsequent heat treatment renders a dense, transparent glass product.

The technology enables fabrication of new kinds of optics and may reduce the need for small-tool finishing or joining processes for specialized optics. Similarly, the process allows cost benefits for low-volume custom glass manufacturing as new structures can be produced by the same equipment rather than requiring expensive custom molds, which can be cost prohibitive.

In addition, costs for power consumption and specialized work safety requirements may be reduced by allowing work at lower temperatures than those used for melting glass.

Some of the possible applications for the technology are producing flat custom lenses, lighter weight optics, custom containers, new support structures for catalysts, chemically tuned microfluidics and art, such as glass sculptures.

Paving the way for much higher power lasers

HELD’s multilayer dielectric gratings are composed of a base substrate upon which layers of dielectric mirrors with varying refractive indices are stacked, finally topped by a layer of ion-etched photoresist that is fine-tuned to the desired diffraction specifications.

The gratings developed by LLNL laser scientists, in collaboration with Spectra Physics-Newport, are able to deliver 3.4 times more total energy than the current state-of-the-art technology.

“This new grating configuration allows for significantly higher laser outputs and permits us to access new regimes of science,” said Hoang Nguyen, leader of the Lab’s Diffractive Optics Group. “We now can study science we couldn’t study before.”

With the new gratings and higher power lasers, some of the new physics areas that can be studied are gamma-ray flashes, generation of electron-positron pairs, radiation-friction force and Unruh physics.

Lab scientists and engineers have developed Energy Inks, a three-dimensional (3D) printer feedstock that allows the production of a functioning battery and other devices.

Although 3D-printing offers control and reproducibility to efficiently create optimized solid-state electrode architectures on a large scale, the inks required to make functioning components have not been available until now. Energy Inks not only enable the printing of battery and supercapacitor components but optimize their functional properties.

Since LLNL scientists and engineers developed Energy Inks, they have worked with researchers from the University of California, Santa Cruz and St. Louis-based MilliporeSigma, a global chemical and materials supplier. In 2021, MilliporeSigma introduced Energy Inks products to users for applications in consumer electronics, transportation and medical devices.

Researchers from the University of California, Santa Cruz also contributed to developing the graphene ink through electrochemical characterization and demonstration of the ink’s utility as a supercapacitor electrode.