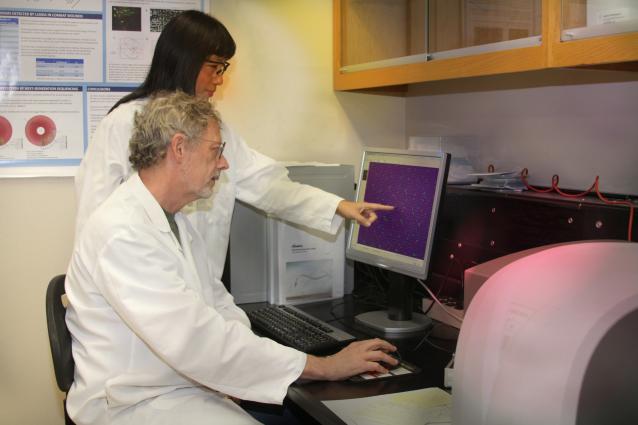 LLNL biologist Crystal Jaing and computer scientist Kevin McLoughlin analyze an image from the Lawrence Livermore Microbial Detection Array (LLMDA). The LLMDA has been used for the first time to study pathogens from ancient human remains. Photo by Julie Russell/LLNL 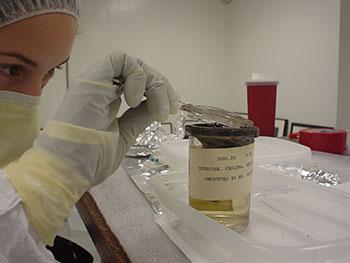 Scientists who study past pandemics, such as the 14th century Black Death that devastated much of Europe, might soon be turning to an innovative biological detection technology for some extra help.

The apparent first use of this technology, known as a microarray, for studying pathogens from ancient DNA, was reported today by a team of scientists in the daily online journal, Scientific Reports.

Researchers at McMaster University, led by Hendrik Poinar, an associate professor of evolutionary genetics, and Lawrence Livermore National Laboratory (LLNL) tested the application of a novel microarray, the Lawrence Livermore Microbial Detection Array (LLMDA), to identify human bacterial pathogens from archaeological remains. The team tested two samples that had been previously verified as containing pathogens through another technology.

One of the samples, an intestinal substance, showed the presence of cholera and was preserved from a patient who died from the disease during an 1849 outbreak in Philadelphia. The specimen was provided by the Philadelphia-based Mutter Museum.

The other sample tested with the LLMDA indicated the presence of Yersinia pestis (or plague) in a medieval tooth from 1348 from the East Smithfield burial ground in London. An estimated 30 to 50 percent of the European population succumbed to plague from 1347 to 1351.

Both Poinar and LLNL biologist Crystal Jaing believe that the Lab's LLMDA technology will be tenfold faster and tenfold less expensive than current genomic sequencing as a means of studying pathogens in ancient DNA.

"Microarrays may be a potential alternative solution, as well as a complementary tool, to genomic sequencing for studying ancient DNA," Jaing said. "It offers a faster and cheaper approach to studying complex samples."

Poinar, who is an expert on ancient DNA, agreed.

"We know that most bacterial pathogens likely go undetected in ancient remains due to the overwhelmingly strong contaminant signal from molecules that don't originate in human organs. One way to access this information would be to sequence everything in the sample and analyze it. But this is prohibitively costly and requires a lot of bioinformatics time.

"The LLMDA selectively targets pathogens that are likely to be of interest from an evolutionary standpoint and appears to work well with heavily degraded DNA, typical of most fossil and archival remains, so this is an excellent tool," Poinar continued.

Scientists studying the origins of infectious disease and population health over time normally find that ancient human remains contain highly degraded DNA in which the pathogen represents only a tiny fraction of the total DNA yield.

Ancient pathogen DNA is heavily mixed with other human and environmental DNA. Lengths of these fragments are often as small as 30 to 50 bases compared with regular DNA fragments that are hundreds to thousands of bases long. The amounts of pathogen in the two samples tested with the LLMDA were three ten-thousandths of the total sample for cholera and eight ten-thousandths for Y. pestis.

"We found other pathogens in the chlorea and Y. pestis ancient DNA samples," Jaing said, noting that tetanus was found along with Y. pestis.

Beyond showing the potential for microarrays to become a useful screening tool for archaeological samples, the team's findings demonstrate that the LLMDA can identify primary and/or co-infecting bacterial pathogens in ancient samples.

Developed in early 2008, the LLMDA permits the detection of any virus or bacteria that has been sequenced and included among the instrument's 135,000 probes -- on a one-inch wide, three-inch long glass slide -- within 24 hours. The LLMDA version run for the cholera and Y. pestis tests could detect about 1,850 viruses and about 1,400 bacteria.

While the Livermore instrument has previously been used to analyze the purity of infant vaccines, human clinical samples and diseased animals, it had not been deployed to study ancient pathogen DNA until this collaboration.

In Jaing's view, the value of studying ancient human remains for infectious disease is that the research can offer clues as to how past pandemics happened and why they were so deadly.

She noted that she believes the use of microarrays will speed up the discovery and identification of pathogens from ancient human remains.

"The LLMDA could serve as an excellent screening tool to rapidly identify pathogens. Then genomic sequencing could be used to provide detailed genetic comparison."

Genomic sequencing is the process of determining the precise order of the four different DNA bases -- adenine, guanine, cytosine and thymine -- within a cell of anything from bacteria to plants to animals.

Two other institutions participated in the research - the College of Physicians of Philadelphia (Mutter Museum) and the University of South Carolina.

"This collaboration has gone very well," Jaing said. "Our groups have complementary skills and expertise. Hendrik's group is a leader in biological archaeology and in analyzing ancient DNA. The LLNL team has expertise in microarrays, pathogen detection and bioinformatics."

In addition to Jaing, other LLNL scientists who worked on the research team were biologists Monica Borucki and James Thissen, along with computer scientists Jonathan Allen, Shea Gardner and Kevin McLoughlin.

During the past several years, LLNL has established collaborations to use its LLMDA with about 30 universities, companies and research centers, including Merck, the Naval Research Medical Center, the Centers for Disease Control and Prevention, Johns Hopkins University and Kansas State University, among others.