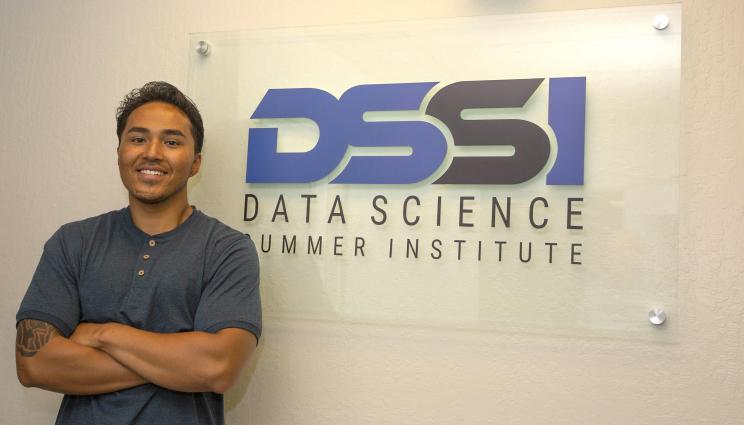 In partnership with Cal State University East Bay (CSUEB), the Livermore Lab Foundation (LLF) awarded Noun a one-year stipend to allow him to devote more time to academics by reducing work he needs to support himself.

The scholarship also will provide Noun the opportunity to work under the tutelage of nationally recognized scientists and engineers at LLNL. Noun was selected for this first-time internship/scholarship by a team of CSUEB, LLF and LLNL leaders.

Noun, 23, started his summer internship in the Data Science Summer Institute on June 17. He is working with one of the imagery teams developing neural network models using synthetic imagery for geospatial analysis under the mentorship of two Lab employees, Michael Ward and George Weinert.

"Since I started, I’ve been working on an old project my mentors shelved a few years ago. I’ve been troubleshooting it and making sure everything runs correctly before I update the program, and I’ve learned a lot," Noun said.

"It’s been great and inspiring to work at the Lab. In school, I’ve built a very basic foundation on the fundamentals of computer science from algorithms to data structures, but here I’ve been working on some larger projects which have helped me develop an entirely new set of skills."

When his summer internship ends Sept. 6, he will resume CSUEB classes and start weekly interactions with his LLNL mentors until graduation in May 2020.
The goal is to provide a research experience ensuring Noun will be better prepared to start a career appointment or graduate school.

"Now that I’ve been working at the Laboratory as an intern, I feel that I’ll be better prepared to enter the workforce when that time comes for me," he said.
"Most of my academic work consists of keeping my head down and studying by myself or with the occasional group project, so the knowledge I attain is limited to what my peers and I can consume. Having the opportunity to work with engineers and scientists on real-world projects will not only give me a whole new insight into the realm of computer science, but a breadth of knowledge I'd be unable to achieve alone."

Noun's extracurricular activities include work for the CSUEB Institute for STEM Education After-School scholarship/internship program. He is an assistant teacher with Scientific Adventures for Girls (SAfG), an Oakland-based nonprofit working to increase the number of women in STEM by offering after-school science enrichment to girls. Through SAfG, Noun co-taught third-fifth graders in hands-on STEM areas including carnival science and slime science.

"I’ve had a fascination with science and technology since I was young," Noun said. "I love seeing the smiles on the faces of the students as they witness science in action."

Noun grew up in Modesto, well within the Bay Area tech industry’s sphere of influence. His dream job is to be a software engineer and work on cutting-edge technology, notably artificial intelligence.

"My uncle was always building computers, so I had exposure to how fascinating technology can be from an early age," Noun said. "But it wasn't until recently that I decided to take the full dive into becoming a software engineer."

"Enticed" by the idea that creativity and activities that positively impact other people’s lives are of paramount importance, Noun explored a variety of career options, including acting and writing.

Then he "stumbled across" programming, the combination of creativity and social impact for which he’d been searching, Noun recalled. "Conceptualizing an idea, coming up with creative solutions to solve complex algorithms and my current work at Scientific Adventures for Girls encapsulates everything I've wanted to do since I was young."

The LLF is a 501(c)(3) nonprofit dedicated to advancing fundamental knowledge, creating transformative technologies and enhancing human health, safety and quality of life for current and future generations. It carries out this mission by seeking philanthropic contributions to support scientific education, research and innovation at the LLNL.

For more information on the foundation, visit the Livermore Lab Foundation Website.