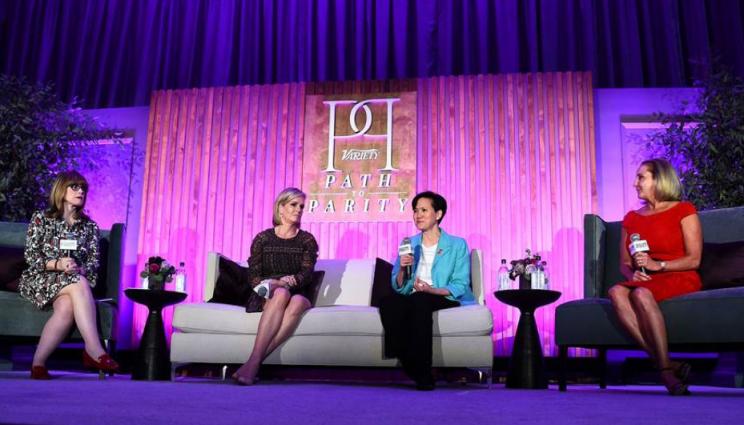 Lawrence Livermore computational biologist Felice Lightstone (second from the right) served as a member of the health parity panel at the June 6 inaugural Variety Summit in West Hollywood about gender disparities in the media and entertainment industries. The panel was moderated by Nancy Brown (far left), the CEO of the American Heart Association; and included Jennifer Ashton (second from the left), a medical doctor (OBGYN) and the chief medical reporter for ABC News; and Lori Mosca, a professor of medicine emerita and executive director of an AHA research center at Columbia University Medical Center.

Most scientists aren’t involved with Hollywood, even for a day.

But earlier this month, Lawrence Livermore National Laboratory (LLNL) computational biologist Felice Lightstone served as a panelist at a major Hollywood forum, the inaugural Variety Summit about gender disparities in the media and entertainment industries.

Lightstone, the principal investigator for a cooperative research and development agreement (CRADA) with the American Heart Association (AHA), was invited to be a speaker on the health parity panel by AHA CEO Nancy Brown.

Brown served as the moderator for the panel that included Lightstone; Jennifer Ashton, a medical doctor (OBGYN) and the chief medical reporter for ABC News; and Lori Mosca, a professor of medicine emerita and executive director of an AHA research center at Columbia University Medical Center.

"I thought the panel was amazing and extremely well-qualified to discuss women’s health issues," said Lightstone, who is part of the Lab’s Biosciences and Biotechnology Division within Physical & Life Sciences.

"My role was to talk about the importance of having women in STEM (science, technology, engineering and mathematics) and the need to have women in decision-making positions for research.

"I also discussed the use of technologies such as high-performance computing and artificial intelligence in providing equity in medicine between men and women in the future," Lightstone continued.

Mosca told the audience that men and women have different symptoms for heart attacks, adding that while the AHA originally only provided the symptoms for men, that has since changed.

Held June 6 at the Jeremy Hotel in West Hollywood, the Variety forum was timed to coincide with the release of the media conglomerate’s Equality Index. The aim of the conference was to accelerate the advancement of women and equality in entertainment and media executive suites, boardrooms and sets.

In addition to the panel on health parity, other discussions for the "Path to Parity" forum centered around "Parity in the Writers’ Room," "Know Your Rights -- Fighting for Fair Treatment" and an "Industry Leaders Keynote Roundtable."

The Lab’s three-year, $6.9 million CRADA with the American Heart Association started in November and aims to produce new algorithms to advance drug design and development.

Under the project, a team of Livermore researchers is seeking to use high-performance computers to create a database of interactions between human proteins and small drug-like molecules. In turn, this information could spell out which human proteins should be avoided for safety reasons and which chemical compounds are effective.

"Our CRADA is going well. We plan to have a draft database prepared by the end of our first year and we’re still learning the needs of the community," Lightstone said.

A short video on some of the June 6 activities from the Variety "Path to Parity" can be viewed on the web.