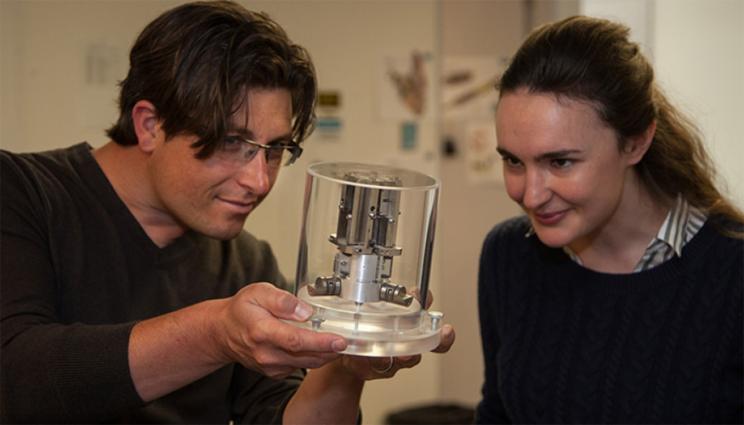 Louisa Pickworth and Jay Ayers examine a mirror pack for the KBO diagnostic. Since joining NIF in 2013, Pickworth has contributed to several groundbreaking scientific advances.

Learning to love science from gazing at planets

The moment Louisa Pickworth saw the rings of Saturn through her father’s backyard telescope, she knew she wanted to become a scientist to learn "more and more and more."

She was promoted earlier this year to become a group leader in the Physics Division of the Lab’s Physical and Life Sciences (PLS) Directorate, which researches areas ranging from astrophysics and planetary science to condensed matter and atomic and plasma physics.

And in a facility designed with "poetic engineering" to meet the most exacting criteria for every specific purpose, the experimental physicist is getting the chance to fulfill her childhood thirst for knowledge.

"Every day you get to learn something new and that’s just thrilling," Pickworth said. "I’m so lucky to get to do that in my career. And what we’re doing here at NIF is an amazing challenge. Just to be part of it is brilliant."

Since joining LLNL as a postdoctoral researcher in 2013, Pickworth has contributed to several groundbreaking scientific advances at NIF, including research on using a Lab-designed plasma optic to combine several lasers into one superbeam. She was the lead scientist for a collaboration between the NIF&PS and PLS directorates that developed a new Kirkpatrick-Baez Optic (KBO) diagnostic with a unique telescoping snout that allowed it to squeeze into the cramped space between the end of the diagnostic instrument manipulator and the target bay’s inner wall. The KBO reflection X-ray microscope was able to obtain higher-resolution images of hot spots at the heart of target capsules during an ICF implosion.

That led to discoveries about how ICF implosions were affected by the microscopic tubes used to fill the target capsule. The diagnostic confirmed that even at 10 microns (millionths of a meter) in diameter, the fill tubes were causing perturbations very early in shots that led to asymmetries in NIF implosions. The new techniques are described in a Physics of Plasmas paper published online Aug. 14.

Getting down to five-micron tubes has resulted in "big improvements," Pickworth says, "and we’re now working on getting down to two microns (a human hair is about 60 microns in diameter). It’s really amazing engineering, which is being pushed by our scientific understanding of what’s causing this perturbation."

She shies away from taking personal credit for the work and is quick to point out that her contributions are just one of many that go on every day toward the advancement of NIF’s missions of Stockpile Stewardship and ICF research.

"Every experiment we do on NIF is this amazing choreography of exceptional and miraculous things coming together at one time," Pickworth said. "I feel incredibly privileged to be involved in every experiment I get to do on NIF. I get to work with fantastic people."

Born in Reading, England, Pickworth’s interest in science started when she was 13 and her father, a software engineer, installed a telescope in the family’s backyard.

She fondly remembers the time she first saw Saturn and its rings through the eyepiece in real time, with the image seemingly "wiggling a little bit" due to the effects of viewing it through Earth’s atmosphere.

"The longer you looked, the more you saw this was an evolving, real object," Pickworth said. "That’s a humbling, awe-inspiring experience. There was so much going on there, I wanted to know more about it. That really propelled me to wanting to know more and more and more."

From astronomy to plasma physics

Although she first wanted to study astronomy, an internship three years later steered her to physics. Pickworth, then 16 and still in high school, had the chance to work at the Joint European Torus (JET), the tokomak magnetic fusion facility at the Culham Centre for Fusion Energy, the United Kingdom’s national fusion research lab in Oxfordshire, England.

"I had a patient supervisor who took me on, when I really knew nothing, and showed me the physics and the excitement of working in fusion, as well as allowing me to get my hands on the diagnostics," she said. "And that was really, really fun. I saw there were these big billion-dollar machines and I knew I wanted to be involved in those in the future."

Pickworth became a physics major at Imperial College London, where she served as a summer intern at the school’s Mega Ampere Generator for Plasma Implosion Experiments (MAGPIE), a pulsed-power generator focused on plasma physics research. Her work there included experiments in the MAGPIE Z-pinch facility, which uses magnetic-field-generating electrical currents in plasma to achieve compression.

She was part of a team of students and postdocs that fabricated targets and designed diagnostics and experiments, which was "an incredibly holistic and fantastic experience," she said.

The work helped her better understand, for example, "how thin a five-micron foil is or how one piece of metal fits into another, what’s physically and mechanically possible," she said. "It gave me an appreciation for the amazing work that target fabrication does and the amazing work that goes into building and operating NIF."

"Physics is amazing because you keep opening up and investigating, you get really into it and there’s still more material to open up and investigate," Pickworth said. "So even though now I’m very specialized in the work I do, there’s so much that I appreciate that I don’t know and that I’m still excited about learning. That keeps me coming back every day to learn from my amazing colleagues, who are experts."

Earlier this year, Pickworth was promoted to group leader for X-ray diagnostics and measurement science, with a focus on imaging. She says she enjoys the new challenge, which involves managing both people and projects. 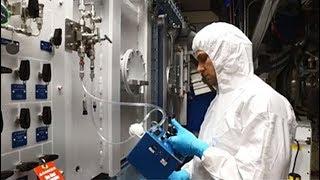 Outside of NIF, Pickworth has recently taken up a hobby that involves shots of another kind -- archery. She also enjoys exploring California’s state and national parks and dabbles with playing the violin, piano and guitar.

And she finds time to volunteer as a mentor at Las Positas College and participate in Lab-sponsored community STEM outreach events. This year, she co-managed the NIF & Photon Science Summer Scholars Program with longtime manager Reggie Drachenberg.

Pickworth advises students to "keep an open mind about what you don’t know, and go out and vigorously try to learn."

What would Pickworth say to her 13-year-old self as she gazed in wonder at the heavens?

"Don’t dwell too much about what’s gone, dust yourself off, learn from your mistakes and move on."