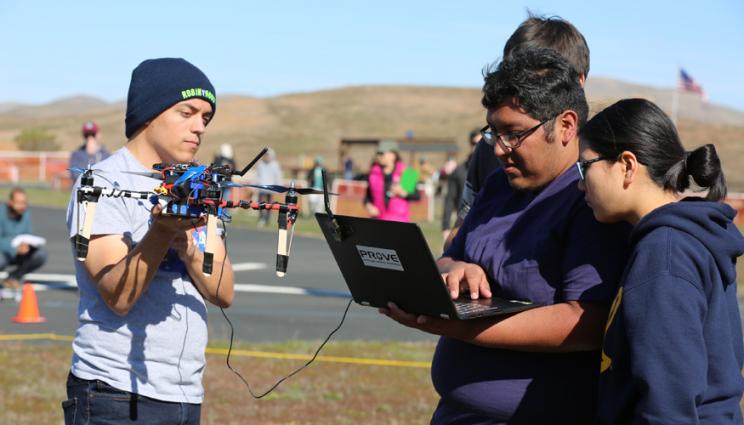 The drones whizzed, hovered and soared, racing around a circular "track" and dropping ball-bearings on tarpaulin targets from high above. Four teams, comprised of engineering students from Cal Poly-San Luis Obispo were going head-to-head in a Lawrence Livermore National Lab-sponsored Design Challenge, putting their custom-built drones to the test with scholarships, awards and bragging rights at stake.

The teams, who spent months designing, building and testing out their quadcopters, started by speeding around the field outside Cuesta College on Feb. 24 for time trials, and then tried their hands at a precision target competition, fighting blustery conditions and technical challenges. Most of the drones were designed to fly autonomously, using GPS coordinates to maneuver, stay airborne and lock onto their targets. The winning team, "Unified Aerial Victory," received a scholarship and special recognition from Cal Poly’s Multicultural Engineering Program (MEP), an LLNL/CalPoly trophy and a VIP visit to the Lab over spring break -- a reward for their precise, speedy run and for hitting four of the six targets. 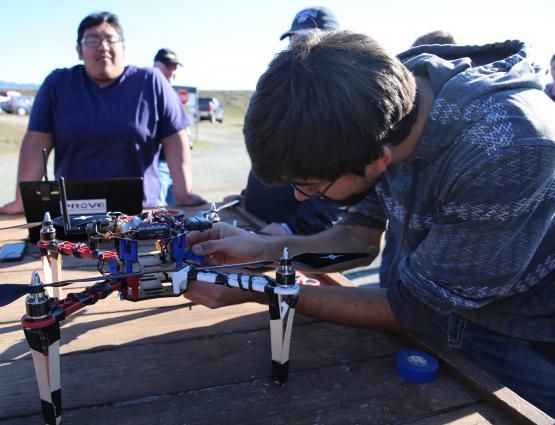 Albright’s team had devised a unique design for its ball-bearing deployment system, a 3D-printed dial on the underside of the drone that rotated when it hovered over the drop zone. Team members said they started brainstorming designs in November and met almost every weekend outside of school to test and tinker with their machine. Third-year electrical engineering student Katie Coleman said the project gave her a sense of focus and a way to apply the skills she’d learned in class.

"I think it was really cool to have a project and see it through from start to finish together," Coleman said. "At first, we got this box (of drone parts) and thought, ‘What is this?’ Now, it’s a working drone that we created, and it’s just a cool experience to get to share what we learned and add to other people’s resources."

The runners-up, Team "TBenz," also came away with an invite to tour the Lab. To do so, they had to overcome issues with communication on their autonomous drone but were able to retool it successfully enough to hit their targets. Senior electrical engineering student Brett Glidden said he appreciated the opportunity to have a hands-on project that utilized his experience in Computer-Aided Design (CAD).

"We’d never had a problem with telemetry before, so we didn’t really plan for it, but luckily we got it working at the very end," Glidden said. "Just being able to go out here and work with these technologies that we wouldn’t really get the opportunity to work with is great. I was really excited to work with this team and work on this project."

The 25 students who participated in the first-of-its-kind challenge were all part of Cal Poly’s Multicultural Engineering Program, a retention program designed to graduate engineering students from the school’s underserved population, including first-generation and minority students, those from low-income backgrounds and transfer students.

MEP coordinator Jackie Duerr said the challenge provided the undergrad students the opportunity to take part in an in-depth project exposing them to higher-level skills that could translate to future careers in engineering.

"We have been able to link Lawrence Livermore National Lab to students in a way that bolsters their resume, but also provides the opportunity for networking and collaboration," Duerr said. "Our greatest goal is for students to see light at end of the tunnel. Collaborations like this help students see that light." 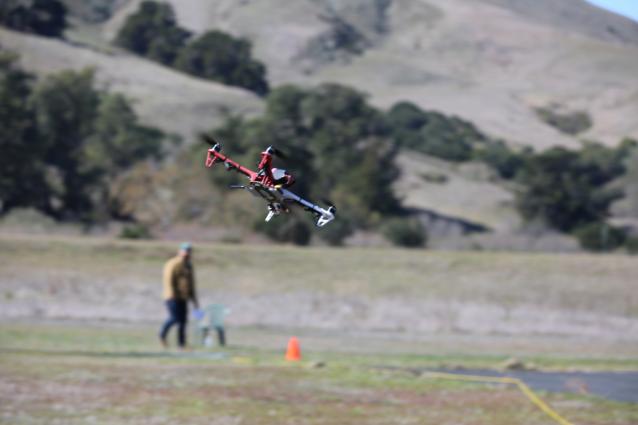 Because the average GPA of students in the MEP program is below that of typical Cal Poly engineering graduates, MEP adviser Megan Schuler-Jones said the event allowed the students to prove there was more to them than simply grades, and it gave LLNL the chance to see talent it might not otherwise see.

"The fact that Livermore has taken so much time to grow this small group of students’ skillsets is a big deal," Schuler-Jones said. "They have really mentored and helped the students, so I hope they feel cared for, and see Livermore as a good place for them to work. I hope they feel they have something new for their résumé for a future career opportunity no matter where they go."

Past LLNL summer student interns coached the teams throughout the design process and other Lab employees engaged with guidance along the way. Livermore Lab’s Engineering Recruitment and Diversity Manager Beth McCormick proposed the idea for a drone competition more than a year ago as a way for the Lab to not only work with students, but also identify potential talent in autonomous drone research, an up-and-coming area of interest for the Lab.

"We wanted to teach them about a true engineering design approach, project management and all the things they usually don’t learn until their senior year," McCormick said. "And they get to fly drones and have fun. What we’re really after is looking for those students that come up with the best, most innovative ideas and try to get them internships. That’s really the bottom line."

LLNL recently received approval for a "drone pen" that will allow researchers to test autonomous drones onsite and possibly invite students to the Lab to fly. LLNL engineer Ryan Goldhahn, a member of the Lab’s collaborative autonomy team researching AI-equipped drones and other "smart" vehicles, took advantage of the event to recruit and educate the students on the latest developments in that area.

"It’s a newer capability for the Lab." Goldhahn said. "Building our expertise and competence in this area involves hiring folks like the students here, who have flown vehicles, crashed vehicles and have already gotten their hands dirty with some of the machines we’ll be interested in in the future…If we can provide hardware or a venue like this, it’s going to help them build their knowledge to become the experts that we’re excited about hiring."

Many students said they had never had experience with drones prior to the challenge, but after seeing the fruits of their months-long collaboration, were considering exploring drones as a possible career focus and making LLNL their first choice after college. McCormick said the Lab plans to bring a more advanced version of the event to Cal Poly next year.