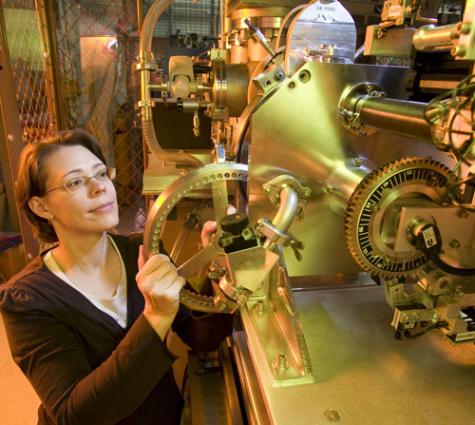 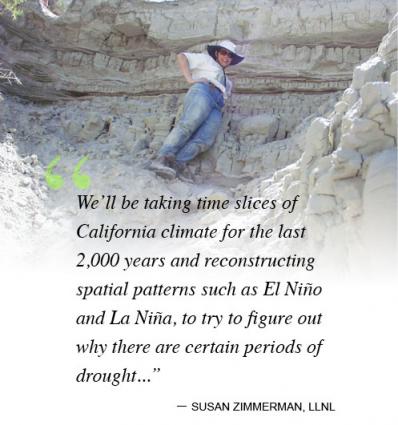 By analyzing sediments up to 4,000 years old, Susan Zimmerman is hoping to provide a tool to help predict future climate change.

Ancient records of what was happening with climate conditions can be used with regional climate models to tell a story of what happened in the past and to correlate it to the present and the future. Current models typically use data only for the last 100 years or less and may miss wet and dry periods from past millennia.

Specifically, Zimmerman, who works as an environmental scientist at the Center for Accelerator Mass Spectrometry (CAMS), along with colleagues Tom Guilderson and Tom Brown, are mapping patterns of past droughts in California by looking at lake sediments from the late Holocene period (0-4,000 years ago).

Zimmerman is working with researchers across California to analyze lake sediments and develop records that span the last two millennia. These records will be used to map previous drought patterns in California and help climate modelers more accurately simulate the range of natural climate changes. With this information, state agencies can better determine the infrastructure needed to meet future demands for water.

Zimmerman's interest in lake sediments and their relationship to climate started when she was earning her Ph.D. at Columbia University, where she worked with geochemist Sidney Hemming at the Lamont-Doherty Earth Observatory. Outside of the LDRD project, she continues collaborating with Hemming to radiocarbon date sediments from Mono Lake, which borders the Eastern Sierras. In sediments there from the last Ice Age (about 14,000-67,000 years ago), she found ostracodes, millimeter-scale crustaceans, that she plans to radiocarbon date at CAMS. Since shells from Mono Lake sediments can be difficult to radiocarbon date, Elena Steponaitis, an undergraduate student of Hemming's, will visit CAMS this month to perform an experimental leaching technique to try to measure the age of the shells more accurately.

"We want to determine what age they are and what they can tell us about the climate back then and what the lake was like," Zimmerman said. "We're very interested in the timing of the last big lake rise and subsequent drop at Mono Lake, and how those extremes fit into the warm/cold changes in Greenland and strong/weak monsoons in Asia at the end of the last Ice Age."

The LDRD project will go a step further, to radiocarbon date sediments from other lake in California where collaborators are developing paleoclimate records. Using the precise, high-resolution radiocarbon chronologies, the team will correlate the records to develop maps of precipitation variability in California over the last 2,000 years. In turn, this information will help improve the reliability of climate models to predict future climate change.

"We'll be taking time slices of California climate for the last 2,000 years and reconstructing spatial patterns such as El Niño and La Niña to try to figure out why there are certain periods of drought, such as the medieval anomaly (warming period)," Zimmerman said.

Lakes are natural climate observation stations, and paleoclimate records from lake sediments have the potential to provide similar resolution to tree rings while spanning much longer periods of time. Sediments from the last several thousand years are often straight-forward to date with radiocarbon, and CAMS is an ideal facility for the required high-density and high-precision dating.

The length of the records used for model control runs and diagnostics must be extended to capture the potential range of climate variability, including the mega-droughts of the medieval period (AD 900-1300). The width of tree rings in water-stressed areas is an annual-resolution record of changes in past precipitation, but the majority of the records available begin after AD 1400, and thus capture only the last 600 years.

Zimmerman's team is coordinating with the Lab's Program for Climate Model Diagnosis and Intercomparison (PCMDI) scientists working to modify the Weather Research and Forecast (WRF) model for regional climate prediction to provide concrete diagnostic tools for assessing the ability of the models to represent the climate system in the past, present and future.