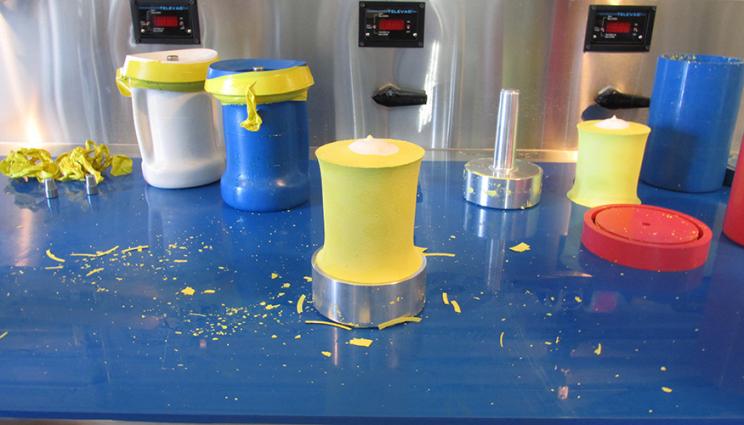 This photo shows the group of pressings made from the new PBX 9502 received from Holston.

High explosive (HE) research, development, test and evaluation work at Lawrence Livermore National Laboratory (LLNL) continues to meet the needs of the nation on behalf of the National Nuclear Security Administration (NNSA).

One specific effort is the HE pressing capability, which is a critical component of the LLNL’s national security mission.

The scope of the Lab’s HE mission includes pressing parts for various weapons programs that execute integrated and small-scale experiments. The pressed parts — machined to final shape, as needed — help investigate HE molecules and formulas, retain the capability to evaluate previously used formulas and maintain the capability in support of NNSA’s Stockpile Stewardship and Management Plan and other NNSA research applications, such as nonproliferation and nuclear counterterrorism.

“I applaud the perseverance and creativity of our workforce and the commitment in ensuring that the Lab bolsters its capabilities in high-explosive isostatic pressing at Site 300,” Leininger said. “The team restored, modified and successfully installed a press that was going to be excessed by Pantex, showing our commitment to being good stewards of taxpayer funding and enhancing our capability to manufacture parts that are of the same quality produced at Pantex.”

The Lab recently accomplished its first pressing operation with explosives in the refurbished Bldg. 809 complex. Coming in at a larger diameter compared to the presses in the Bldg. 817 complex, LLNL now has additional capacity and flexibility to better support its weapons and nuclear counter-terrorism missions.

The first pressing operation with explosives in the refurbished Bldg. 809 complex was successfully completed in late March. In the following five months after initial startup, 92 individual billets and hemispheres have now been pressed, involving nearly 1,000 pounds of explosives and including important legacy materials (vintage 1980s) as well as newly manufactured development lots of material (vintage 2019-2021).

“These pressings have provided high-quality feedstock for dozens of downstream focused and integrated experiments whose successful completions are critical to accomplishing the Laboratory’s mission,” said Franco Gagliardi, staff scientist in the Materials Science Division and LLNL’s Explosives Production Integration manager. “After many years of refurbishment, the Bldg. 809 Iso-static Pressing Facility is now able to press explosives.”

“As weapons infrastructure project manager for this effort, I’m extremely proud our team was able to work with all the key stakeholder to bring this capability online,” said Chris Adams, a weapon infrastructure associate program leader for the Capabilities Based Investment program.

Adams reiterated on Gagliaradi’s comment on the process taking several years, but also noted the group was able to successfully complete the project, as there were two prior efforts that were not successful. The work included revitalization of the Bldg. 809 facility complex as well as the press and supporting program equipment which was funded from NNSA’s Office of Production Modernization, Capability Based Investment program. Additionally, the first use program (W80-4) funded the final operational effort for this capability.

“The material used in the first pressings at Bldg. 809 was chosen because we had a well-developed understanding of the material’s compaction behavior as a function of pressure and temperature,” Gagliardi said. “As such, this lot was seen as a very good candidate to do a cross-check of pressing processes, moving from Bldg. 817 to Bldg. 809 in preparation for the pressing of the new development plastic bonded explosives (PBX) 9502.”

LLNL got the press operational at an important time for the programs. Some of the first billets were pressed the day after the much-anticipated arrival of the newest batch of PBX 9502, a triaminotrinitrobenzene (TATB)-based explosive material, made for the W80-4 life extension program (LEP) produced at the Holston Army Ammunition Plant.

This press is a key capability underpinning the LLNL Energetic Materials Development Enclave Campus concept, enabling LLNL’s Weapons and Complex Integration’s (WCI) strategic objective to significantly accelerate the design to production cycle to be agile for the future deterrent.

“Improving our HE pressing capability is a much-needed major step forward in modernizing our HE infrastructure to support the W80-4 and W87-1 modernization programs,” said Derek Wapman, WCI's deputy for Program Planning and Execution. “It also will enable LLNL to better support the NNSA’s HE development and modernization efforts.”

LLNL began investigating isostatic pressing in 1956 during a transition period in the nuclear weapons complex when the national laboratories were considering a move from cast HE main charges to plastic-bonded explosives.

Specific discussion of the design considerations and parameter studies took place to install the first 8-inch diameter and 18-inch diameter presses at what would become LLNL’s Site 300. Isostatic pressing techniques were not expected to substitute for conventional ram-and-die operations and they were investigated because of Livermore’s research mission and the variety of materials, shapes, intricacy of shape and size that could be evaluated.

In 1978, subsequent LLNL work on neat TATB and TATB/Kel-F powders was conducted on the 14-inch diameter and 18-inch diameter isostatic press.

LLNL currently heats the press as an enhancement to ensure that the temperature in the pre-heated powder stays sufficiently high during pressing and to minimize thermal gradients that could lead to density gradients.