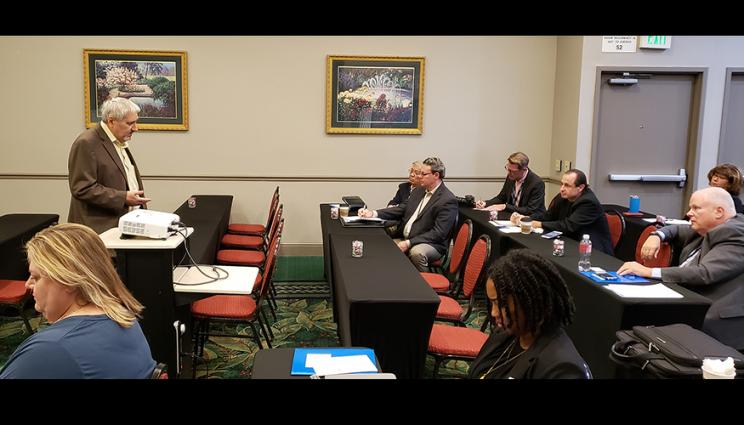 Lab Director Bill Goldstein was the keynote speaker for the Federal Laboratory Consortium’s Far West/Mid-Continent regional meeting held Nov. 6-7 at the Hilton Garden Inn in Livermore. Goldstein spoke on the importance of tech transfer at the Laboratory. At the far right is Rich Rankin, the head of LLNL’s Innovation and Partnerships Office. Photo by Carrie Martin/LLNL

This year’s awards, one for technology development, another for commercialization success and a third for partnership collaboration, were presented Nov. 6 during the FLC’s two-day Far West/Mid-Continent regional meeting at the Hilton Garden Inn in Livermore.

Last week’s FLC gathering marked the first time the organization held one of its regional meetings in Livermore.

“We are excited that LLNL was chosen to be the host for this year’s FLC regional meeting,” said Hannah Farquar, a business development executive (BDE) in the Lab’s Innovation and Partnerships Office (IPO) who represents the Lab with the FLC.

“Livermore is a great location for the meeting being situated in the Bay Area, home to many federal labs, including two national labs. The FLC is a great resource, and regional meetings give us the opportunity to learn from and forge relationships with other federal labs from agencies such as NASA, the Department of Defense, the U.S. Department of Agriculture and the U.S. Forest Service, among others,” Farquar added.

The keynote speaker for this year’s regional conference was Lab Director Bill Goldstein, who delivered a presentation on the importance of tech transfer at the Laboratory, and how the “spin-out/spin-in” nature of tech transfer fits within the Lab’s overall strategy.

IPO Senior Adviser Roger Werne was a member of a panel discussion on diversity and inclusion, BDE Yash Vaishnav served on a panel about biotechnology and tech transfer, BDE Charity Follett spoke about the vitality of protecting software, and Farquar moderated a panel on collaboration, best practices and regional success stories.

Since 2007, with the three awards LLNL captured last week, the Laboratory has now garnered 36 regional awards for technology transfer from the FLC.

Since its inception in 2013, Spack has grown and is widely available as open-source software. Spack’s original 100 or so packages have blossomed into a library of more than 3,500, and a large and active community of more than 450 contributors regularly adds features and improvements.

Spack is used for software deployment on six of the world’s top 10 supercomputers and it has been adopted by several HPC centers and software development communities.

While LLNL led the initial development of Spack, the software’s co-developers include 13 other institutes, national laboratories and computing centers.

IMPEDE, which has been cleared by the Food and Drug Administration for use in the U.S. and has been cleared for use in Europe. IMPEDE reduces the blood flow through diseased or damaged vessels that can occur in abdominal aortic aneurysm endoleaks, gastric and esophageal varices or blunt trauma.

To date, more than 250 patients have been successfully treated worldwide with IMPEDE for conditions such as deformed arteries, tumor resections (where blood flow has been blocked to tumors) and pelvic congestion syndrome, with no reported adverse effects.

“This award is testimony to the ability of a national security lab to develop technologies that could be turned into commercial products that save human lives,” said Genaro Mempin, the IPO BDE who works with this technology. “Shape Memory Medical Inc. has taken big risks to become the first company to secure both FDA and European clearances for a medical device based on shape memory polymer technology.”

Their project, the CyberSecure Integration of Networked DER (CINDER), integrates an LLNL-developed cyber-risk analysis toolset with Distributed Energy Resources (DERs) that can generate solar power and are deployed at DoD’s White Sands Missile Range and the VA Medical Center facility in Las Vegas.

While the project has showcased how an integrated patch and network analytics/management solution can mitigate risks to the cyber operations of microgrids, the CINDER partnership has demonstrated how stakeholders can accomplish a larger task together than they could achieve alone.

“Partnerships are essential for the work that we do to be successful,” said Nate Gleason, leader of the Cyber and Infrastructure Resilience Program within Global Security’s E Program. “In order to have real-world impact, we depend on partnerships with industry and others to ensure our solutions make sense from an operational perspective and are able to transition into practice.”