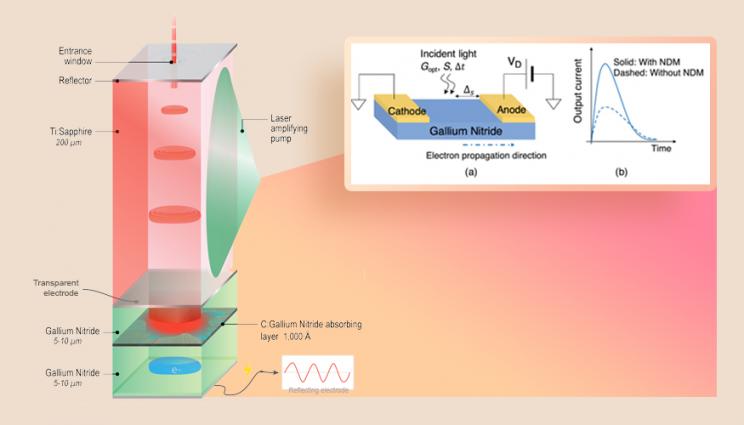 Lawrence Livermore National Laboratory engineers have designed a new kind of laser-driven semiconductor switch that can theoretically achieve higher speeds at higher voltages than existing photoconductive devices. If the device could be realized, it could be miniaturized and incorporated into satellites to enable communication systems beyond 5G, potentially transferring more data at a faster rate and over longer distances, according to researchers.

Lawrence Livermore National Laboratory (LLNL) engineers have designed a new kind of laser-driven semiconductor switch that can theoretically achieve higher speeds at higher voltages than existing photoconductive devices. The development of such a device could enable next-generation satellite communication systems capable of transferring more data at a faster rate, and over longer distances, according to the research team.

Scientists at LLNL and the University of Illinois Urbana-Champaign (UIUC) reported on the design and simulation of the novel photoconductive device in a paper published in the IEEE Journal of the Electron Devices Society. The device utilizes a high-powered laser to generate an electron charge cloud in the base material gallium nitride while under extreme electric fields.

Unlike normal semiconductors, in which electrons move faster as the applied electrical field is increased, gallium nitride expresses a phenomenon called negative differential mobility, where the generated electron cloud doesn’t disperse, but actually slows down at the front of the cloud. This allows the device to create extremely fast pulses and high voltage signals at frequencies approaching one terahertz when exposed to electromagnetic radiation, researchers said.

“The goal of this project is to build a device that is significantly more powerful than existing technology but also can operate at very high frequencies,” said LLNL engineer and project principal investigator Lars Voss. “It works in a unique mode, where the output pulse can actually be shorter in time than the input pulse of the laser — almost like a compression device. You can compress an optical input into an electrical output, so it lets you potentially generate extremely high speed and very high-power radio frequency waveforms.”

If the photoconductive switch modeled in the paper could be realized, it could be miniaturized and incorporated into satellites to enable communication systems beyond 5G, potentially transferring more data at a faster rate and over longer distances, Voss said.

High-power and high-frequency technologies are one of the last areas where solid state devices have yet to replace vacuum tubes, Voss added. New compact semiconductor technologies capable of operating at more than 300 gigahertz (GHz) while delivering a watt or more in output power are in high demand for such applications, and while some high electron mobility transistors can reach frequencies higher than 300 GHz, they are generally limited in energy output, researchers reported.

“Modeling and simulation of this new switch will provide guidance to experiments, reduce costs of test structures, improve the turnaround and success rate of laboratory tests by preventing trial and error and enable correct interpretation of experimental data,” said lead author Shaloo Rakheja, an assistant professor in the Department of Electrical and Computer Engineering and resident faculty at the Holonyak Micro and Nanotechnology Laboratory at UIUC.

Researchers are building the switches at LLNL and are exploring other materials such as gallium arsenide to optimize performance.

Funded by the Laboratory Directed Research and Development program, the goal of the project is demonstrating a conduction device that can operate at 100 GHz and at a high power. Future work will examine the impact of heating from the laser on the electron charge cloud, as well as improving understanding of the device’s operation under an electrical-optical simulation framework, the team reported.