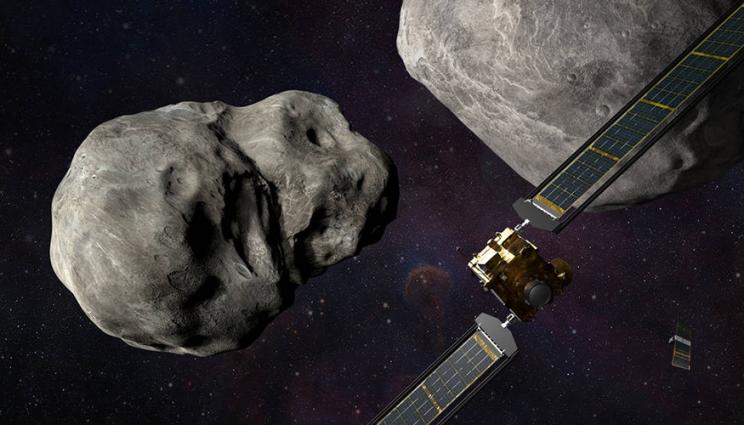 The Double Asteroid Redirection Test (DART) will examine technologies that will prevent an impact of Earth by a hazardous asteroid. DART is the first demonstration of the kinetic impactor technique to change the motion of an asteroid in space. The asteroid is a small moon of a larger asteroid called Didymos. The impact into Dimorphos does not pose any danger to Earth.

LLNL’s role as participants in the DART mission include a working group focused on modeling the impact and deflection of the asteroid.

Megan Bruck Syal, who leads LLNL’s Planetary Defense group, said she looks forward to the experiment and is excited to assist NASA and the Lab’s mission partners to use this experiment to help advance the science of planetary defense.

“Our team has been supporting DART with impact simulations and analysis since 2015, and it is an incredible feeling to be on the precipice of its launch,” Bruck Syal said. “DART is an essential first test of kinetic impact deflection effectiveness and will inform how we model asteroid response to a variety of mitigation techniques in the future. Many students, postdocs and staff at LLNL have contributed to our preparedness for this experiment; it is a true interdisciplinary team effort.”

Katie Kumamoto, a LLNL geoscientist and a member of the LLNL impact modeling team, said DART is a groundbreaking mission and a big step toward practical asteroid preparedness.

“We don’t have a lot of data on the properties of asteroids, like their strength or density, but these properties can have a large effect on the magnitude of the deflection we would get from a kinetic impact,” she said. “DART is thus a two-fold opportunity, to both demonstrate that we can actually deflect an asteroid in space and get us more data on the properties of asteroids, which will help us prepare for potential future impacts.”

Team member Cody Raskin has helped develop simulation tools and methods for the inverse problem of determining the asteroid’s material properties by measuring its response to the impact of the DART spacecraft. This includes adapting machine learning techniques to characterizing the mapping that connects asteroid material properties to the change in momentum imparted by the impact.

“One of the major unanswered questions in the field of planetary defense is just what these near-Earth asteroids are actually made of, and so how they might react to kinetic impactors,” he said.

LLNL is providing impact modeling expertise to the DART mission using Spheral, a mesh-free code well suited for modeling impact, damage and fragmentation of materials undergoing strong shocks and extreme deformation. The Spheral code does this by using a variety of mesh-free discretizations of solid and fluid dynamics, including many important material properties such as strength, elastic-plastic flow, shock physics, damage evolution and fragmentation.

Mike Owen, developer of the Spheral code, said the mesh-free nature of Spheral allows researchers to naturally follow materials through large deformations and topological changes accurately, at the cost of increased complexity and higher computational expense compared with ordinary meshed discretizations of fluid-flow.

“For this reason, Spheral is also highly parallel, taking advantage of modern supercomputer clusters and allowing us to tackle large three-dimensional problems like the DART impact in reasonable times,” Owen said.

Looking back at LLNL’s role

Paul Miller, acting division leader for the Design Physics Division, began working on planetary defense programs at LLNL in 2011. He successfully proposed an LDRD Exploratory Research project to study planetary defense. He assembled a team, and over the course of three years led work that established a capability at LLNL to model the deflection and disruption of asteroids both by means of kinetic impactors and nuclear explosives.

“We also began to develop simulation capabilities for impact effects, particularly water impacts and the subsequent waves and coastal flooding that can occur,” Miller said. “We engaged with outside organizations, including NASA HQ, several of the NASA centers, other NNSA labs and university and international partners. At the end of the three-year LDRD project, we received approval from NNSA HQ to continue the work using programmatic funding.”

In 2015, Miller led a related project that was awarded an NNSA Award of Excellence (Planetary Defense Team NA-10 Project). In 2016, Miller contributed to the National Near-Earth Object Preparedness Strategy as a member of the Interagency Working Group for Detecting and Mitigating the Impact of Earth-bound Near-Earth Objects (or DAMIEN) of the National Science and Technology Council. Organized by NASA and the Office of Science and Technology Policy in the White House, the document lays out the official U.S. approach to address the hazard.

As a result of the capabilities that were established, LLNL became involved as participants in the DART mission and the working group focused on modeling the impact and deflection of the asteroid.