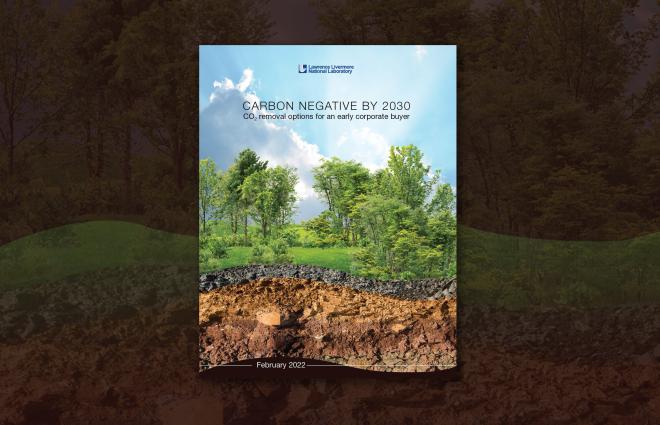 LLNL has provided input on Microsoft’s pathway to become carbon negative by 2030 in a new report released today.

LLNL researchers built on their pivotal report "Getting to Neutral: Options for Negative Carbon Emissions in California," which has become a trusted adviser in the discussion of how to remove carbon dioxide from the air, to make recommendations to Microsoft.

In the "Getting to Neutral" report, LLNL scientists identified a robust suite of technologies to help California clear the last hurdle and become carbon-neutral — and ultimately carbon-negative — by 2045. The Lab’s role in connecting industries, government agencies and interest groups has blossomed after the report, reflecting the group’s principle of including (and encouraging) all forms of carbon dioxide removal.

Now, LLNL has provided valuable input
to Microsoft as the company works to reach its carbon-negative goal by 2030, 15 years earlier than the goals set for California.

"'Getting to Neutral' was a catalyst for action," said Roger Aines, lead of the LLNL project and one of the authors. "As the only report to consider specific technologies at county-by-county sites, industry recognizes that we have the knowledge and balanced expertise to help them meet their goals."

Microsoft's goal of being carbon negative by 2030 involves reducing greenhouse gas emissions by over half and removing the rest, and then removing the equivalent of its historical emissions by 2050. To meet these commitments, it is estimated the company needs to remove between 5 and 6 million metric tons of atmospheric carbon dioxide per year by 2030 — and greater amounts thereafter.

"We assessed the most promising options for Microsoft to get to carbon-negative by 2030," said Briana Mordick Schmidt, LLNL researcher and lead author of "Carbon Negative by 2030: CO2 removal options for an early corporate buyer." "A key finding of our analysis is that we expect that the carbon-removal market in 2030 is very likely to be comprised of technologies that have already been piloted today, and perhaps some that will be piloted by 2025."

"Microsoft is committed to removing the carbon that we cannot reduce and to helping jumpstart the global carbon removal market," said Elizabeth Willmott, carbon program director at Microsoft. "The analysis provided by Lawrence Livermore scientists is valuable as we identify the most promising pathways for carbon removal in the coming decade."

Mordick Schmidt and her team examined five pathways for their potential to contribute to Microsoft’s carbon-removal goal: biomass-based carbon removal and storage (BiCRS and BECCS), soil carbon, forestry, direct air capture (DAC) and carbon mineralization. These five pathways are a combination of those currently removing CO2 and those that are most promising to provide removal at scale in the next decade.

Of the options assessed in this analysis, BiCRS has the greatest potential to provide durable removal at scale in the next decade, given the low net costs and estimated removal capacity. Soil carbon and forestry pathways face accounting and durability challenges but can provide important ecosystem, societal and other benefits. DAC and carbon mineralization are relatively immature and high-cost but have large capacity to scale; near-term investment in pilot projects is key to advancing these pathways. LLNL’s analysis found that the supply of carbon removal from these five project types has the potential to be larger than the needs of Microsoft as an individual buyer, but considerably less than the tens of gigatons needed to support net-zero emissions.

The report emphasizes that negative emissions cannot be a substitute for avoiding and reducing emissions to meet climate goals. Carbon-removal technologies play a critical complementary role to replacing polluting sources by:

All technologies considered for this report are those that can remove carbon dioxide from the atmosphere. These are distinct from, although may overlap with, technologies that replace polluting sources (e.g. replacing a natural gas-fired power plant with solar energy) or capture CO2 before it reaches the atmosphere (e.g. installing CO2-capture equipment on a natural gas-fired power plant).

The scope of the report is largely limited to interventions within the United States, given LLNL’s resources and expertise. However, some conclusions may be broadly applicable to carbon markets globally, and Microsoft’s carbon removal program is not limited to the U.S.

"Getting to Neutral: Options for Negative Carbon Emissions in California"
"Carbon Negative by 2030: CO2 removal options for an early corporate buyer"