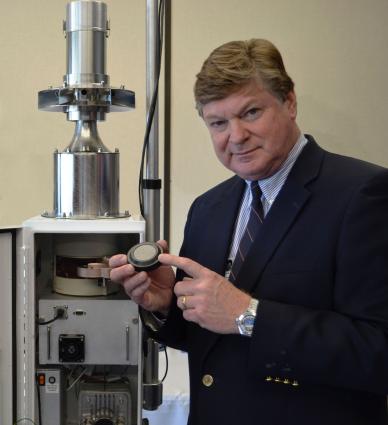 LLNL's Steve Homann, who is serving as the Department of Energy's senior science adviser for the NASA Mars Science Laboratory mission, holds a filter for an Environmental Continuous Air Monitor (shown in the background). 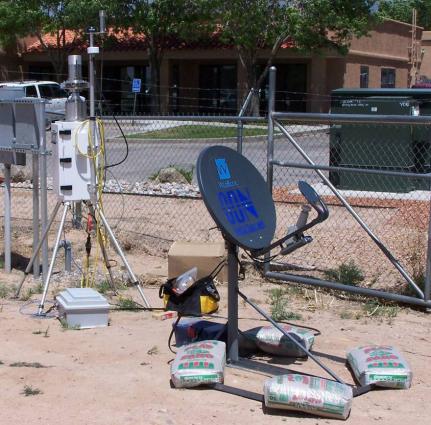 Shown at the left is an Environmental Continuous Air Monitor and at the right is a transmitter that sends data to a satellite that, in turn, relays the information to the Kennedy Space Center's Radiological Control Center and simultaneously to the National Atmospheric Release Advisory Center in Livermore.

When an Atlas V rocket lifts the Mars Science Laboratory into space, one of the most comprehensive radiological emergency preparedness systems will be on the ground to monitor the launch.

In preparation for the launch, now expected to occur this Saturday (Nov. 26), NASA has installed 30 radiological monitors -- called Environmental Continuous Air Monitors, or ECAMs -- on and around the Kennedy Space Center.

With coordination from Lawrence Livermore National Laboratory (LLNL), the ECAMs will monitor the air for the release of any radioactivity in the event of a launch accident involving the spacecraft.

Using weather, wind and other information, Livermore's NARAC team develops plume models for releases of radiological, chemical and biological materials to estimate potential downwind impacts. "The ability to turn around an accurate assessment of a radiological release, if there were an accident, with such extreme detail and speed, is unprecedented in the country's history of radiological emergency preparedness for rocket launches," said LLNL atmospheric scientist Ron Baskett.

Since the Galileo mission to Jupiter in 1989, NARAC has supported five NASA missions involving nuclear-powered spacecraft at the Kennedy Space Center. NARAC provides plume modeling expertise for radiological contingency planning, pre-launch and launch support and after action reporting. About the size of a small jeep, the Mars Science Laboratory will carry the largest and most technologically advanced rover -- dubbed "Curiosity" -- ever sent to another planet.

The rover will rely upon a radioisotope thermoelectric generator, essentially a nuclear battery, with 10.6 pounds of plutonium-238 dioxide that converts heat into electricity. The battery will give Curiosity its onboard power and warm its internal systems during the frigid Martian nights, where temperatures can dip as low as -238 degrees Fahrenheit.

Since 1961, radioisotope thermoelectric generators have been used successfully on 26 missions. Already operational, the 30 ECAM units draw in air and suspended particles that become trapped on filter paper and are analyzed by a radiation detector. The detector looks for the unique signature of plutonium-238.

The ECAM units, located from near Titusville, Fla. in the north to Melbourne in the south, are currently transmitting and will continue to send real-time data via satellite to the Kennedy Space Center's Radiological Control Center, and simultaneously to NARAC in Livermore.

"By being able to obtain such accurate data so rapidly, we would be able to confirm if a release had occurred and if so, produce updated and refined model estimates of radiological health effects based on real measurements," Homann said.

"In the unlikely event of a launch mishap, people will want to know whether there is a health and safety hazard with airborne plutonium," Homann said. "With the ECAMs units, we will be able to establish whether we see any radiation levels above the natural background radiation." In addition, 16 mobile field-monitoring teams will be deployed during the launch to provide more ground measurement data.

Among the space missions where Livermore's NARAC team has provided support are: the Galileo mission to Jupiter, 1989; the Ulysses mission to the sun, 1990; the Mars Pathfinder effort, 1996; the Cassini mission to Saturn, 1997; MER 1 and MER 2 mission to Mars, 2003; and the New Horizons mission to Pluto, 2006.

With a payload more than 10 times the size of previous Mars rovers, the goal of Curiosity is to study whether conditions are or have been favorable for microbial life and Mars' geologic record.

Outfitted with six wheels and a sophisticated suite of scientific equipment that includes a large robot arm, a laser, a weather station and a drill, the rover is expected to have a lifespan of one Mars year (687 Earth days) or more.

The rover is expected to visit regions of Mars that have not been previously explored and to analyze dozens of samples drilled from rocks or picked up from the ground.

The radioisotope thermoelectric generator is designed and built by the U.S. Department of Energy to contain its nuclear material in a variety of potential accident scenarios using several layers of protective materials.