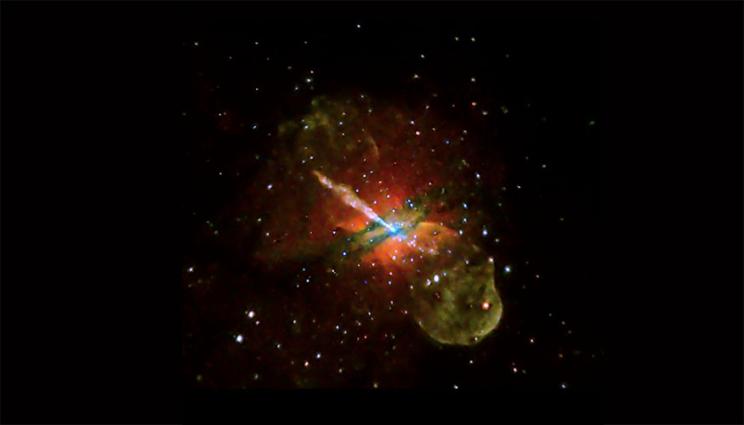 The Centaurus A galaxy, at a distance of about 12 million light years from Earth, contains a gargantuan jet blasting away from a central supermassive black hole. In this image, red, green and blue show low, medium and high-energy X-rays. Photo courtesy NASA/CXC/U. Birmingham/M. Burke et al.

By performing experiments using three laser systems — Titan at Lawrence Livermore, Omega-EP at the Laboratory for Laser Energetics (link is external) and Orion at Atomic Weapons Establishment (link is external) (AWE) in the United Kingdom — LLNL physicist Hui Chen and her colleagues created nearly a trillion positrons (also known as antimatter particles). In previous experiments at the Titan laser in 2008, Chen’s team had created billions of positrons.

Positrons, or "anti-electrons," are anti-particles with the same mass as an electron but with opposite charge. The generation of energetic electron-positron pairs is common in extreme astrophysical environments associated with the rapid collapse of stars and formation of black holes. These pairs eventually radiate their energy, producing extremely bright bursts of gamma rays. Gamma-ray bursts (GRBs) are the brightest electromagnetic events known to occur in the universe and can last from ten milliseconds to several minutes. The mechanism of how these GRBs are produced is still a mystery.

In the laboratory, jets of electron-positron pairs can be generated by shining intense laser light into a gold foil. The interaction produces high-energy radiation that will traverse the material and create electron-positron pairs as it interacts with the nucleus of the gold atoms. The ability to create a large number of positrons in a laboratory, by using energetic lasers, opens the door to several new avenues of antimatter research, including the understanding of the physics underlying extreme astrophysical phenomena such as black holes and gamma-ray bursts.

"The goal of our experiments was to understand how the flux of electron-positron pairs produced scales with laser energy," said Chen, who along with former Lawrence Fellow Frederico Fiuza (now at SLAC National Accelerator Laboratory), co-authored the article appearing in the May 26 edition of Physical Review Letters.

"We have identified the dominant physics associated with the scaling of positron yield with laser and target parameters, and we can now look at its implication for using it to study the physics relevant to gamma-ray bursts," Chen said. "The favorable scaling of electron-positron pairs with laser energy obtained in our experiments suggests that, at a laser intensity and pulse duration comparable to what is available, near-future 10-kilojoule-class lasers would provide 100 times higher antimatter yield."

The team used these scaling results obtained experimentally together with first-principles simulations to model the interaction of two electron positron pairs for future laser parameters. "Our simulations show that with upcoming laser systems, we can study how these energetic pairs of matter-antimatter convert their energy into radiation," Fiuza said. "Confirming these predictions in an experiment would be extremely exciting."

Antimatter research could reveal why more matter than antimatter survived the Big Bang at the start of the universe. There is considerable speculation as to why the observable universe is apparently almost entirely matter, whether other places are almost entirely antimatter, and what might be possible if antimatter could be harnessed. Normal matter and antimatter are thought to have been in balance in the very early universe, but due to an "asymmetry" the antimatter decayed or was annihilated, and today very little antimatter is seen.

In future work, the researchers plan to use the National Ignition Facility to conduct laser antimatter experiments to study the physics of relativistic pair shocks in gamma-ray bursts by creating even higher fluxes of electron-positron pairs.

The research was funded by LLNL’s Laboratory Directed Research and Development program and the LLNL Lawrence Fellowship.