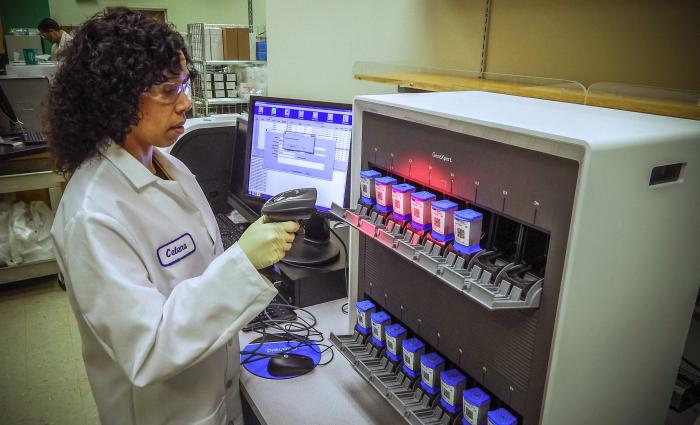 LLNL biomedical scientist Celena Carrillo conducts benchtop experiments in a collaboration between the Laboratory and three other institutions that assisted Sunnyvale-based Cepheid in advancing an Ebola virus detection test for emergency use. Photo by Julie Russell

Researchers from LLNL and three other institutions have assisted a Bay Area biomedical company in advancing its Ebola virus detection test for use.

Sunnyvale-based Cepheid has received an emergency use authorization from the U.S. Food and Drug Administration (FDA) to utilize its polymerase chain reaction (PCR)-based assay for diagnostic purposes.

"We received a Cepheid GeneXpert system, as well as their experimental Ebola assay cartridges, and tested them against non-Ebola bacterial and viral targets to show that the assay would only detect Ebola," said Reg Beer, LLNL’s medical diagnostics initiative program leader.

The Livermore testing, which was conducted under a work for others contract, was performed by Beer and biomedical scientists Pejman Naraghi-Arani and Celena Carrillo, who ran the benchtop experiments. No live virus material was used for these research studies. 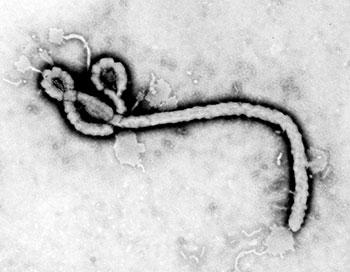 "This exclusivity testing supported Cepheid’s request to the FDA for an emergency use authorization (EUA) with the current Ebola outbreak. Our data was included in the FDA submission," Beer said.

In their work for Cepheid, the three Lab scientists tested about 25 target organisms, including inactivated RNA from multiple strains of Ebola virus and Marburg virus.

"The goal of the testing was to ensure that the assay would detect pathogenic Ebola and not cross react with non-target viruses. The work went superbly and it went very fast," said Naraghi-Arani.

In the view of Russell Higuchi, a distinguished fellow at Cepheid, LLNL’s work provided valuable assistance to the Bay Area company.

"LLNL really helped us with the development of this rapid, sensitive and easy-to-use Ebola assay," Higuchi said. "They helped establish that the test was specific only for Ebola and not for other pathogens or parasites that could mimic Ebola symptoms. They also were one of the first sites outside of Cepheid to use the assay and as such, provided great feedback as to usability and on user interface issues."

One of the reasons that Cepheid wanted to work with LLNL, according to Beer, is because of the Laboratory’s expertise in multiplex PCR assay development.

"We have a history of working with Cepheid and we have ongoing relationships with some of their researchers," Beer added.

It is anticipated that the Lab’s collaboration with Cepheid will continue as LLNL researchers are now going to provide the firm with an accurate quantification of viral RNA samples that would be used for testing.

In addition to LLNL, the three other institutions that worked on advancing the firm’s Ebola virus detection test were the University of Texas Medical Branch at Galveston, which has a Biosafety Level-4 lab, Health Canada and the Swedish Centers for Disease Control.

Within the past few days, on May 13, Cepheid announced that the World Health Organization had listed Cepheid’s Ebola test, which can deliver results in less than two hours, as eligible for procurement to Ebola-affected nations.

Cepheid is a molecular diagnostics company that works to improve health care by developing, manufacturing and marketing accurate yet easy-to-use molecular systems and tests.

In 1996, Cepheid was co-founded by M. Allen Northrup, a former LLNL researcher, to turn rapid PCR into commercial products. The firm shipped its first product, the SmartCycler, in 1999.