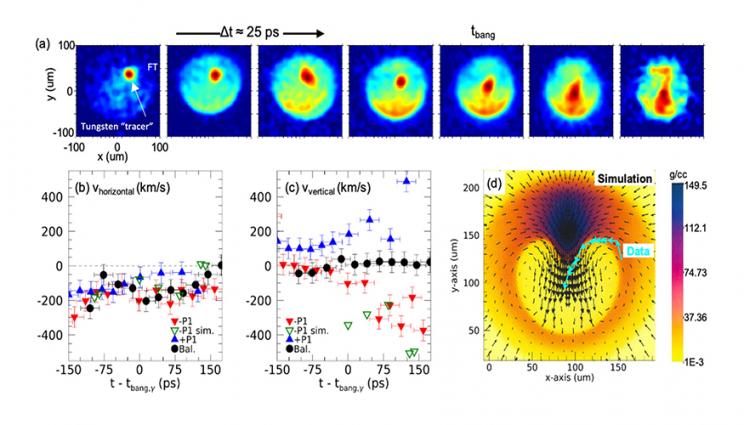 Imagine having a balloon between both hands and trying to squeeze it with the same force on all sides so that it uniformly shrinks down. However, if you push on one side harder than the other the balloon won’t compress uniformly and will, in fact, move away from the hand that is pushing harder.

The same thing happens when the drive pushing on an inertial confinement fusion (ICF) capsule is imbalanced — if it pushes harder on the top than on the bottom the capsule will move downward. This motion detracts from the energy heating the capsule and generating fusion. A short leap is to imagine two pistons compressing this gas instead of hands.

That is how Dave Schlossberg, Lawrence Livermore National Laboratory (LLNL) staff scientist, explains the effect of laser drive asymmetry. Schlossberg is the lead author in a recently published paper in in Physical Review Letters.

The team conducted experiments at the National Ignition Facility to investigate a “low-mode” laser asymmetry that was significantly degrading performance. The results from the work led to a detailed understanding of this degradation from the very small-scale up to the largest scale.

“With this knowledge it’s possible to reduce asymmetries and increase performance — which was recently accomplished,” he said, adding that this is one in a series of experiments over the last several years remediating degradations from radiative losses, engineering features and ablator asymmetries.

There are four key findings from this work that include: measured signatures of asymmetric laser drive; agreement between simulation and experiment; quantification of Doppler-broadening in apparent ion temperature with increased bulk plasma motion; and relating observed, driven hot spot flows to macroscopic input parameters.

“In experimental science we only know what we can measure — so first we needed to characterize the measurements that show these implosions suffered from laser drive asymmetry,” he explained. “The natural next step was to compare these measurements with models and see if they agreed, and they did.”

One product of deuterium-tritium fusion is a neutron traveling 51,234 km/s in the center-of-mass frame — that’s ~17 percent the speed of light. If the plasma producing these neutrons also is moving with some velocity, then that velocity is added to the neutron. The team showed that small variances in this neutron velocity directly related to broadening of the measured, time-of-flight neutron spectrum.

“Think of it as measuring the arrival time of a bullet fired from a gun, where a bullet represents a neutron,” he proposed. “If you’re a precision sharpshooter standing absolutely still every time you fire a bullet, it will arrive at the target at exactly the same time. But, now say you’re running and firing, then some bullets arrive sooner and some later depending how fast you’re moving each time you fire the gun.”

Schlossberg said the same thing is true in the imploding, fusing plasma that’s producing neutrons while it’s moving. The neutron time-of-flight diagnostic precisely measures neutron arrival times and relates them to the plasma’s internal energy. If there’s additional spread in the arrival times because the plasma is moving, that’s an important consideration when inferring the plasma thermal temperature. This work characterized how the apparent ion temperature increases due to variance in the deuterium-tritium velocities.

The final finding of this work is direct measurement of the flowing deuterium-tritium ions within the fusing hot spot.

“Here we got a bit lucky, since some of the tungsten used to dope the capsule was injected into the hot plasma and lit up brightly in the X-ray range,” Schlossberg acknowledged.

It served as a tracer particle for these internal flows. By tracking the motion of this tracer particle over time, the team mapped out a flow line while the plasma was fusing. This is important since these flows are the cause of the increased apparent temperature, and it showed consistency between both measurements.

The team used this measurement to connect flows within the microscopic hot spot to asymmetries in the macroscopic laser-drive. When they balanced the laser drive these flows disappeared (see Bal. trace ● in figure). These findings combine to provide a comprehensive understanding of the effects of laser drive asymmetry on implosion performance, and shows agreement across experiment, simulation and theory. This provides confidence for future work to identify and reduce these asymmetries in laser drive, leading to overall improved performance.

“When we saw preliminary time-resolved, X-ray imaging soon after the first shot we were immediately intrigued — something spectacular was showing up, which ended up being the time-resolved motion of the tracer particle traveling through the hot spot,” Schlossberg said. “This material was traveling ~0.1 percent the speed of light through material ~10 times denser than solid material."

“It’s truly a team effort, and I’m thrilled and humbled to be part of such a great group of people,” Schlossberg expressed, adding that work was done by a team of NIF scientists and engineers spanning across groups that handle data analysis, target fabrication, operations and diagnostics.