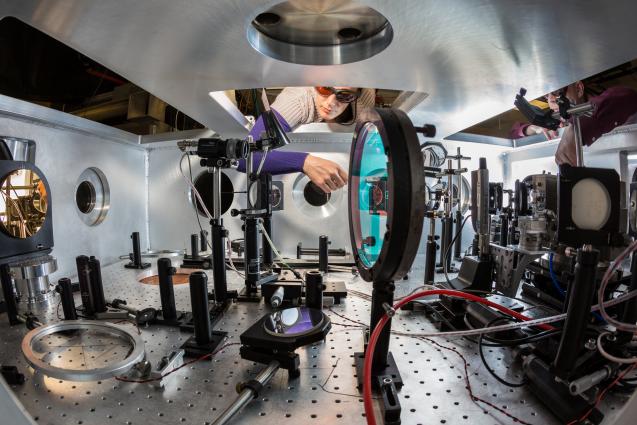 Breanna Bishop, bishop33 [at] llnl.gov, 925-423-9802
A Lawrence Livermore team, along with researchers from the University of California at Los Angeles and SLAC National Accelerator Laboratory, has recently produced some of the highest energy betatron X-rays ever demonstrated, with the added benefit of being produced on a system the size of a large tabletop.

Betatron X-ray radiation, produced when relativistic electrons are accelerated and oscillate in a laser-driven plasma channel (during a process known as laser-wakefield acceleration), is an X-ray source holding great promise for future high energy density (HED) science experiments. X-rays produced in this manner are femtosecond in duration, directional, spatially coherent and broadband, making them highly attractive as a probe.

"This source could someday be an alternative to X-ray synchrotrons and free electron lasers. These machines are expensive, complex, and kilometers in length," said lead author Felicie Albert. "As a result, few of these exist worldwide, and their size prevents their use as mobile systems or as diagnostic tools in conjunction with other large-scale HED drivers, such as the National Ignition Facility."

The experiments were performed at LLNL's Jupiter Laser Facility, using the 200-Terawatt Callisto laser system. By focusing Callisto's 60 femtosecond laser pulse onto a gas cell filled with helium, the researchers produced up to 80 kiloelectronvolts of betatron X-rays and measured for the first time the angular dependence of betatron X-ray spectra in a laser-wakefield accelerator.

"We hope to use this remarkable X-ray tool to explore the properties of high energy density plasmas at femtosecond resolution and at the atomic level, which are poorly understood at present," Albert said. "Many applications beckon on the horizon, as these X-rays could be used in any research involving X-ray synchrotron or free electron laser radiation. It could be used to discover new physical properties of materials at the high pressures and temperatures found only in planet interiors and fusion plasmas."

Albert was joined by LLNL's Bradley Pollock, Joseph Ralph, Yu-Hsin Chen, David Alessi and Arthur Pak and collaborators from the UCLA Department of Electrical Engineering and the SLAC National Accelerator Laboratory. This work, supported by the LLNL Laboratory Directed Research and Development program, was reported in the Dec. 6 issue of Physical Review Letters.