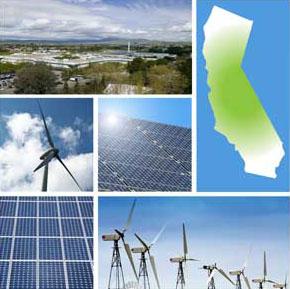 Lawrence Livermore National Laboratory (LLNL) is working with the California Energy Commission to develop ways to increase the amounts of wind and solar generation integrated into California's energy grid.

The project will use LLNL's high-resolution weather models and high performance computing to characterize intermittent renewable resources, including wind and solar power. LLNL received $1.75 million from the California Energy Commission to conduct research.

California has mandated that 33 percent of energy generated in the state must come from renewables by 2020. As more renewable energy resources are added to the grid, the ability to accommodate them becomes more challenging. The difficulty of forecasting when and how much wind and solar energy will be produced remains a principal barrier to the integration of larger amounts of renewable energy into the state's power system. Improving the ability of the grid to accommodate these fluctuations in power supply has the potential to reduce electric power rates and dependence on the use of fossil fuels for energy.

Strategies for providing "spinning reserve" and "ancillary services" will be analyzed using models of the Western Electricity Coordinating Council available from the California Independent System Operator. The "spinning reserve" is the added generating capacity available by increasing the power output from the generators connected to the power grid. "Ancillary services" are those necessary to support the transmission of electric power from producer to consumer through the complex of control areas and utilities that comprise the energy grid.

Livermore has a long history in energy-related projects. For example, LLNL has the tools and expertise to better predict wind patterns, including microclimates horizontally across land mass and vertically above the Earth's surface, so that wind plant developers and operators have a better idea of where and how to build the most efficient wind farms. LLNL also has decades of experience in applying supercomputers to the solution of complex scientific and engineering problems.

The new studies will help California leverage advanced modeling and simulation capabilities as well as data from smart meter and advanced grid measurement instruments called "phasor measurement units" to address the challenges of reducing emissions while limiting the economic burden on ratepayers.

Under the project, LLNL scientists also will analyze policies and methods to coordinate intermittent generation with the charging of plug-in electric vehicles. Researchers also will evaluate the effects on system stability from increased capacity of renewable generation with solid state inverters.

Evaluation of automated demand response and storage technologies with a range of power ratings and discharge times also will be a key area of study. Finally, the effort will evaluate system stability impacts associated with the increasing capacity of renewable generation equipped with solid state inverters.