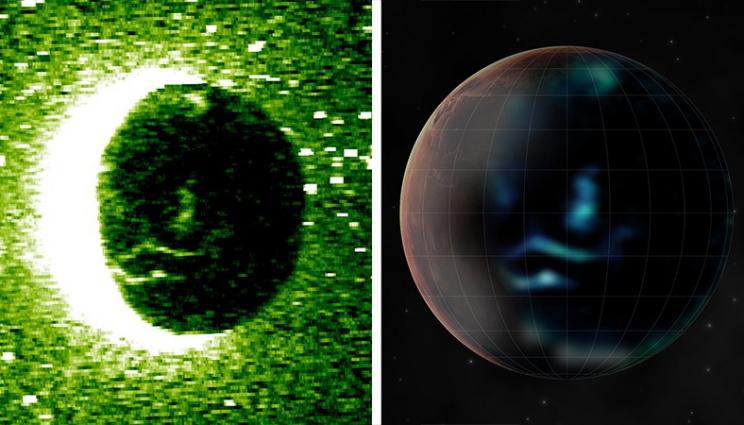 The United Arab Emirates' (UAE) Mars mission that launched about a year ago has recently captured the most detailed images of auroras in the Martian sky.

The optics used to capture these images include a silicon carbide-coated mirror and diffraction grating for the Emirates Mars Ultraviolet Spectrometer (EMUS) that were developed by researchers at Lawrence Livermore National Laboratory (LLNL) and collaborators at the Laboratory for Atmospheric and Space Physics (LASP) at the University of Colorado.

The Hope Probe is designed to study Mars’ atmosphere across all its layers and at a global scale throughout the different seasons over the course of a Martian year. But the new finding is outside that main science plan and occurred even before the probe's formal science mission had begun, when scientists were testing the instruments on the spacecraft. In images from EMUS, scientists easily spotted the highly localized nightside aurora that scientists have struggled to study at Mars for decades.

“Typical planetary ultraviolet spectrometers are unable to measure emissions located at wavelengths shorter than about 115 nanometers,” said Greg Holsclaw, EMUS instrument scientist. “LLNL’s silicon carbide coating, applied to half the optic area and used in combination with a windowless, photon-counting detector, allows EMUS to access an emission at 102.6 nm that is produced by the extended hydrogen exosphere of Mars. This brings new and complementary information to the hydrogen emission at 121.6 nm that is more commonly observed.”

The optics are part of the far-ultraviolet imaging spectrograph that aims to study the Martian atmosphere in the 100-170 nanometer spectral range. The Hope Probe is the first Mars orbiter to carry a spectrometer that is sensitive to wavelengths below 121 nanometers. EMUS will be used to investigate how conditions throughout the Mars atmosphere affect rates of atmospheric escape, and how key constituents in the exosphere behave temporally and spatially.

Scientists know that Earth's auroras are tied to the planet's global magnetic field and are triggered by charged particles from the sun. But the situation is a little different at Mars, where scientists have observed three types of auroras.

One type of Martian aurora occurs exclusively on the daylit side of the planet; the other two occur on the nightside. One of the nighttime phenomena occurs only during extremely strong solar storms and lights up the whole disk. But the discrete aurora, the kind that scientists observed with Hope, isn't limited to periods of heavy solar activity, instead occurring only in certain patches of the nightside of Mars.

Scientists have made more progress on understanding the strange magnetic field characteristics of the Red Planet because that phenomenon is tied to the Martian crust, which scientists can more easily study. On the planet's surface, scientists have found patches of rocks that contain the magnetic signature of a global magnetic field that Mars has since lost.

The specially prepared silicon carbide coating that was deposited on the EMUS optics was originally developed by the LLNL team for the Linac Coherent Light Source mirrors at SLAC National Accelerator Laboratory. Soufli said, “Our team was excited to work on our first optics for a Martian mission," having earlier developed extreme ultraviolet multilayer optics for solar imaging for NASA’s Solar Dynamics Observatory and the National Oceanic and Atmospheric Administration’s Geostationary Operational Environmental Satellites that are used for space weather forecasting, severe storm tracking and meteorology research.

The Livermore team includes Soufli, Jeff Robinson, Tom Pardini and Jay Ayers, with Eric Gullikson from Lawrence Berkeley National Laboratory. The work was funded by the University of Colorado.