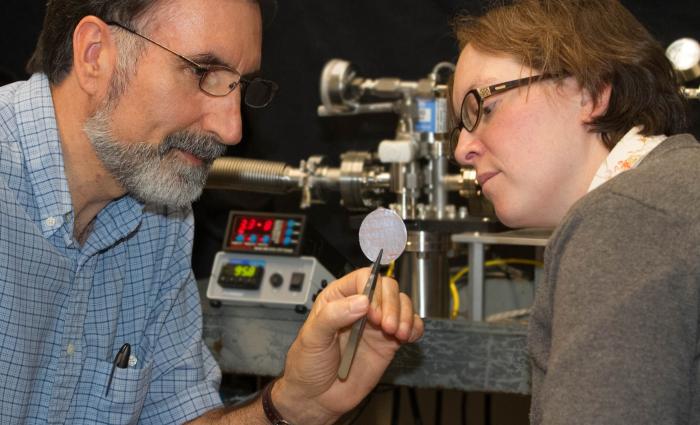 Lab researchers Steve Falabella and Jennifer Ellsworth inspect a titanium foil infused with deuterium. The chamber used for the process appears in the background. The chamber is designed for ultra-high vacuum, to be heated up to 500°C, and to be backfilled with a controlled pressure of deuterium. Photo by Julie Russell/LLNL

A team of Lawrence Livermore National Laboratory (LLNL) scientists has begun collaborating with a New York company to improve its manufacturing process and increase the power source storage capacity of the firm’s portable sensors.

Lab researchers are working with Ithaca, New York-based Widetronix under a $250,000 project financed by the Small Business Voucher (SBV) Pilot, a program launched last year by the U.S. Department of Energy.

"We’re hoping to assist the company in improving their manufacturing process, particularly in the work to produce power sources for their portable sensors," said Robin Miles, the Lab’s program manager for the SBV pilot.

Widetronix manufactures ultra-low-power sensors that use betavoltaics, micro-power sources fueled by tritium and nickel-63 isotopes. The company is working with customers in the defense, space and medical implant sectors.

"The firm is specifically interested in our ability to integrate tritium into their proprietary textured semiconductor chips." Miles said. "In doing so, we will be optimizing process conditions and developing new analytical techniques that greatly improve the power output of Widetronix’s betavoltaics. Ultimately, this will lead to new sensors and therapeutic medical implants that save lives, which makes this work particularly rewarding for the LLNL team."

One unique skill that Lab researchers working on this one-year cooperative research and development agreement bring to the table is the Lab’s capability in deposition techniques for thin metal films into radioisotopes. The technology was developed through work on thin-film neutron targets that Lab engineers performed for a compact neutron source.

"Small businesses are critical to the delivery of new clean energy technologies and the national laboratories are a key source of the ideas and innovation that will develop these next-generation technologies," said Rich Rankin, the director of LLNL’s Industrial Partnerships Office.

"By creating an environment that brings national labs and small business together, the Small Business Voucher program plays a critical role that will help  provide the clean energy supply that this country needs in the future," Rankin said.

With up to $20 million in funding, the SBV pilot aims to provide about 100 small businesses with access to national laboratory facilities and resources through vouchers valued between $50,000 and $300,000 per company, according to the SBV website.

"One of the major goals of this program for LLNL is to foster relationships between the Lab and industry in the clean energy sector, as well as promoting job creation," said Miles, who also is the deputy leader for the Laser Systems Engineering and Operations Division within Engineering.

Several companies partnered with LLNL are seeking to collaborate under a second round of SBV pilot program funding applications that closed April 10. It is anticipated that the second round recipients will be announced in July.  An application period for a third round of SBV funding is expected to start in the fall.

Widetronix is an early stage venture spun out of Cornell University. The company has expertise in semiconductor design and fabrication, as well as ultra-low-power electronics. It was originally founded by Cornell’s Michael Spencer.