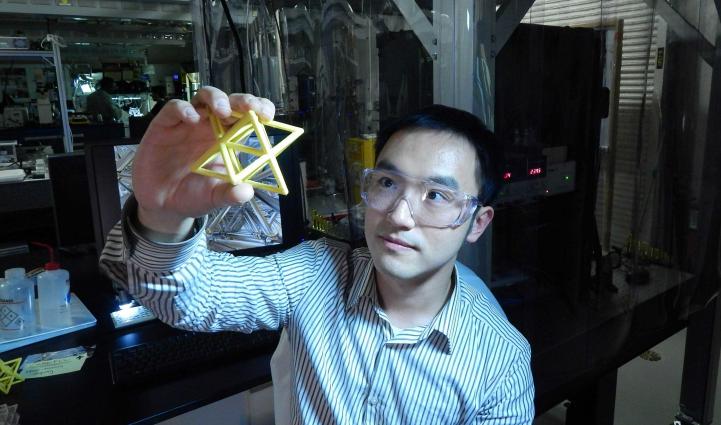 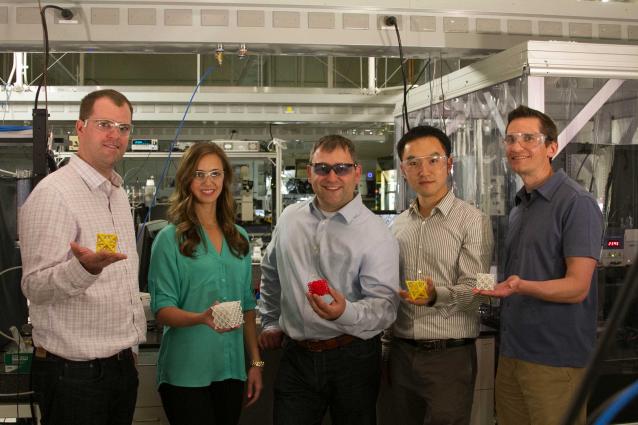 LIVERMORE, Calif. - Imagine a material with the same weight and density as aerogel -- a material so light it's called 'frozen smoke' -- but with 10,000 times more stiffness. This material could have a profound impact on the aerospace and automotive industries as well as other applications where lightweight, high-stiffness and high-strength materials are needed.

Lawrence Livermore National Laboratory (LLNL) and Massachusetts Institute of Technology (MIT) researchers have developed a material with these properties using additive micro-manufacturing processes. The research team's findings are published in a June 20 article in the journal Science.

Titled "Ultralight, Ultrastiff Mechanical Metamaterials," the article describes the team's development of micro-architected metamaterials -- artificial materials with properties not found in nature -- that maintain a nearly constant stiffness per unit mass density, even at ultralow density. Materials with these properties could someday be used to develop parts and components for aircraft, automobiles and space vehicles.

Most lightweight cellular materials have mechanical properties that degrade substantially with reduced density because their structural elements are more likely to bend under applied load. The team's metamaterials, however, exhibit ultrastiff properties across more than three orders of magnitude in density.

"These lightweight materials can withstand a load of at least 160,000 times their own weight," said LLNL Engineer Xiaoyu "Rayne" Zheng, lead author of the Science article."The key to this ultrahigh stiffness is that all the micro-structural elements in this material are designed to be over constrained and do not bend under applied load."

The observed high stiffness is shown to be true with multiple constituent materials such as polymers, metals and ceramics, according to the research team's findings.

"Our micro-architected materials have properties that are governed by their geometric layout at the microscale, as opposed to chemical composition," said LLNL Engineer Chris Spadaccini, corresponding author of the article, who led the joint research team. "We fabricated these materials with projection micro-stereolithograph y."

This additive micro-manufacturing process involves using a micro-mirror display chip to create high-fidelity 3D parts one layer at a time from photosensitive feedstock materials. It allows the team to rapidly generate materials with complex 3D micro-scale geometries that are otherwise challenging or in some cases, impossible to fabricate.

"Now we can print a stiff and resilient material using a desktop machine," said MIT professor and key collaborator Nicholas Fang. "This allows us to rapidly make many sample pieces and see how they behave mechanically."

The team was able to build microlattices out of polymers, metals and ceramics.

For example, they used polymer as a template to fabricate the microlattices, which were then coated with a thin-film of metal ranging from 200 to 500 nanometers thick. The polymer core was then thermally removed, leaving a hollow-tube metal strut, resulting in ultralight weight metal lattice materials.

"We have fabricated an extreme, lightweight material by making these thin-film hollow tubes," said Spadaccini, who also leads LLNL's Center for Engineered Materials, Manufacturing and Optimization. "But it was all enabled by the original polymer template structure."

The team repeated the process with polymer mircolattices, but instead of coating it with metal, ceramic was used to produce a thin-film coating about 50 nanometers thick. The density of this ceramic micro-architected material is similar to aerogel.

"It's among the lightest materials in the world," Spadaccini said. "However, because of its micro-architected layout, it performs with four orders of magnitude higher stiffness than aerogel at a comparable density."

Lastly, the team produced a third ultrastiff micro-architected material using a slightly different process. They loaded a polymer with ceramic nanoparticles to build a polymer-ceramic hybrid microlattice. The polymer was removed thermally, allowing the ceramic particles to densify into a solid. The new solid ceramic material also showed similar strength and stiffness properties.