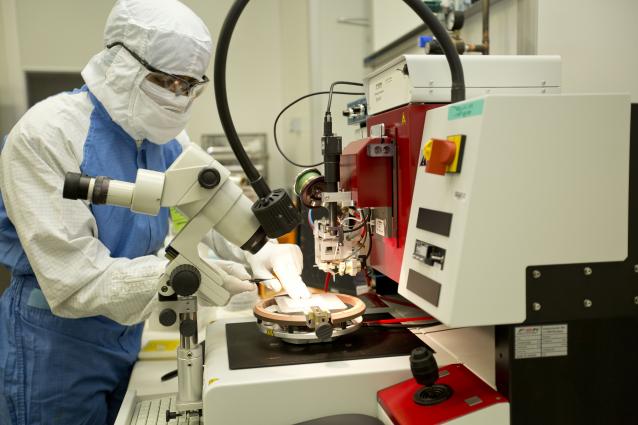 Lawrence Livermore National Laboratory engineer Kedar Shah works on a neural device at the Lab's Center for Micro- and Nanotechnology. 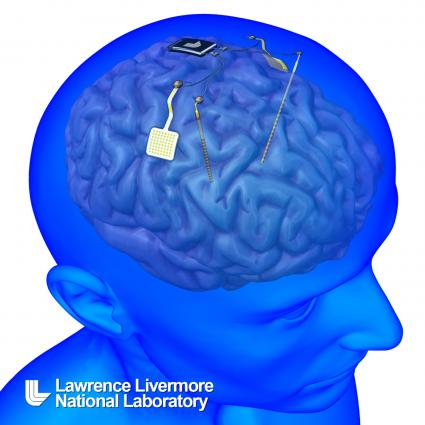 This rendering shows the next generation neural device capable of recording and stimulating the human central nervous system being developed at Lawrence Livermore National Laboratory. The implantable neural interface will record from and stimulate neurons within the brain for treating neuropsychiatric disorders.

Several years ago, researchers at Lawrence Livermore in conjunction with Second Sight Medical Products developed the world's first neural interface (an artificial retina) that was successfully implanted into blind patients to help partially restore their vision. The new neural device is based on similar technology used to create the artificial retina.

"DARPA is an organization that advances technology by leaps and bounds," said LLNL's project leader Satinderpall Pannu, director of the Lab's Center for Micro- and Nanotechnology and Center for Bioengineering, a facility dedicated to fabricating biocompatible neural interfaces. "This DARPA program will allow us to develop a revolutionary device to help patients suffering from neuropsychiatric disorders and other neural conditions."

LLNL and Medtronic are collaborating with UCSF, UC Berkeley, Cornell University, New York University, PositScience Inc. and Cortera Neurotechnologies on the DARPA SUBNETS project. Some collaborators will be developing the electronic components of the device, while others will be validating and characterizing it.

As part of its collaboration with LLNL, Medtronic will consult on the development of new technologies and provide its investigational Activa PC+S deep brain stimulation (DBS) system, which is the first to enable the sensing and recording of brain signals while simultaneously providing targeted DBS. This system has recently been made available to leading researchers for early-stage research and could lead to a better understanding of how various devastating neurological conditions develop and progress. The knowledge gained as part of this collaboration could lead to the next generation of advanced systems for treating neural disease.

The LLNL Neural Technology group will develop an implantable neural device with hundreds of electrodes by leveraging their thin-film neural interface technology, a more than tenfold increase over current Deep Brain Stimulation (DBS) devices. The electrodes will be integrated with electronics using advanced LLNL integration and 3D packaging technologies. The goal is to seal the electronic components in miniaturized, self-contained, wireless neural hardware. The microelectrodes that are the heart of this device are embedded in a biocompatible, flexible polymer.

Surgically implanted into the brain, the neural device is designed to help researchers understand the underlying dynamics of neuropsychiatric disorders and re-train neural networks to unlearn these disorders and restore proper function. This will enable the device to be eventually removed from the patient instead of being dependent on it.

Using the Center for Micro- and Nanotechnology's unique capabilities, Pannu and his team of engineers have achieved 25 patents and many publications during the last decade. The team's goal with the DARPA SUBNETS program is to build a prototype neural device in four years for clinical trials at UCSF.

"We are very excited about this project," Pannu said. "This is a great opportunity to develop therapies that have the potential to advance health care for our service members, veterans and the general public."