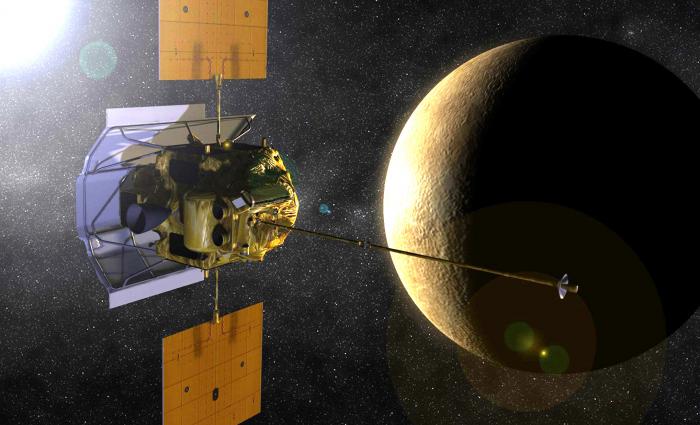 An artist's concept of the MESSENGER spacecraft in orbit around planet Mercury. Credit: NASA

A versatile instrument developed by Lawrence Livermore National Laboratory (LLNL) scientists and riding on the first spacecraft to ever orbit Mercury is causing researchers to rethink their theories on the planet’s formation.

Known as the Gamma-Ray Spectrometer, or GRS, the instrument is part of a suite of seven instruments onboard NASA’s Mercury MESSENGER (short for MErcury Surface, Space ENvironment, GEochemistry and Ranging) spacecraft.

The GRS is the result of a collaboration between Livermore and The Johns Hopkins University Applied Physics Laboratory (JHUAPL). At the heart of the GRS is a high-purity germanium sensor system developed by LLNL scientists.

Instruments onboard MESSENGER started operating in mid-March 2011 as the spacecraft started the first of its more than 4,000 orbits around Mercury. It is expected that MESSENGER’s orbit will decay over the next month until it finally ends its journey and falls onto the surface of Mercury.

"One of the biggest contributions of the GRS has been to help scientists understand how Mercury was formed," said LLNL physicist Morgan Burks.

"The measurement of the planet’s elemental composition is helping them refine their theories on Mercury’s formation." 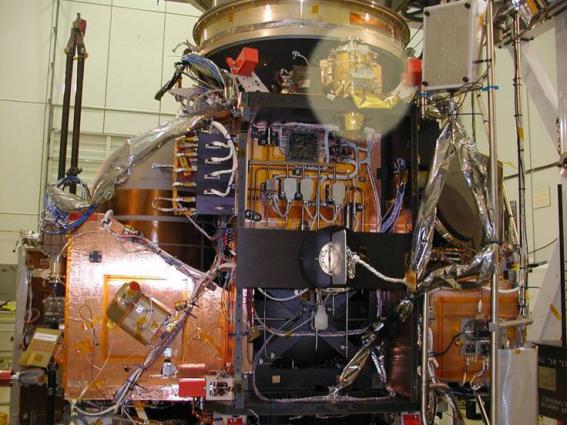 One key finding revealed by data from the GRS has been the discovery of higher-than-expected levels of potassium, sodium and chlorine across Mercury’s surface.

Before the data from MESSENGER, scientists envisioned a number of formation mechanisms for Mercury that involved high-temperature processes to account for the planet’s unusually large iron core.

Because such processes would have removed elements such as potassium, sodium and chlorine from the planet, the GRS observations have forced scientists to reconsider Mercury’s origins.

"The GRS has exceeded expectations," said Patrick Peplowski, instrument scientist for the GRS with JHUAPL and an analyst for the MESSENGER data.

"To do that with the first mechanically cooled high-purity germanium detector for planetary science, orbiting the closest planet to the sun after a six-and-a-half year journey through interplanetary space, is a testament to all of the hard work done at LLNL and JHUAPL. Livermore did an amazing job. The GRS results have had and continue to have a profound impact on our understanding of our solar system," Peplowski added.

To date, about 10 scientific articles based mainly on GRS data have been published and have generated almost 200 citations in the scientific literature.

During its one year of operation, the GRS measured gamma rays from Mercury that were emitted from the planet’s surface.

Since Mercury is not protected by an atmosphere, it is bombarded by cosmic rays that interact with the planetary surface, resulting in gamma-ray emissions from normally stable elements.

To achieve its goal, the team developed a thermal and mechanical cooling design that allows the germanium crystal to operate at -200 degrees Celsius while rejecting 98 percent of the infrared heat and energy from the broiling surroundings.

"After six-and-a-half years of space travel, once the MESSENGER spacecraft finally reached Mercury’s orbit, the GRS team was just about on the edge of their seats," Burks said.  "Even though the instrument had been tested extensively on the ground and in flight, it was quite exciting when the instrument was turned on and we waited for the first results."

Just as the Mercury MESSENGER mission is ending, LLNL and JHUAPL have received a three-year, $3 million grant from NASA to develop and space qualify a new high-purity germanium detector known as "GeMini Plus."

So far, the Lab has produced three generations of high-purity, germanium-based gamma-ray spectrometers – the Cryo-3, the Mercury MESSENGER GRS and the GeMini. The latter instrument will be commercialized by Tennessee-based ORTEC, a subsidiary of AMETEK.

The new "GeMini Plus," which is set to be built by LLNL and JHUAPL over the next three years, will be smaller, lighter weight and use less power than the MESSENGER GRS. It is expected to weigh 2.5 kilograms (about 5 pounds, 8 ounces) and use 5.5 watts of power.

"However, many of these missions will be resource limited and current gamma-ray instruments have relatively large mass and power requirements that will limit their use to missions with large available resources. ‘GeMini Plus’ is a new type of gamma-ray spectrometer that brings the power of high-resolution germanium to missions with low resources."

Under the NASA grant, LLNL scientists will focus on developing the new ‘GeMini Plus,’ while researchers from JHUAPL will work on the instrument’s electronics and test it for radiation damage.