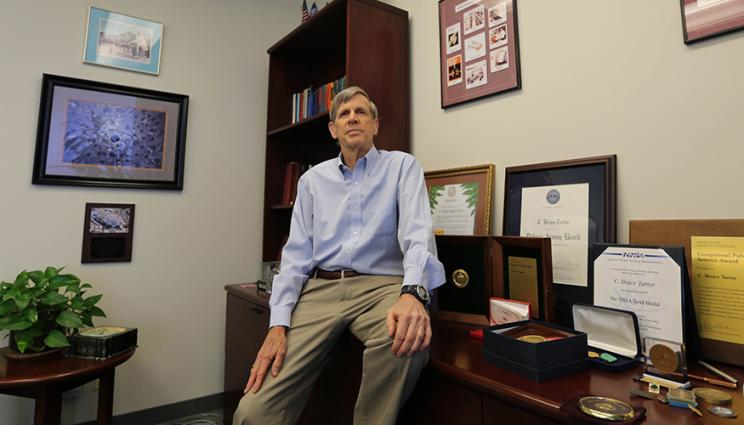 Former Lawrence Livermore Director Bruce Tarter will discuss the history of the Laboratory and the making of his book, “The American Lab,” at the Livermore library, at 2 p.m. Friday, Nov. 16. Photo by Julie Russell/LLNL

Bruce Tarter, director emeritus at Lawrence Livermore National Laboratory, will discuss the history of the Laboratory and the making of his book, "The American Lab," at the Livermore Public Library, at 2 p.m. Friday, Nov. 16.

The program will be held in the Community Rooms at the Civic Center Library, 1188 S. Livermore Ave., Livermore. Admission is free.

"The American Lab" is the first comprehensive history of Lawrence Livermore National Laboratory. The book divides the Laboratory into three eras — starting with the dawn of the Cold War, the founding of the Lab and its struggle to break out of the shadows of Los Alamos and Lawrence Berkeley labs; onto the tenure of its sixth director, Roger Batzel, and the Lab’s evolution into laser science, energy, environment and biology; and concluding with the end of the Cold War, the beginning and end of Star Wars, Tarter’s own turn as the Lab’s eighth director, the establishment of the Stockpile Stewardship Program and the Lab’s transition to a new contract manager.

Tarter began working on the book during planning for the Lab’s 50th anniversary back in 2002. Whether it was his days as an intern in 1962, his fulltime employment as a theoretical physicist five years later, his rise up the management chain to his tenure as the eighth director, his years of counsel as director emeritus or now, as author, Tarter has been passionate about how the Lab will be remembered.

Throughout his career Tarter crossed paths with most of the people who were instrumental to the Lab and its history. He believes LLNL stands as "the quintessential American Laboratory," hence his book’s title. Though often equated to the vision of Edward Teller, one of the Lab’s co-founders, the Lab’s philosophy and approach are linked directly to namesake E.O. Lawrence, who embraced multidisciplinary teams, evolving technology and audacious ideas. "It is a place few outsiders came to love, though many respected its level of achievement," Tarter said. That respect for the Lab is the takeaway Tarter wants his readers to achieve.

This program is part of the library’s Authors and Arts Series, supported by the Friends of the Livermore Library.