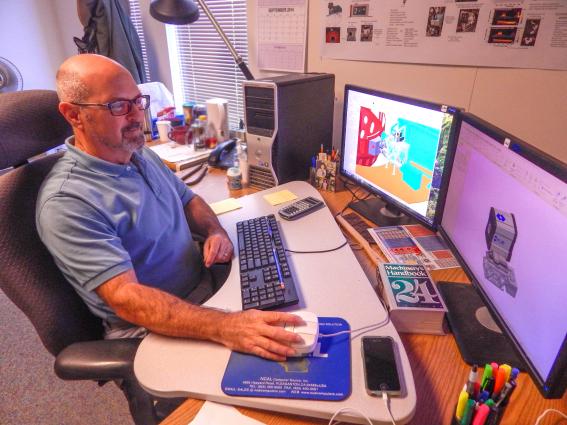 Lawrence Livermore National Laboratory designer Kevin Morris was part of a research team that developed an infrared camera system to view General Atomic's DIII-D Tokamak from the inside. Photo by Julie Russell/LLNL

LIVERMORE, Calif. – General Atomics’ DIII-D Tokamak has been a critical part of the nation’s magnetic fusion energy research since it was built in the 1980s.

Over the years, wear and tear has taken its toll. However, it was impossible for researchers to see inside the San Diego company’s highly complicated machine to assess damage -- until now.

Lawrence Livermore National Laboratory researchers, in collaboration with General Atomics and the University of Arizona, have developed an infrared and visible camera viewing system that’s able to produce wide-angle, tangential views of full poloidal (north-south direction of the magnetic field) cross-sections inside the tokamak. The camera’s images provide researchers with data about the interior conditions of the DIII-D, which was built under contract for the Department of Energy. DOE provides funding for its operation.

"We wanted to look inside the tokamak’s chamber to see where things were heating up on the walls," said Kevin Morris, a designer with LLNL’s National Security Engineer Division, who was part of the research team that developed the camera system. "There are a lot of critical areas that are heated by the plasma, and researchers want to understand them better." 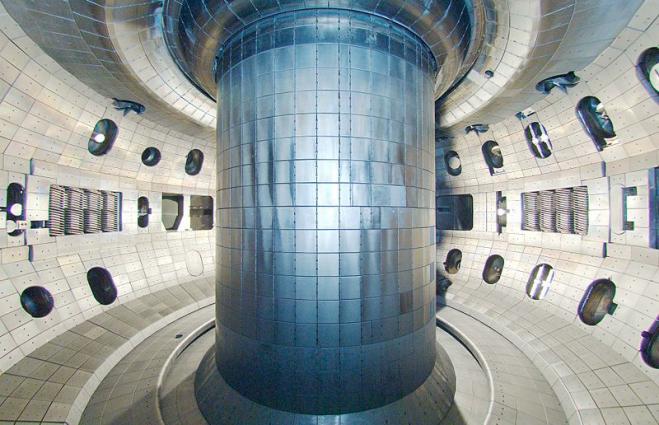 Tokamaks are devices that use a magnetic field to confine plasma in the shape of a torus, which looks like doughnut. The plasma is produced by heating a mixture of deuterium and tritium – two isotopes of hydrogen – to temperatures greater than 150 million degrees Celsius. In order to keep the hot electrically charged plasma particles away from the machine’s walls, strong magnetic field lines cause them to move around the torus in a helical shape.

"The plasma can be unstable," Morris said. "This can result in heating of the wall in new places."

The camera system consists of a commercially available infrared camera, a fast visible camera and an optical system designed by a collaboration of physicists, engineers, optical designers and mechanical designers.

Their design will be used as a prototype for a set of larger cameras that will be built for the International Thermonuclear Experimental Reactor project. The international nuclear fusion megaproject seeks to build the world’s largest experimental tokamak in France.

DIII-D’s camera system, which looks like a periscope, has three polished stainless steel mirrors in a vacuum that view the tokamak through an aperture in the first mirror. It views the machine’s lower divertor, upper divertor, inner wall and outer wall in infrared and visible light.

Experiments with the infrared camera have produced results including surface temperatures measurements, surface heat flux profiles and heat distribution along the wall, both in latitude and longitude.

The research team’s findings were published in the American Institute of Physics Review of Scientific Instruments.