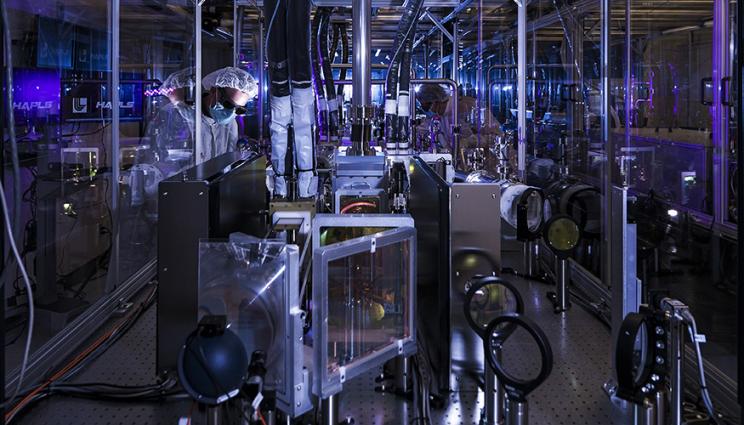 L3-HAPLS -- the world’s most advanced and highest average power, diode-pumped petawatt laser system -- was designed, developed and constructed in only three years by Lawrence Livermore National Laboratory’s NIF and Photon Science Directorate and delivered to ELI Beamlines in June 2017. Photo by Jason Laurea/LLNL

Since the end of September, an integrated team of scientific and technical staff from LLNL and ELI Beamlines has worked intensively on the installation of the laser hardware. All laser support systems, such as vacuum and cooling, were connected to the building, signaling readiness to turn the laser back on in its new home.

L3-HAPLS consists of a main petawatt beamline, energized by diode-pumped "pump" lasers. The system was constructed, assembled and ramped to an intermediary performance milestone that demonstrated its capability and marked the milestone for shipping and integrating with the facility. Staff from ELI was extensively trained on the laser’s assembly and operation while at Livermore to ensure success in transferring the HAPLS technology to the ELI user facility.

In early 2018, the L3-HAPLS system's high energy pump laser will be gradually brought up to previous performance, followed by ramping the petawatt beamline first in energy and then in average power. 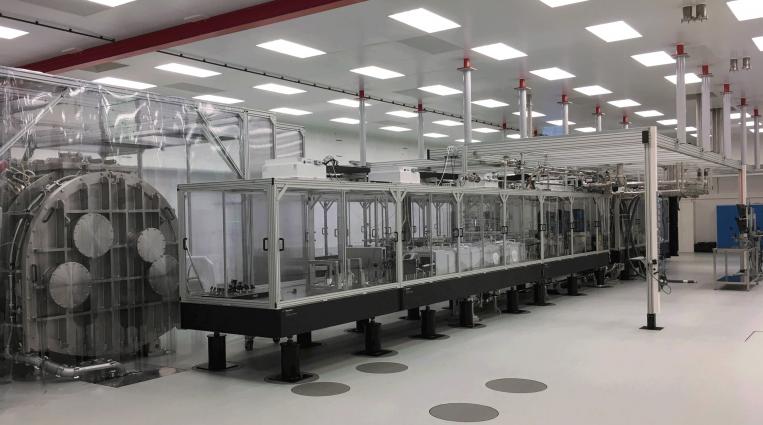 "Over the course of more than four decades, LLNL has built an international reputation for developing some of the world’s more powerful and complex lasers," LLNL Director Bill Goldstein said. "The successful delivery and installation of L3-HAPLS represents a new generation of high-energy, high-peak-power laser power systems. This collaboration, and others like it, provide LLNL with the opportunity to carry on its tradition of redefining the boundaries of science and technology."

LLNL’s decades of cutting-edge laser research and development led to the key advancements that distinguish L3-HAPLS from other petawatt lasers: the ability to reach petawatt power levels while maintaining an unprecedented pulse rate; development of the world’s highest peak power diode arrays, driven by a Livermore-developed pulsed power system; a pump laser generating up to 200 joules at a 10 Hz repetition rate; a gas-cooled short-pulse titanium-doped sapphire amplifier; a sophisticated control system with a high level of automation including auto-alignment capability, fast laser startup, performance tracking and machine safety; a dual chirped-pulse-amplification high-contrast short-pulse front end; and a gigashot laser pump source for pumping the short-pulse preamplifiers.

Despite its complexity, L3-HAPLS was designed for a user facility. The focus is on the application or experiment, and the laser must run reliably, robustly and with minimal user intervention at record performance. This ability already has been demonstrated during the test runs at LLNL.

"L3-HAPLS is a quantum jump in technology. Not only did it allow LLNL to test and advance new laser concepts important for our mission as a national lab, it also is the first high peak power laser that can deliver petawatt pulses at average power – more than 1 megajoule/hour – entering the industrial application space," said Constantin Haefner, LLNL’s program director for Advanced Photon Technologies (APT) in NIF&PS. "Innovations driven by L3-HAPLS, such as the semiconductor laser diode pumps or mid-scale Green DPSSL technology, already have reached the market -- an important reminder that investment in laser technology spurs advancement in areas well beyond science."

When commissioning at ELI Beamlines is complete next year, L3-HAPLS will have a wide range of uses, supporting both basic and applied research. By focusing petawatt peak power pulses at high intensity on a target, L3-HAPLS will generate secondary sources such as electromagnetic radiation or accelerate charged particles, enabling unparalleled access to a variety of research areas, including time-resolved proton and X-ray radiography, laboratory astrophysics and other basic science and medical applications for cancer treatments, in addition to industrial applications such as nondestructive evaluation of materials and laser fusion.