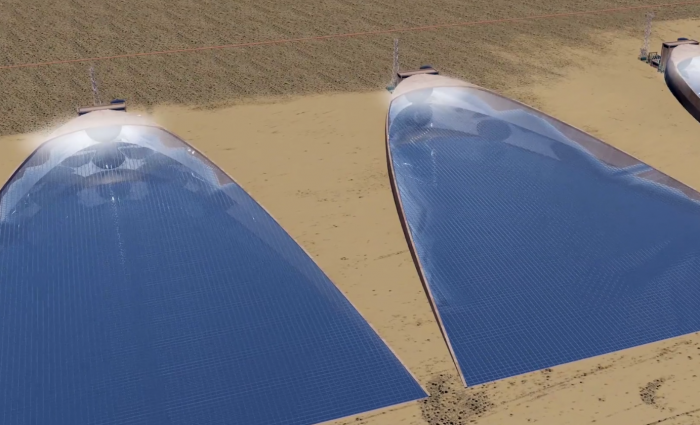 The project is part of DOE’s SunShot Initiative, which is a collaborative national effort that aggressively drives innovation to make solar energy fully cost-competitive with traditional energy sources before the end of the decade. Through SunShot, DOE supports efforts by private companies, universities, and national laboratories to drive down the cost of solar electricity to 6 cents per kilowatt-hour.

The Concentrating Solar Power: Concentrating Optics for Lower Levelized Energy Costs (CSP: COLLECTS) funding program aims to further accelerate progress toward the SunShot goals through research and development to produce dramatic improvements and cost reductions in concentrating solar power (CSP) collectors, also known as reflectors. Projects target the design and manufacture of novel solar collectors, which use reflective surfaces to concentrate sunlight on a small area where it is absorbed and ultimately converted into electricity.

"This is an excellent example of a partnership between industry and the national laboratories to use cutting-edge additive manufacturing techniques to advance innovative energy technology," said Jeff Roberts, LLNL’s deputy director for Energy and Climate Security.

Solar energy collection technology represents one of the biggest opportunities to reduce the cost of solar energy because traditional mechanical solar collectors, like heliostats, require large amounts of steel, concrete and land. However, digital glass has the potential to replace today’s sun tracker stations with thin transparent panels using a fraction of today’s materials, while also drastically reducing the area needed for solar power plants by a factor of five to 10 for the same annual energy harvest.

An observer looking at a Microfluidic Light Steering (MLS) collector would initially see nothing more than a solid transparent slab. However, once an external signal is applied, the transparent block of material’s internal mirrors will dynamically form to redirect sunlight. This steering of light is substantially independent of wavelength, polarization, system size and power level. The capability is ultimately based on micron-scale capillaries containing a refractive Index Matching Fluid (IMF) distributed within a transparent solid. The physical distribution of the fluid within the capillaries allows light to be steered to a solar receiver, where it can be captured and turned into energy.

"At Giant Leap Technologies we believe that the next major advance in solar energy lies in liberating nature’s secrets for the electronic control of sunlight. It will provide amazing and previously unimagined ways to deploy low-cost solar power installations and has the potential to set new directions for both the solar thermal and photovoltaic industries for decades to come," said GLT’s CEO Leo DiDomenico.