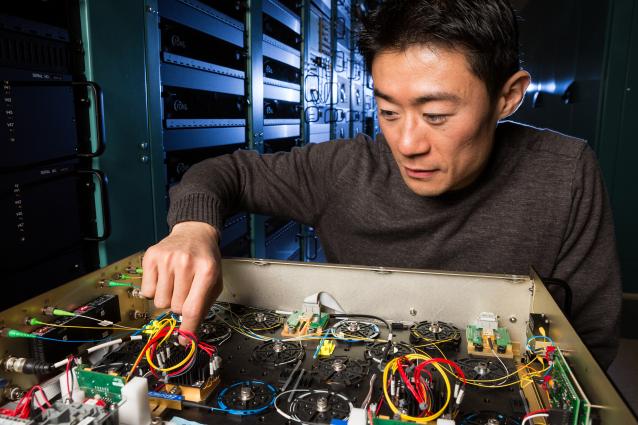 LLNL optics engineer Jason Chou looks over a new technology called Laser SHIELD that won an R&D 100 award. In the past, it took as long as 12 hours to manually screen 48 critical checkpoints at LLNL's National Ignition Facility -- the largest laser in the world -- for harmful laser pulses. With the Laser SHIELD advance, the screening can be done in less than one second and at the push of a button.

LIVERMORE, Calif.--Lawrence Livermore National Laboratory researchers are the recipients of five awards among the top 100 industrial innovations worldwide in 2012.

The five technologies honored by the trade journal R&D Magazine were developed by three teams of LLNL scientists and engineers, a team of Lab physicists and two LLNL computational scientists who worked with two other national labs, a British lab and a company.

The winning of an R&D 100 award provides a mark of excellence known to industry, government and academia and represents one of the most innovative ideas of the year.

This year's R&D 100 awards will be presented Nov. 7 during a black-tie dinner at the Renaissance Orlando at SeaWorld in Orlando, Fla.

With this year's results, the Laboratory has captured a total of 148 R&D awards since 1978. U.S. Department of Energy national laboratories received a total 36 awards in this year's judging.

"My sincere congratulations to the winners of this year's R&D 100 Awards," said U.S. Department of Energy Secretary Ernest Moniz. "The scientists and engineers who developed these award-winning technologies at the cutting edge facilities across our national labs are keeping Americans at the forefront of the innovation community and assuring our nation's economic competitiveness and national security."

LLNL Deputy Director for Science and Technology Bill Goldstein noted,  "I am very pleased that the Laboratory has received this recognition through the R&D 100 awards this year. The Laboratory has again succeeded in winning acclaim in a broad range of research areas that benefit the nation and U.S. industry."

A team of LLNL scientists and engineers has developed a safe and versatile material, known as DNA Tagged Reagents for Aerosol Experiments (DNATrax), that can be used to reliably and rapidly diagnose airflow patterns and problems in both indoor and outdoor venues.

Until DNATrax particles were developed, no rapid or safe way existed to validate air transport models with realistic particles in the range of 1-10 microns.

Successful DNATrax testing was conducted at the Pentagon in November 2012 in conjunction with the Pentagon Force Protection Agency. This study enhanced the team's understanding of indoor ventilation environments created by heating, ventilation and air conditioning (HVAC) systems.

DNATrax are particles comprised of sugar and synthetic DNA that serve as a bar code for the particle. The potential for creating unique bar-coded particles is virtually unlimited, thus allowing for simultaneous and repeated releases, which dramatically reduces the costs associated with conducting tests for contaminants.

Using this revolutionary imaging technique, a range of fundamental and technologically important material and biological processes can be captured in action, in complete billionth-of-a-meter detail, for the first time.

The primary application of MM-DTEM is the direct observation of fast processes, including microstructural changes, phase transformations and chemical reactions, that shape real-world performance of nanostructured materials and potentially biological entities. The instrument could prove especially valuable in the direct observation of macromolecular interactions, such as protein-protein binding and host-pathogen interactions.

While an earlier version of the technology, Single Shot-DTEM, could capture a single snapshot of a rapid process, MM-DTEM captures a multiframe movie that reveals complex sequences of events in detail. It is the only existing technology that can capture multiple electron microscopy images in the span of a single microsecond.

IDES Inc. has licensed the technology from LLNL and worked with the Laboratory to define the instrument as a commercially available product. The firm expects to have its first orders within the next several months.

Two Livermore computer scientists served on a Sandia National Laboratories-led team that developed Mantevo Suite 1.0, the first integrated suite of small software programs, also called "miniapps," to be made available to the high performance computing (HPC) community. These miniapps facilitate the development of new HPC systems and the applications that run on them.

Miniapps (miniature applications) serve as stripped down surrogates for complex, full-scale applications that can require a great deal of time and effort to port to a new HPC system because they often consist of hundreds of thousands of lines of code. The miniapps are a prototype that contains some or all of the essentials of the real application but with many fewer lines of code, making the miniapp more versatile for experimentation. This allows researchers to more rapidly explore options and optimize system design, greatly improving the chances the full-scale application will perform successfully.

These miniapps have become essential tools for exploring complex design spaces because they can reliably predict the performance of full applications. Consequently, HPC system developers can make earlier and better informed design decisions. Such a tool, or set of tools, is of particular importance as computer scientists develop next-generation supercomputers and their applications in a ferociously competitive global market.

Computing hardware has historically enabled rapid information processing by "sequential" execution. But clock speeds have stalled and developers are looking to new approaches. Future performance gains will come almost exclusively from running sets of instructions concurrently - not sequentially - necessitating basic design changes to computer components and how these interact. Collaborative, simultaneous development of all system components, called "co-design," is seen as the only way to dramatically advance computer performance.

The cover to the R&D 100 application shows two photos that together serve as a metaphor for the miniapp. The first photo shows three men sitting on boards holding ropes and weights illustrating the basic engineering concept for a bridge design; and the second photo shows the Forth Bridge in Scotland, which was built using that design.

Besides Sandia National Laboratories and LLNL, other members of the Mantevo project include: Los Alamos National Laboratory; the University of Bristol (UK); the Atomic Weapons Establishment (AWE); and the University of Warwick. The team pioneered the "miniapp" concept and Mantevo 1.0 is the first integrated collection of full-featured miniapps. DOE/NNSA labs have had a longstanding interest in miniapps as a way to accelerate the development of high performance scientific computing. Computing industry leaders such as Intel, IBM, NVIDIA, AMD and Cray also use miniapps as essential tools for the design of new systems.

In the past, it took as long as 12 hours to manually screen 48 critical checkpoints at the National Ignition Facility (NIF) for harmful laser pulses. The screening equipment had to be moved from point to point throughout a facility the size of three football fields.

Now with a new technology, called Laser SHIELD (Screening at High-throughput to Identify Energetic Laser Distortion), the screening can be done in less than one second, with the push of a button.

Proper screening of pulses is critical for the operation of high-energy lasers to ensure that the laser does not exceed safe operating conditions for optics. The energetic beams of light are so powerful that, when left uncontrolled, they can shatter the extremely valuable glass inside the laser. If a harmful pulse is found, immediate adjustments can be made in order to protect the optics for the facility.

Laser SHIELD is a custom-designed high-throughput screening system built from low-cost and commercially available components found in the telecommunications industry. Its all-fiber design makes it amenable to the unique needs of high-energy laser facilities, including routing to intricate pick-off locations, immunity to electromagnetic interference and low-loss transport (up to several kilometers).

The technology offers several important benefits for NIF. First, the facility is able to fire more shots in less time-an efficiency that saves the facility millions of dollars each year. Second, high-energy lasers are more flexible to wavelength changes requested by target physicists. Third, by identifying harmful pulses before they damage the laser's optics, the facility potentially saves hundreds of thousands of dollars in maintenance costs each year.

An LLNL team of six physicists has developed a new technology that is a stepping stone to enable some of the limitations on high-power fiber lasers to be overcome.

Their technology, dubbed "Efficient Mode-Converters for High-Power Fiber Amplifiers," allows the power of fiber lasers to be increased while maintaining high beam quality.

Currently, high beam quality fiber lasers are used in machining, on factory floors and in a number of defense applications and can produce kilowatts of power.

The conventional fiber laser design features a circular core and has fundamental limitations that make it impractical to allow higher laser power unless the core area is increased.

LLNL researchers have pioneered a ribbon design to increase the laser's core area along the axis of the ribbon fiber. Their design makes it difficult to use a conventional laser beam, so the LLNL team converted the beam into a profile that propagates into the ribbon fiber and is converted back once it is amplified.

The use of this LLNL technology will permit the construction of higher power lasers for lower costs and increase the power of high quality fiber lasers from kilowatts of power to potentially about 100 kilowatts.