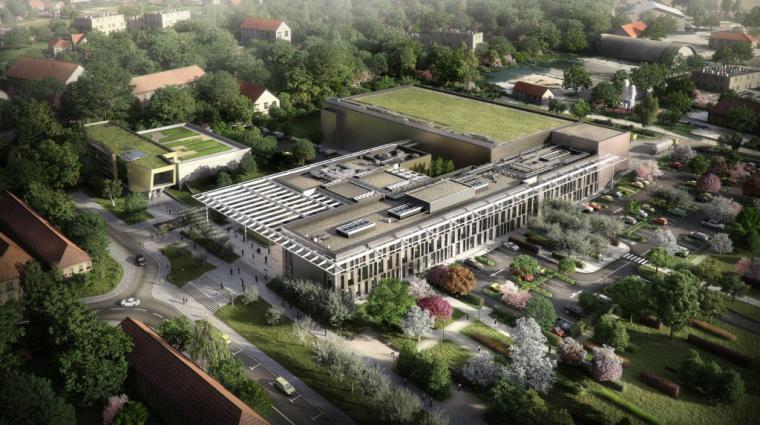 The High Repetition-Rate Advanced Petawatt Laser System, or HAPLS, is being designed, developed, assembled and tested at Lawrence Livermore. It will be transferred to the ELI Beamlines facility in 2016, where it will be commissioned for use by the international scientific community.

Breanna Bishop, bishop33 [at] llnl.gov, 925-423-9802
LIVERMORE, Calif. --Lawrence Livermore National Laboratory (LLNL) has awarded a major subcontract to FEMTOLASERS Produktions GmbH (based in Vienna, Austria) as part of the construction of a revolutionary high-power laser system for the European ELI-Beamlines science facility in the Czech Republic.

In order to achieve this, the HAPLS laser requires a state-of-the-art laser "front-end" source to generate the ultrafast pulse at high stability with ultra-low noise and robust operation.

Following an international competitive tender, FEMTOLASERS was selected by LLNL and the ELI-Beamlines team as fully meeting the technical requirements and able to meet the strict timescales required for construction of the ELI-Beamlines facility.

The ELI-Beamlines facility represents an investment of nearly 7 billion Czech crowns (about $350 million) on behalf of the European Union and Czech Republic government. It forms part of the pan-European ELI project, and is being designed to significantly advance the state-of-the-art for high power lasers, allowing international scientific research in areas as diverse as medical imaging, particle acceleration, biophysics, chemistry and quantum physics.

"ELI will become the first international laser research facility, much like a 'CERN for laser research,' hosting some of the world's most powerful lasers enabling a new era of unique research opportunities for users from all countries," said Professor Wolfgang Sandner, director general of the ELI-Delivery Consortium International Association (AIBSL). "ELI is proud to find support for these ambitious goals from outstanding partners in international research and industry, such as LLNL and FEMTOLASERS GmbH."

The FEMTOLASERS system combines technologies from across Europe and around the world to meet the exacting specifications of the ELI-Beamlines facility. It relies on a scheme referred to as "double-chirped pulse amplification," enabling high signal to noise in the output pulses which will seed HAPLS.

The front-end consists of an ultrashort pulse seed oscillator (INTEGRAL (TM) element (TM) PRO 500), a first stage multipass amplifier (FEMTOPOWER (TM) compact (TM) PRO), a temporal pulse cleaning stage based on cross-wave polarization, a stretcher and pulse width controller system from LLNL, a spectral amplitude and phase shaper and a booster amplification stage (FEMTOPOWER (TM) V). This system is due to be delivered to LLNL by August to provide critical performance data in support of the HAPLS laser system under construction by LLNL.

"We are very pleased to work with this company, which is supplying one of the most critical components for HAPLS. It will be integrated into our system from an early date, providing essential data for optimization of our next-generation laser," said Constantin Haefner, project manager for HAPLS at LLNL.

"FEMTOLASERS is honored to have been awarded by LLNL and the ELI-Beamlines team a significant contribution to the HAPLS project. We are an experienced and global manufacturer driving innovation in the ultrafast laser community and acting as technology hub by integrating the most advanced subsystems and components from technology leaders in France, USA, Hungary, Germany, to name a few countries only," said Andreas Stingl, president and CEO of FEMTOLASERS. "We are looking forward to delivering a unique ultrafast amplifier system to ELI, one of the most prestigious high power laser projects to date, and collaborating closely with LLNL, one of the most distinguished laser labs worldwide."

Experiments with unprecedented high fidelity will be enabled by the high repetition rate of HAPLS, made possible by diode-pumped solid state laser technology developed at LLNL. When complete, HAPLS will be the world's highest average power petawatt laser system.