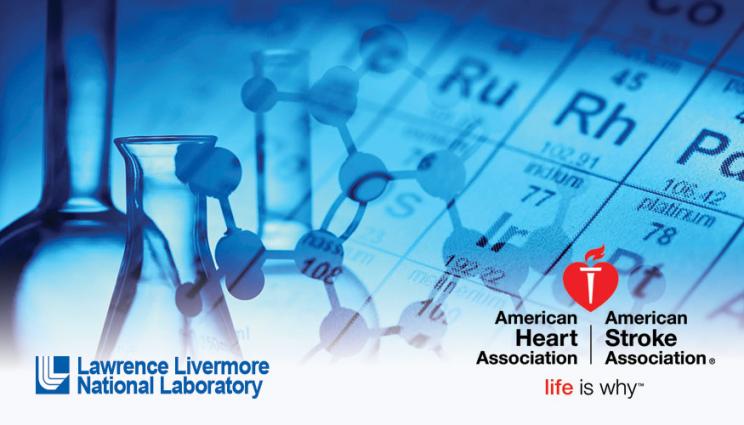 The two organizations will leverage the world’s most powerful supercomputers to accelerate drug discovery. LLNL scientists and engineers in collaboration with AHA-funded scientists will create a simulated environment that rapidly and precisely predicts how drugs bind to their target proteins and will test these predictions in experimental systems to generate a robust drug pipeline of new and targeted therapies.

This collaboration is part of the AHA's newly formed Center for Accelerated Drug Discovery, reinforcing the AHA’s commitment to to improve people’s health by accelerating the pace at which drug-protein interactions are identified and documented before actual clinical trials begin.

It takes an average of 10 years for a new medicine to be commercialized in the marketplace and an average cost of $2.6 billion. As the population continues to age, the need for medications to treat chronic conditions, such as heart disease, Alzheimer’s disease and diabetes, will continue to increase, challenging the current system to remove barriers to affordable health care and preventive medicine.

LLNL has applied its expertise in computational chemistry to model biological molecules since the early 1990s, and has developed and applied laboratory-based methods to study drug effectiveness and side effects in humans and animals since the 1960s. More recently, LLNL has used computational biology to predict human outcomes for drug safety and efficacy.

In this new partnership, AHA and LLNL aim to develop a unique combination of computational and experimental tools that will allow the biomedical community to validate targeted drug hypotheses that have higher probabilities of success and reduce time to market by potentially 50 percent.

To achieve this goal, LLNS and AHA will collaboratively develop and validate new high-performance computing (HPC) tools to quantitatively predict binding as a guide to on- and off-target molecular interactions.

"Some form of cardiovascular disease affects more than one in every three adult Americans," said Nancy Brown, CEO of the American Heart Association. "As part of the American Heart Association's Center for Accelerated Drug Discovery, we are committed to taking the guesswork out of drug effectiveness by collaborating with Lawrence Livermore National Laboratory to help patients alleviate not only heart disease, but also suffering for all people everywhere managing other chronic conditions."

"The computing infrastructure at LLNL will enable machine learning and ultimately get safe drugs to the marketplace quicker," said Felice Lightstone, LLNL’s principal investigator on the project. "By bringing world-class, leading-edge engineering and high-impact biological fields together, we can develop a comprehensive reference atlas of cell-protein targets to accelerate and hone drug discovery."

The research and development work under the Cooperative Research and Development Agreement (CRADA) intends to integrate machine learning (ML) approaches to the discovery pipeline to address a critical gap in the ability to predict drug safety and efficacy.

Heart disease is the No. 1 killer worldwide. Stroke ranks second globally and is a leading cause of severe disability. An estimated 17.7 million people die from cardiovascular disease annually, representing 31 percent of all global deaths and of these deaths, an estimated 7.4 million were due to coronary heart disease and 6.7 million were due to stroke.  AHA is working toward improving the cardiovascular health of all Americans by 20 percent and reducing deaths from cardiovascular diseases and stroke by 20 percent, all by the year 2020. Precision medicine could ultimately reduce the overall cost to the system by developing targeted and affordable medicines for patients.

About the American Heart Association

The American Heart Association is devoted to saving people from heart disease and stroke -- the two leading causes of death in the world. The association fights for stronger public health policies and provides lifesaving tools. The Dallas-based association is the nation’s oldest and largest voluntary organization dedicated to fighting heart disease and stroke. To learn more or to get involved, call 1-800-AHA-USA1, visit the web or call any of the offices around the country.  Follow on Facebook and Twitter.