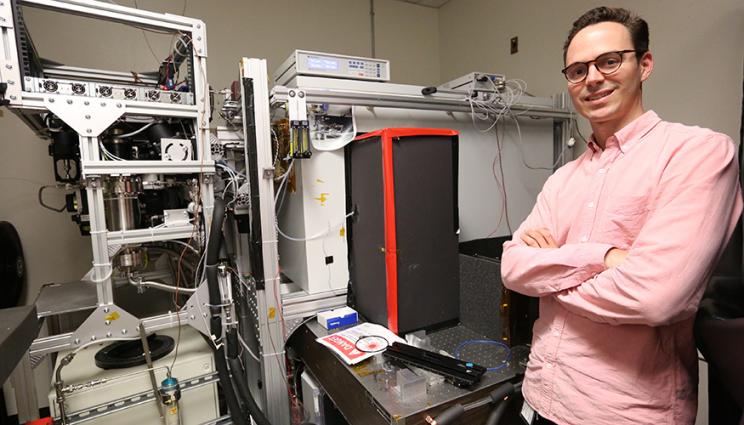 In biological systems, carbon-14 (14C ) can be used as a biochemical tracer to track micro-doses of nutrients, toxins and therapeutics in humans and animals. For example, the 14C can be tacked on to a vitamin. When a human ingests the vitamin, researchers can track how much of the vitamin metabolizes and how much is excreted through urine analysis.

For tracer studies in biochemical systems, 14C concentrations must be accurately measured at and above the natural abundance. In the past, this was typically done with accelerator mass spectrometry (AMS). AMS opened new regimes of experimentation such as human phase drug trials using subtherapeutic doses. However, AMS’ complexity and cost have limited this measurement method and other derivative techniques. Because of AMS’ limitations, Livermore researchers developed a new device for biological tracer studies.

Cavity ring-down spectroscopy (CRDS) has emerged as a laser-based method capable of 14C measurements. Livermore scientists developed a CRDS spectrometer capable of measuring carbon-14 for biological studies. "We have developed a 14C spectrometer that balances complexity and sensitivity for biological 14C measurements," said Daniel McCartt, leader of the project. "It uses robust, mature hardware, suitable for a turnkey operation." 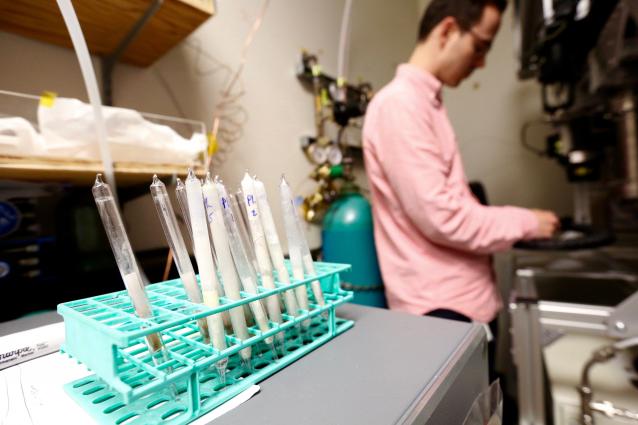 The Lab’s Center for Mass Spectrometry (CAMS) partnered with Picarro Inc. The new laser-based system supplements the ion-source accelerator with a more accessible, tabletop device, which was patented last week.

Biological samples must be homogenized, dried and then combusted to carbon dioxide for both AMS and CRDS. For traditional AMS, the carbon dioxide is then reduced to graphite. This requires approximately 12 hours. The CRDS system measures the 14C content of the combusted carbon dioxide, and a sample can be prepared in minutes.

For a pharmacokinetic case study, scientists used guinea pigs as the model organism and the carbon-14 content of samples was measured with CRDS and compared to AMS results. Guinea pigs were dosed with 100 mg of an oxime aceteyltransferase reactivator, and tissue and plasma samples were taken in a geometric time series. The guinea-pig CRDS case study accurately reproduced the AMS results using relatively simple hardware, and zero day-to-day adjustments to the CRDS optical system.