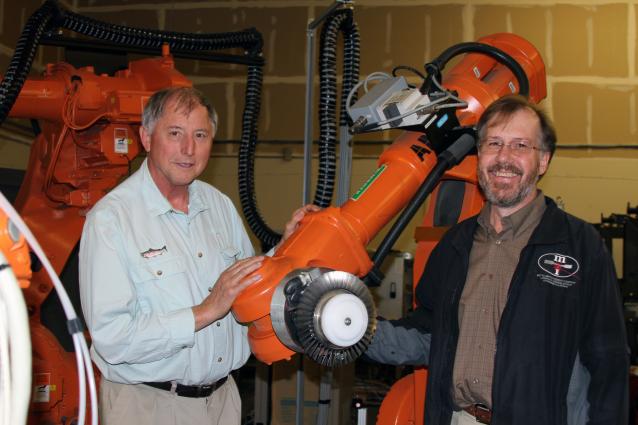 Former Lawrence Livermore National Laboratory researchers Lloyd Hackel (left) and Brent Dane successfully commercialized a laser peening technology at LLNL and used it to become entrepreneurs at their current company, the Metal Improvement Company (MIC). Both men are standing in front of a robot used to peen parts for aviation and other industries at MIC's Livermore R&D center. Photo by Julie Russell/LLNL

Editor's note: This article is part of an occasional series about LLNL entrepreneurs.

Most people don't realize it, but the airplane they are flying on may be stronger and safer thanks to a pair of former Lawrence Livermore National Laboratory researchers who developed and commercialized an innovative but relatively obscure technology.

Lloyd Hackel and Brent Dane found a way to improve laser peening and commercialize it, enabling the aviation industry to manufacture wings and engines blades that are more fuel efficient and fatigue resistant. This technology has saved the industry hundreds of millions of dollars and improved passenger safety.

Realizing they had a disruptive technology, the pair, like other LLNL researchers before them, decided to leave the Laboratory a decade ago and embark on a career as entrepreneurs.

They took a leap of faith with their technology and ended up working for the Metal Improvement Company (MIC), a subsidiary of the Curtiss-Wright Corporation, a global product manufacturer and service provider to multiple industries.

Ten years later, their decision to join industry has had a profound impact on industrial manufacturing in aviation and other industries as well as taken their technology to new heights.

"Laser peening is a great technology with a bright future that's affecting people's daily lives," said Dane, MIC's director of laser technology. "Chances are that next time people fly on an airplane, it will be made from parts strengthened by laser peening."

Laser peening usesa unique high-energy laser developed at LLNL that's fired at the surface of a metal part to generate pressure pulses of one million pounds per square inch, which propagate through the part to plastically compress the metal and thereby generate an area of residual compressive stress. In doing so, peening makes the part resistant to cracking and longer lasting.

In aviation, laser peening is used to treat engine blades and wings of aircraft from corporate to jumbo jets.In the energy sector, it's used to strengthen turbine blades used in gas and nuclear reactors.

Hackel and Dane, who have nearly 40 years of LLNL experience combined, began their path for developing commercial laser peening technology while working on a project funded by the Department of Defense's Defense Advanced Research Projects Agency (DARPA), the Navy and Air Force.

"That laser was ideal for peening," Hackel said.

The pair's research eventually attracted the attention of MIC. Company executives wondered if Hackel and Dane could use their expertise to develop a disruptive laser peening technology for manufacturing purposes.

Neither men invented laser peening. It's been around since the 1970s. However, the laser designs used in that process were slow, expensive and difficult to maintain; thus commercial applications were far and few.

Hackel and Dane set out to improve the technology by deploying their laser, a neodymium-doped glass laser that produces one billion watts of peak power in 20-billionth of a second pulses. That's about the same output as a large commercial power plant.

"Industry came to the Lab and said 'What do you know about laser peening?'," Hackel said. "And the answer was nothing specific at the time, but we knew a lot about lasers and shock physics. That's what laser peening is and we knew how to put the two together."

In late 1997, LLNL's Industrial Partnerships Office (IPO) worked with the researchers and MIC to develop a Cooperative Research and Development Agreement (CRADA) to commercialize the technology.

"This was an example of transferring a technology into the industrial world that could make a big difference," Hackel said. "IPO was extremely helpful. They paved the way for us by making sure all the intellectual property and legal issues for tech transfer were taken care of."

By 2003, both researchers decided it was time to leave the Lab for MIC. Both saw industry as an opportunity to push their technology further and impact people on an industrial scale.

"The education and experience I gained at the Lab was enormously and fundamentally invaluable. It's a great place." Hackel said. "However, industry provided an opportunity for getting the most advanced products built. We get to be in the middle of all that."

The pair quickly learned that the private sector and the Laboratory are very different. One is about developing technology and the other is about making it profitable.

"You quickly learn that the bottom-line is very important -- profit, loss and the price of labor," Dane said. "I enjoy every aspect of my job."

Working out of an MIC regional R&D center in Livermore, the entrepreneurs have expanded their laser peening technology. It has enabled MIC to win large contracts to peen more than 40,000 jet engine fan blades and 1,000 discs using a highly-skilled workforce to operate robots.

These blades and discs power hundreds of commercial aircraft, including Boeing 787s, Boeing 777s, Airbus 340s as well as Gulfstream and Bombardier regional jets. The company is also using laser peening to form the aerodynamic curvature of Boeing 747-8s to make the aircraft the world's most fuel efficient per passenger mile.

Jet engine blades normally require regular replacement because of metal fatigue associated with wear and tear. But the first blades peened by MIC are still working after 12 years of commercial service. The company's laser peening work is estimated to have saved the aviation industry hundreds of millions of dollars in parts and service.

That puts a big smile on the faces of the entrepreneurs.

Since no other company in the world has the same laser peening technology as MIC, the future looks bright. Plus, there are many growth areas including using laser peening to stop metal erosion and corrosion on ship propellers, rudders and thrusters.

"These failure mechanisms create enormous costs to industry and the military," Hackel said. "We have done initial demonstrations to show that laser peening can make an impact in this area."

The former LLNL researchers said their entrepreneurial success would not have been possible without the Lab.

"I really enjoyed my years at the Lab. We did amazing things," Dane said. "Laser peening would not have happened without our fundamental research at the Lab."