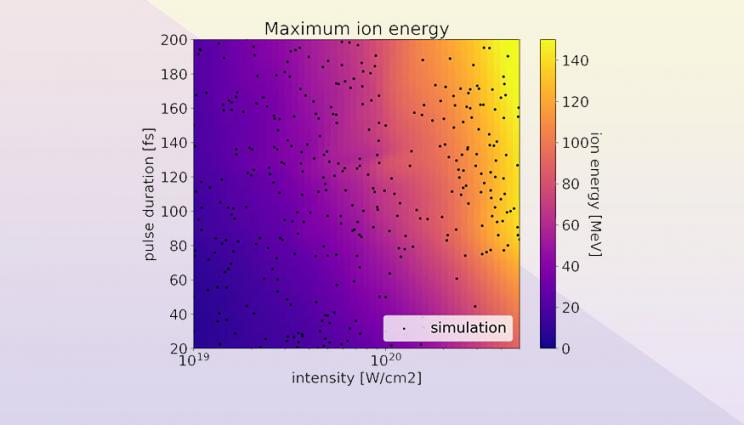 This image shows a parameter scan of maximum ion energy as a function of laser pulse duration and intensity generated by a neural network surrogate model. Overlaid are datapoints from the simulation ensemble to train the neural network.

While advances in machine learning over the past decade have made significant impacts in applications such as image classification, natural language processing and pattern recognition, scientific endeavors have only just begun to leverage this technology. This is most notable in processing large quantities of data from experiments.

Research conducted at Lawrence Livermore National Laboratory (LLNL) is the first to apply neural networks to the study of high-intensity short-pulse laser-plasma acceleration, specifically for ion acceleration from solid targets. While in most instances of neural networks they are used primarily for studying datasets, in this work the team uses them to explore sparsely sampled parameter space as a surrogate for a full simulation or experiment.

The research is featured in Physics of Plasma and is highlighted as an Editor’s Pick. LLNL postdoctoral appointee Blagoje Djordjević is lead author and co-authors include Andreas Kemp, Joohwan Kim, Scott Wilks, Tammy Ma and Derek Mariscal, as well as Raspberry Simpson from the Massachusetts Institute of Technology. The work was funded under a Laboratory Directed Research & Development (LDRD) project and a Department of Energy grant.

“The work primarily serves as a simple demonstration of how we can use machine learning techniques such as neural networks to augment the tools we already have,” Djordjević said. “Computationally expensive simulations such as particle-in-cell codes will remain a necessary aspect of our work, but with even a simple network we are able to train a surrogate model that can reliably fill out interesting swaths of phase space.”

Djordjević generated an ensemble of more than 1,000 particle-in-cell simulations using the EPOCH code. This dataset encompassed a wide range of experimental parameters of interest that covered several orders of magnitude. This dataset, from which he extracted physical parameters of interest such as the ion energy, Ei and electron temperature, Te, was then used to train a multilayer, fully connected neural network.

The trained neural network acted as a surrogate model to explore the parameter space of interest, in particular for feature discovery. It was demonstrated how the neural network could be used to rapidly explore this space, mapping the dependency of ion energy on laser intensity and pulse duration τ over several orders of magnitude.

The surrogate also was used to discover an interesting behavior in the dependency on preplasma gradient length scale Lg and this quantity was further explored using more elaborate techniques such as ensemble surrogates and transfer learning. The accelerated ion energy depends nonlinearly on the profile of the underdense preplasma the laser interacts with before it hits the main target. While one could expect to find a resonance value near the relativistic plasma skin depth, it was notable that the network was able to reliably generate this result despite the sparsity of data. Lastly, as a proof of concept, it was shown how the surrogate could be used to extract important physical information from experimental data that is difficult to observe directly, such as the gradient length scale.

“Using a sparse but broad dataset of simulations, we were able to train a neural network to reliably reproduce the trained results as well as generate results for unsampled regions of parameter space with reasonable confidence, Djordjević said. “This resulted in a surrogate model, which we used to rapidly explore regions of interest.”

Derek Mariscal, who serves as Djordjević’s mentor, said the work outlines a completely new approach to the way the physics of short-pulse high-intensity laser interactions are studied. Machine learning approaches are now being widely adopted in the sciences and this is a foundationally important step forward in developing high-speed, high-accuracy high-energy density science.

Mariscal said most short-pulse laser experiments over the past 20 years have assumed that the delivered laser pulses were essentially Gaussian in shape, but this is largely an unvalidated assumption.

“The LDRD project is aimed at delivering tailored sources from shaped high-intensity laser short-pulses while paying close attention to the as-delivered laser pulses,” he said. “We have found through modeling and a limited set of experiments that these pulse details can have a profound impact on the resulting electron and ion sources.”

Fundamentally, high energy (keV-to-MeV) electrons are pushed by the laser interacting with target, and these electrons can be used to accelerate protons, heavy ions or produce bright X-ray sources. Since there is a nearly infinite set of possible laser pulse shapes, there is an extremely broad parameter space to examine through either experiments or simulations.

“The technique of performing simulation parameter scans is not novel; however, the power of machine learning is in interpolating between the sparsely spaced points,” Mariscal said. “This is a massive savings in computation power because simulations of this nature can be very expensive.”

Djordjević said the research verifies the approach of using machine learning to explore physics of interest by leveraging relatively low-cost simulation ensembles to cover as much ground as possible.

Immediate application of the work will benefit two LLNL projects, an LDRD project led by Mariscal, where large ensembles will be used to model the dependency of ion acceleration on shaped laser pulses, and a project led by LLNL physicists Tammy Ma and Timo Bremer where these ensembles will be used to train neural networks for virtual diagnostics and operations control.

Laser-plasma acceleration already has an important application for the inertial confinement fusion mission as the National Ignition Facility (NIF) uses relatively short, picosecond-long laser pulses to accelerate hot electrons, which in turn generate X-rays for imaging the capsule implosion at the center of NIF.

“In our immediate future we will be generating a new set of simulations to support two experiments our team will be fielding this summer on high-repetition-rate laser systems,” Djordjević said. “The most important aspect of this project is that we will be shaping short, femtosecond-scale laser pulses, where NIF's lasers are shaped on the nanosecond scale. This will require us to run even more simulations where we not only vary standard parameters such as target foil thickness and laser intensity and duration, but also spectral phase contributions to the laser profile.”