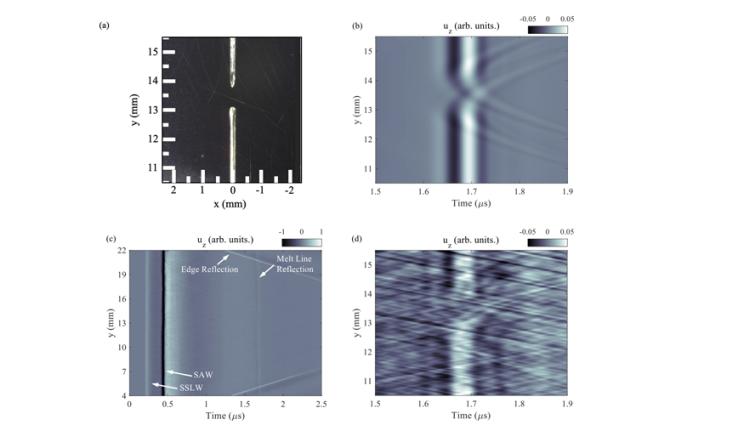 Surface acoustic waves have historically been used to characterize surface and near-surface features such as cracks, pits and welds in engineering materials, and are used in geology — at a much larger length scale — for detecting subterranean features such as caves. Due to their surface and near-surface sensitivity, SAWs are well-suited for characterizing melt lines in LPBF printing, according to researchers.

To test this potential, the LLNL team carried out experiments by producing laser melted lines using a fiber laser directed into a vacuum chamber and produced samples of titanium alloy for analysis with 100-watt, 150-watt and 350-watt powered lasers. Next, they developed a method for producing and detecting surface acoustic waves, using a pulsed laser to generate ultrasound and measured the displacement with a photorefractive Iaser interferometer.

The results from laser-based ultrasound (LBU) experiments were validated with optical microscopy, for the surface features, and X-ray computed tomography for the sub-surface features. Researchers reported that in comparison with X-ray CT, the LBU system is “better posed to perform real-time inspection and can acquire and process data at a faster rate.”

“Utilizing the laser-based ultrasound significantly shortened the time for subsurface void detection compared to conventional X-ray CT from days to minutes,” said LLNL engineer and lead author Kathryn Harke. “While more development would need to be done before implementation of this diagnostic for in-process monitoring, our team is excited by these initial findings.”

Lab researchers said while the method is well-suited for in situ implementation in LPBF printing, there are limits on the size and depth of detectable voids, and in situ monitoring or post-build inspection would require further development.

“A system like this may find use for rapidly qualifying new LPBF machines and in-service machines after changes to metal powder feedstock or modifications to the melt laser power or scan speed,” Stobbe said.

The work was funded by the Laboratory Directed Research and Development (LDRD) program.