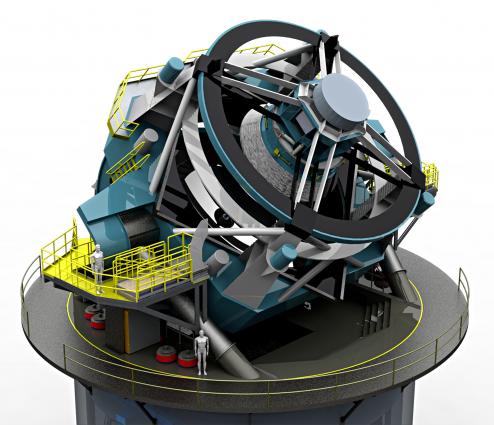 A 2010 rendering of the LSST, a proposed 8.4-meter ground-based telescope that will survey the entire visible sky deeply in multiple colors every week from a mountaintop in Chile. Photo courtesy of LSST Corp./NOAO

LIVERMORE, Calif. — The Large Synoptic Survey Telescope (LSST), in which Lawrence Livermore plays a large role, has been ranked by a key scientific committee as the top priority for the next large ground-based astronomical facility.

In a recent report, New Worlds, New Horizons in Astronomy and Astrophysics , a committee convened by the National Research Council for the National Academy of Sciences, recommends that LSST be submitted immediately for NSF’s Major Research Equipment and Facilities Construction (MREFC) consideration with a view to achieving first light before the end of the decade.

Upon completion, the telescope will be equipped with the world’s largest digital camera, which will be used to survey the entire visible sky. These images can then be used to study the light-bending gravity of dark matter in an effort to chart the history of the expansion of the universe and probe the mysterious nature of dark energy.

Because the project has made considerable progress in terms of its readiness since 2001, the committee judged that LSST was the most "ready-to-go."

Livermore has played a pivotal role in the LSST project over the last decade, including: development of the overall optical design, leadership in the development of the operations simulator (which calculates how the telescope can be optimally scheduled for multiple scientific programs), design of the wavefront sensing and guide sensor systems (which measure the aberrations in the telescope optics and the errors in pointing, so that these can be corrected by the telescope active optics and guiding systems) and design of the camera optics and filters (drawing on expertise from the National Ignition Facility’s large optics development).

Livermore researchers have led work to understand how well LSST will be able to estimate cosmological parameters using observations of supernovae.

Scheduled to begin full operations six years after the construction begins, the 8.4-meter LSST telescope will be equipped with the world’s largest digital camera (3.2 billion pixels). This system will survey the entire visible sky to very faint limits in multiple colors every week.

The project will last for 10 years and will produce 2,000 images of every part of the sky – more than 20,000 square degrees. It will be constructed on Cerro Pachón, a mountain in northern Chile. LSST will produce 30 terabytes of data per night, yielding a total database of 100 petabytes. This massive data set will be used to construct, for the first time, a color "movie" of the sky that will enable unique and powerful studies of objects that move or change in brightness.

Examples range from potentially hazardous near-Earth asteroids to exploding massive stars (supernovae) in the distant universe. The total 10-year data set will also use the light-bending gravity of dark matter to chart the history of the expansion of the universe and probe the mysterious nature of dark energy.

The LSST data will be open to the public and scientists around the world – anyone with a Web browser will be able to access the images and other data produced by the LSST.

Thirty four universities and national labs have joined together in a public private partnership to build LSST. The National Science Foundation and the Department of Energy Office of Science have contributed funds for design and development of the LSST.