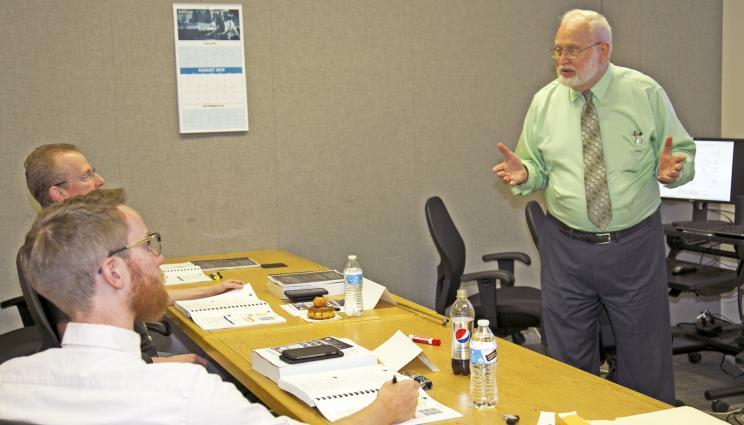 About 25 Lab employees recently learned the ins and outs of space science by taking a course on Space Mission Analysis and Design, taught at LLNL by James Wertz, an astronautics professor at the University of Southern California. Interacting with Wertz in the foreground are Jordan Karburn and Aaron Peer in the background.

Lab's space program is on the rise

The national security community now refers to space as a “warfighting domain.” As such, it is both integral to the U.S. defense posture and vulnerable to growing foreign capabilities. Remaining competitive in this contested domain is considered by many to be a national security imperative.

In parallel, NASA and the nation’s broader space-faring ecosystem are advancing plans for long-endurance human spaceflight, more systematic exploration (or even eventual colonization) of Mars, investigating prospective opportunities for on-orbit manufacturing and assessing the potential for commercial asteroid mining.

The Lab’s SSSP is active on all fronts and seeks to help advance emerging national priorities.

“We are unusual in our demonstrated ability to support both discovery science and applied national security space missions,” said Program Leader Mike Pivovaroff.

There are advantages in being able to effectively leverage Lab competencies in areas such as X-ray astronomy, modeling and simulation, material science or system design.

For example, LLNL’s extensive suite of test-validated codes are relevant to satellite design and performance, while its computation and artificial intelligence expertise can support the military’s space situational awareness requirements and the civilian sector’s space traffic-management needs.

The Lab’s ability to contribute fully is predicated on its ability to recruit and retain a talented multidisciplinary staff. Over the past decade, the number of SSSP-affiliates has grown more than tenfold and SSSP continues to hire scientists and engineers.

While some of the program’s professional staff come with a strong space science background, built satellites in private industry, operated satellites or exploited relevant data for defense or intelligence agencies, others are new to the space domain. For these, the program provides specialized professional development opportunities.

For example, SSSP recently partnered with James Wertz, an astronautics professor at the University of Southern California and president of Microcosm Inc., to offer a course in Space Mission Analysis and Design (SMAD). About 25 Lab employees took advantage of this opportunity to learn the “ins and outs” of space missions.

“We think this course is one of the best ways to give our space program employees the core knowledge they need for our mission,” said Jeff Klingmann, SSSP’s engineering lead within Global Security. “It is perfect for Lab employees with solid engineering or physics backgrounds and a passion for space work.”

Both of the employees who were interviewed found the weeklong SMAD course, which was given Aug. 19-23, to be beneficial.

“I’ve really enjoyed it,” said Cynthia Panas, a five-year LLNL employee who is a mechanical engineer. “I have an ME background, but I’ve only done Earth-bound research. The class is giving me some of the background knowledge that I don’t have. This will allow me to apply my ME skills to a new domain.”

Her colleague, Timm Wulff, a 20-year Lab employee and electrical engineer, said the class is “like a semester-long course crammed into a week.” It provides a broad overview of “everything revolving around satellites, launches, orbits, maintenance and communications, payload design and optimizing weight and electrical power.”

Wertz noted that a principal aim of the course is to help employees understand what it takes to successfully accomplish space missions, which may be risky, expensive and time-intensive.

Currently, the U.S. government spends in the neighborhood of $60 billion per year on space and launches about 20 missions per year. It is interested in partnering with “new space” companies to substantially reduce the traditional cost and time required to meet mission need.

“While it previously took more than 10 years to go from concept to launch for missions meant to last on orbit for 15 years,” Wertz said, some space missions today are built with 1-year-old technology and meant to stay in orbit for only two to five years. Looking ahead, Lab scientists and engineers have an opportunity to translate this vision into reality in Pivovaroff’s view.