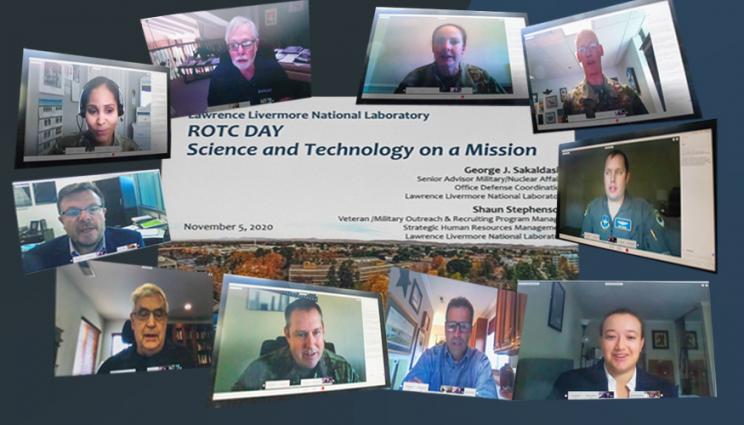 However, due to the current COVID-19 pandemic, the event was held virtually, giving the college students from 55 universities, representing ROTC programs in the U.S. Air Force, Army and Navy, the opportunity to learn about the breadth of programmatic work performed at LLNL. It also introduced them to the Lab’s ROTC summer internship program, in hopes that many of the cadets will someday return either as interns or Laboratory employees after their military career is over.

Besides talks from Lab employees and military personnel from around the nation, this year’s event featured virtual tours of the National Ignition Facility, the High Explosives Application Facility, High Performance Computing and the Advanced Manufacturing Laboratory.

“You represent a significant change in the country’s response to its adversaries,” said LLNL Director Emeritus George Miller in greeting the virtual audience. “For 30 years, the U.S. was unchallenged in the world. Now we’re in a situation where the U.S. is not facing one but two adversaries, Russia and China, with nuclear capabilities. It’s up to you and your generation to deal with these complicated situations because the state of the technology and the breadth of ways these countries can threaten and give us great difficulty.”

Second Lt. Samantha Bleykham, who works in Los Angeles as an Air Force engineer, interned at the Lab earlier this year through the Newly Commissioned Officer Program.

“I had an absolute blast; I really enjoyed my time at the Lab,” Bleykham said. “It’s a great place to work or intern. Great history, too. It’s so in tune with up and coming technology and provides ample opportunity to learn and grow to any who seeks it.”

While LLNL is limited to hosting about 40 cadets for its ROTC summer internships, ROTC Day provides an important venue for giving early exposure to the Lab’s wide range of project areas to dozens of future military officers.

The goal is to provide information about the National Nuclear Security Administration, the Department of Energy and LLNL; the Laboratory's mission supporting defense and national security; and the ROTC internship opportunities at the Lab.