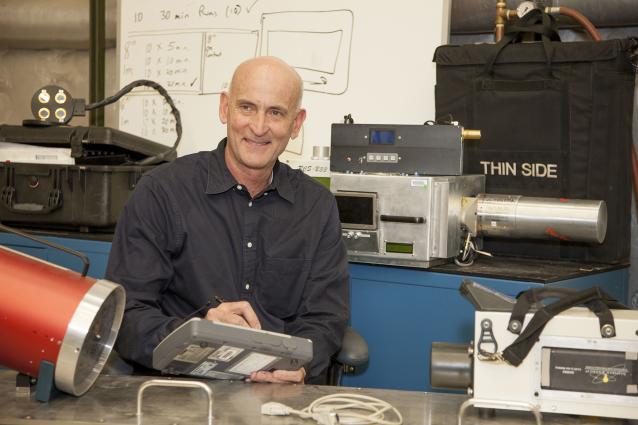 Mark Rowland has been named a senior member of the Institute of Electrical and Electronics Engineers (IEEE). Photo by Jacqueline McBride/LLNL

Mark Rowland, a physicist in Global Security's "N" Program, has been named a senior member of the Institute of Electrical and Electronics Engineers (IEEE). Fewer than 8 percent of IEEE members attain this level.

Rowland, who joined the Laboratory in 1984, has worked in the field of radiation detection for much of his 28-year career.

In March, 2011, within several days of when the tsunami-crippled Fukushima nuclear plant started leaking radiation, four Detective instruments were shipped to Japan. The instruments were moved around the island nation and used to calibrate the aerial measurement systems for about two months.

The Detective's mechanically-cooled design was highly practical in comparison with liquid nitrogen-cooled systems because of the disaster conditions that prevailed in Japan at that time and because of supply and transportation problems.

As the number of Detective instruments has reached beyond the hundreds, the instrument has become recognized as the gold standard in real-time performance.

Rowland also has led or worked on the development of a number of other instruments, including a gamma-ray camera, a large neutron scintillator multiplicity array, a handheld low-resolution sodium iodide nuclear material identification system and an X-ray fluorescent analyzer. In addition, he led a team that designed and built two robots that were delivered to the Chernobyl nuclear plant for fuel characterization.

The holder of 12 patents, Rowland has served as an adviser and policy expert to the International Atomic Energy Agency since 1990.