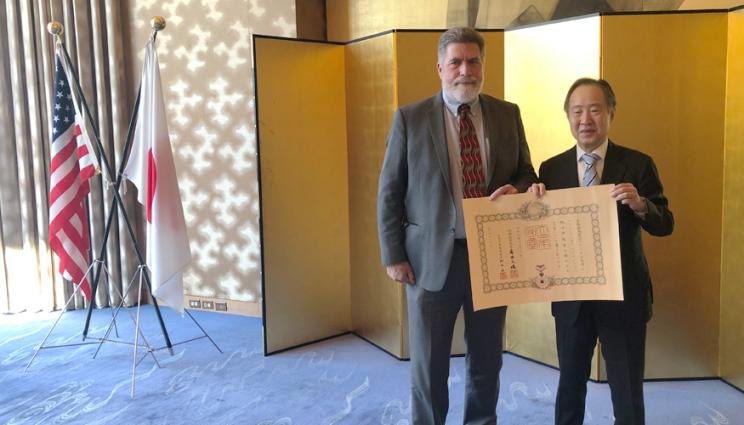 Brad Roberts, the director of LLNL’s Center for Global Security Research, has been given the Order of the Rising Sun in Washington, D.C. in a small ceremony at the residence of the Japanese ambassador to the United States, Koji Tomita.

Brad Roberts has received one of the highest honors bestowed by the Government of Japan.

The director of the Center for Global Security Research (CGSR) at Lawrence Livermore National Laboratory (LLNL), Roberts has been given the Order of the Rising Sun, an honor awarded by the prime minister of Japan to people who have rendered distinguished service to the nation. The honor is rarely awarded to citizens of countries other than Japan.

Roberts received the award last month in Washington, D.C., in a small ceremony at the residence of the Japanese ambassador to the United States, Koji Tomita. The award was presented for his contributions to the U.S.-Japan alliance, particularly for his role in strengthening bilateral cooperation on extended nuclear deterrence and in mentoring the emerging generation of officials and scholars.

“It is an honor to join a distinguished group of prior recipients. It also is an honor and pleasure to work with the people of Japan to meet the new challenges of a changing security environment,” said Roberts after the ceremony.

He added that “the ceremony had a certain personal quality to it because the ambassador was my partner in co-founding the Extended Deterrence Dialogue in 2010. He spoke about the value of our collaboration to the Government of Japan, to the people of Japan and to him personally and about our progress over more than a decade in deepening the cooperation.”

LLNL Director Kim Budil noted that, “Brad is exceptionally deserving of this important recognition of his leadership in working with the Japanese to strengthen deterrence. He has done immense work building relationships and sharing his expertise with a wide range of allies and partners and is a trusted adviser around the world. Under his leadership, CGSR has expanded its engagements significantly with U.S. allies in Europe and Asia, bringing a very important perspective to the Lab as we continue to evolve to advance our missions in the 21st century.”

Roberts recalls that when he arrived in the Pentagon in 2009 as the newly appointed deputy assistant secretary of defense for nuclear and missile defense policy in the Obama Administration, the governments of Japan and the U.S. had no prior or on-going dialogue of any kind about nuclear deterrence.

“It was essentially a taboo subject,” he said. “But then we broke some new ground. During the 2009 Nuclear Posture Review, we discovered a mutual interest and benefit in frequent consultations, in reaction to the growing nuclear threats to Japan. When the review concluded, we had a new foundation in place for sustained, substantive and high-level bilateral dialogue on nuclear deterrence. This was formalized as the EDD, short for Extended Deterrence Dialogue—which continues to this day.”

Under the EDD, government officials from the two nations meet regularly to analyze new developments in the security environment, to deepen shared understanding of emerging challenges to deterrence and to agree and implement measures to adapt extended deterrence and strengthen it for new challenges.

Roberts added, “after I left government service in 2013, I spent two months in Tokyo at the think-tank of Japan’s Ministry of Defense, the National Institute for Defense Studies. My mandate was to help reorient that community onto emerging challenges to extended deterrence and strategic stability in Northeast Asia. I was particularly impressed with the focus of the younger generation of scholars on emerging challenges. Many of them have gone on to have a major impact on policy development.”

During last month’s ceremony, Ambassador Tomita also congratulated Roberts on the publication of a Japanese translation of his 2015 book, “The Case for U.S. Nuclear Weapons in the 21st Century.” Released in August, the Japanese edition has already gone into its second printing. “This is both a sad reflection on the eroding security environment and a clear indicator of rising Japanese interest in nuclear deterrence,” Roberts said.

Roberts joined Livermore in 2015, following 16 months as the William J. Perry Fellow at Stanford University’s Center for International Security and Cooperation, where he wrote his book on the case for U.S. nuclear weapons.

Earlier in his career, prior to 2009, Roberts served for 14 years as a member of the research staff at the Alexandria, Virginia-based Institute for Defense Analyses and as an adjunct professor at George Washington University.

“At CGSR, we have made it a priority to bring the perspectives of our allies in both Asia and Europe into all of our discussions,” he said. “We’ve also put much more focus on extended deterrence than most other study centers. Our allies live in the nuclear cross-hairs of their nuclear-armed neighbors. The extended deterrence the United States provides in both Asia and Europe is critical to their security. If we fail to do this job well, the repercussions will be wide-ranging and dangerous.”

CGSR was established at LLNL in 1996 to serve as a bridge between the science, technology and national security policy communities. It focuses on emerging national security challenges in the areas of deterrence, assurance and strategic stability.