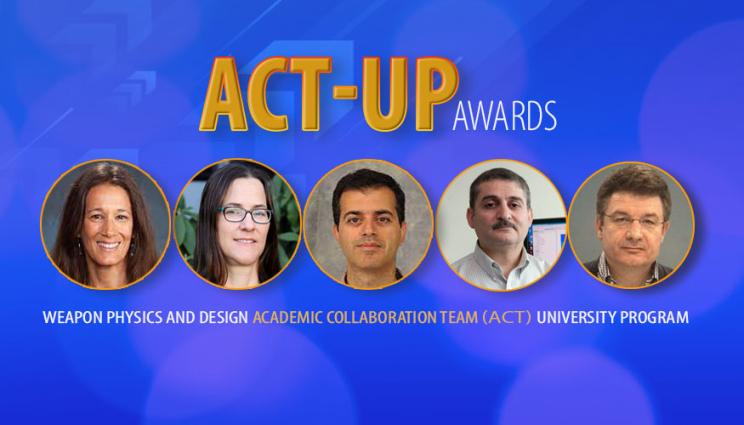 Now in its third year, the ACT-UP awards were created to encourage and advance strategic partnerships among universities with a focus on the Lab’s mission. The awards emphasize key outcomes, including innovation and basic science to establish long-term relations on target topics with target universities; and products comprising of data, methods and technology where the Lab taps into university relations to respond with agility to WPD Program challenges.

The ACT-UP awards also serve as a pipeline to promote education, recruiting and hiring that builds on the Lab’s university relationships for a workforce with cultivated skills, knowledge and abilities.

“The ACT-UP awards help advance the Lab’s Weapon Physics and Design missions by engaging university researchers,” said Rose McCallen, chair of ACT-UP. “We have had tremendous success in attracting some of the best researchers from various universities to collaborate with the Lab.”

This year, five awards were distributed to five universities for a total of $500,000 per year for three years. This year’s recipients, project title and LLNL and university principal investigators are as follows:

In 2020, four universities received the ACT-UP Award, totaling nearly $400,000 per year for three years. The recipients, project title, LLNL and university investigators and students are as follows:

University of California, Los Angeles
Investigation of controlling the nonlinear optics of plasmas through advances in laser and plasma capabilities