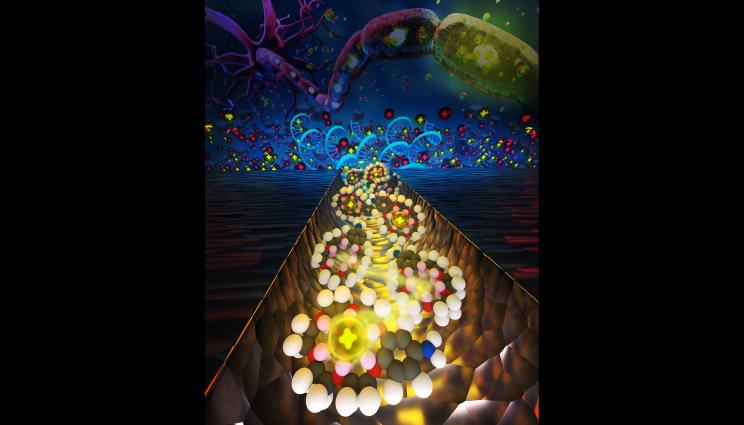 A solid-state nanopore decorated with crown ether and DNA is selective to potassium ions over sodium ions. Image by Ryan Chen/LLNL

Since the discovery of biological ion channels and their role in physiology, scientists have attempted to create man-made structures that mimic their biological counterparts.

New research by Lawrence Livermore National Laboratory (LLNL) scientists and collaborators at the University of California, Irvine shows that synthetic solid-state nanopores can have finely tuned transport behaviors much like the biological channels that allow a neuron to fire.

In biological ion channels, two of the most exciting properties are the ability to respond to external stimuli and differentiate between two ions of the same charge, such as sodium and potassium.

It is well known that synthetic nanopores can distinguish between positive and negative ions (such as potassium and chloride) but in the new research, the team was able to distinguish between sodium and potassium ions despite their equal charge and nearly identical size. The potassium-selective channels showed currents that were roughly 80 times larger for potassium ions than sodium ions, significantly higher than any other man-made system has demonstrated and a first for solid-state nanopores.

"We can use our synthetic platforms to better understand how biological systems work," said Steven Buchsbaum, LLNL staff scientist and a lead author of a paper appearing in the Feb. 8 edition of Science Advances. "Performing studies on man-made systems built from the ground up can give unique insight into how these pores function and the underlying physical phenomena behind them."

UCI professor and collaborator Zuzanna Siwy said the most exciting application for the nanopores is their use as a building block toward making artificial biomimetic systems such as an artificial neuron.

Biology uses ion selectivity to enable energy storage in the form of a chemical potential across a cell membrane. This energy can then be tapped into later, powering processes such as nerve signaling. "The ability to do the same in man-made materials takes us one step closer to making synthetic biomimetic componentry," Siwy said.

The capability to distinguish between ions that closely resemble each other also can be applied to areas such as desalination/filtration and biosensing.

"Working with synthetic nanopores offers the benefits of increased control over the pore design and using materials that are much more robust than those seen in biology," said Francesco Fornasiero, LLNL staff scientist and coauthor. "This could enable us to eventually replace or repair biological materials with artificial versions that are superior to their biological counterparts."