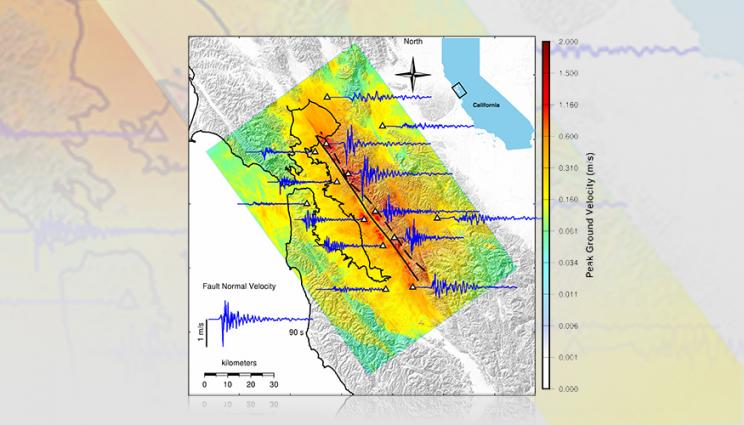 A Lawrence Livermore National Laboratory (LLNL) team has published new supercomputer simulations of a magnitude 7.0 earthquake on the Hayward Fault. This work represents the highest-ever resolution ground motion simulations from such an event on this scale.

The study used the SW4 code developed at LLNL. Simulations resolved rapidly varying shaking with broader band frequencies up to 10 Hz, doubling resolution of previous runs. Seismic waves as short as 50 meters were resolved across a regional-scale domain covering the San Francisco Bay Area from Napa to San Jose and the Sacramento-San Joaquin Delta to the Pacific Ocean. Previous simulations lacked the performance and memory to model such high frequency motions on such a large domain. The results appear in the Aug. 11 edition of the Bulletin of the Seismological Society of America.

High-frequency shaking is critical for evaluating seismic hazards and the risk of damage to the built environment, such as buildings, homes, transportation and utility lifelines.

These supercomputer simulations allow scientists to estimate the time varying three-dimensional pattern of shaking (the seismograms) for an earthquake of interest.

The calculations were made on the IBM Sierra supercomputer featuring NVIDIA graphics-processing units (GPUs) at LLNL during the Open Science period in fall 2018. Three years of investment from the Lab’s Institutional Center of Excellence (iCOE) prepared SW4 for the GPU computers, Sierra and Lassen.

“The iCOE prepared computer codes at LLNL to run efficiently on Sierra and Lassen prior to their arrival so they could immediately take advantage of those capabilities when they came online, and this earthquake simulation and other science-based projects are achieving exactly what they were meant to do,” said Chris Clouse, Advanced Simulation and Computing executive.

Additional analysis was done to account for the effects of soft soils that cover the urbanized areas of Bay Area.

“Even with the world’s most powerful computers we are not able to represent high-frequency, short wavelength waves in realistic soft soils in the shallowest 10-50 meters directly beneath us,” said LLNL seismologist Arthur Rodgers, lead author of the study. “Furthermore, soft soils deform nonlinearly when subjected to strong shaking. We used a recently developed empirical model to correct ground motions for the effects of soft soils not included in the Sierra calculations. These improved the realism of the simulated shaking intensities and bring the results in closer agreement with expected values.”

The research was funded by LLNL’s Laboratory Directed Research and Development program and benefited from the Lab’s Institutional Computing Grand Challenge program.

Bulletin of the Seismological Society of America