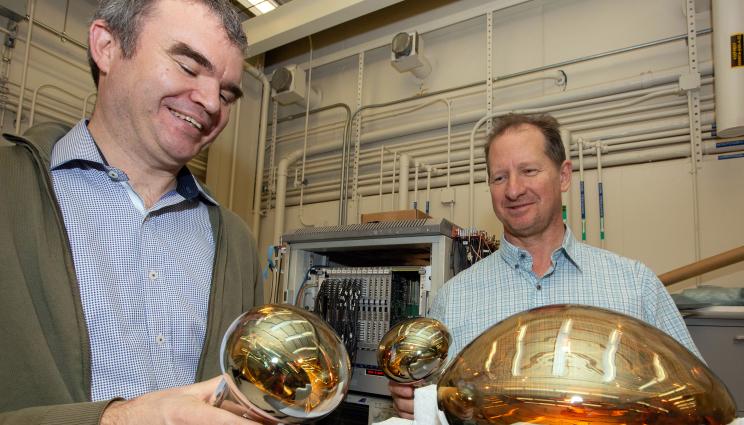 A tiny, invisible particle could offer help for a big problem — the threat of nuclear proliferation.

For more than six decades, scientists have been developing instruments for fundamental physics that can detect antineutrinos, particles that have no electric charge, almost no mass and easily pass through matter. Antineutrinos are emitted in vast quantities by nuclear reactors, and since the 1970s, scientists have considered turning antineutrino detection into a tool for nuclear security.

With advances by scientists at Lawrence Livermore National Laboratory (LLNL) and other institutions, researchers are moving closer to the day when they can deploy technology to remotely monitor these subatomic particles from nuclear power plants at long distances.

Such a breakthrough would allow them to warn international authorities about the illicit production of plutonium, a key material for nuclear weapons. It also could help with verification of existing and planned treaties that seek to limit nuclear weapons materials production worldwide.

Reviews of Modern Physics has published an article that describes the potential uses and limitations of antineutrino detectors for nuclear security applications related to reactor, spent fuel and explosion monitoring.

The article is co-authored by two LLNL physicists — Adam Bernstein and Nathaniel Bowden — along with four university colleagues: Bethany Goldblum of the University of California, Berkeley, Patrick Huber of Virginia Tech, Igor Jovanovic of the University of Michigan and John Mattingly of North Carolina State University.

The study was initiated as part of an ongoing research effort led by LLNL and supported by the National Nuclear Security Administration’s (NNSA) Office of Defense Nuclear Nonproliferation Research and Development (DNN).

In the paper, the scientists assess the current and projected readiness of various antineutrino-based monitoring technologies.

They contend that advances in applied antineutrino physics have the potential to strengthen the existing Treaty on the Nonproliferation of Nuclear Weapons, which provides a framework for facilitating the peaceful use of nuclear technology while reducing nuclear weapons proliferation risks through safeguards, monitoring and verification.

“The Reviews of Modern Physics (RMP) article is a comprehensive summary of the state-of-the-art in the burgeoning field of applied antineutrino physics,” Bernstein said. “Our work was motivated by important breakthroughs in antineutrino detection technology, and a greater awareness in the last decade of the potential of this unusual tool for reactor monitoring.”

The technology may provide a “way to monitor the plutonium or uranium content of a nuclear reactor in real time that we just don’t have right now,” Goldblum said.

“What’s exciting about the RMP article is that it showcases how antineutrino detection has advanced to the point where we can now consider practical applications of the technology,” Goldblum added.

The researchers concluded that antineutrino technology stationed within about 100 meters of a nuclear reactor could ensure that nations are not making and diverting weapons-usable material under the cover of civilian energy production. By measuring the quantity of antineutrinos produced over a period, it is possible to approximately quantify the amount of plutonium or uranium in a reactor.

“At close range from a reactor, antineutrinos allow the measurement of plutonium content and the production rate,” said Patrick Huber, director of the Center for Neutrino Physics at Virginia Tech. “This capability would provide high-level assurances of treaty compliance while being less intrusive to the facility.”

In the area of far-field monitoring, the researchers also concluded that scientists could one day use the technology for nuclear reactor discovery or exclusion at ranges out to roughly 200 kilometers. “For far-field monitoring, with distances ranging from tens to hundreds of kilometers, key enabling technologies for suitably large detectors are well developed.”

A third application for antineutrino technology to detect diversion of material could be to monitor the spent fuel that has been used to operate nuclear reactors.

Antineutrinos, the antimatter counterpart to neutrinos, are produced in nuclear power plants when the fissile materials of uranium and plutonium break apart, creating fission products that emit antineutrinos in the process.

Several of the article’s authors are involved in efforts to advance antineutrino detection technology.

Researchers from Virginia Tech participate in the Daya Bay experiment, which to date has provided the most precise measurement of antineutrino emission from reactors. They also developed and demonstrated a novel and highly efficient  technology to detect reactor neutrinos without using flammable liquids, called CHANDLER.

LLNL is the lead laboratory for a proposed United States-United Kingdom experiment to demonstrate remote monitoring of nuclear reactors using a kiloton-scale antineutrino detector. A U.S.-U.K. collaboration known as WATCHMAN is working on a candidate design for this detector.

This effort has already “exceeded my expectations,” Bernstein said, adding, “the idea that the nonproliferation community might one day be able to use this technology, that until now has been the exclusive province of fundamental science, is an exciting motivation for this work.”

Jovanovic, of the University of Michigan, is a WATCHMAN collaborator. He also coordinates a synergistic NNSA-sponsored multi-university effort to advance the antineutrino detection technology and its use in nonproliferation under the Michigan-led Consortium for Monitoring, Technology and Verification.

Scientists from LLNL and other institutions also are involved with another antineutrino detection project, the Precision Reactor Oscillation and Spectrum Experiment (PROSPECT), which has operated a novel antineutrino detector at the High Flux Isotope Reactor (HFIR) at DOE’s Oak Ridge National Laboratory.

This effort is searching for the possible existence of a new form of matter, a sterile neutrino, and seeking to better understand antineutrino production in nuclear reactors. Notably, PROSPECT has demonstrated for the first time high-sensitivity antineutrino detection at the earth’s surface, which opens new possibilities for reactor monitoring deployments.

PROSPECT is a collaboration of more than 60 participants from 10 universities and four national laboratories, including LLNL. Bowden is one of the co-spokespeople for the experiment, which is primarily supported by the DOE Office of Science and the Heising-Simons Foundation.