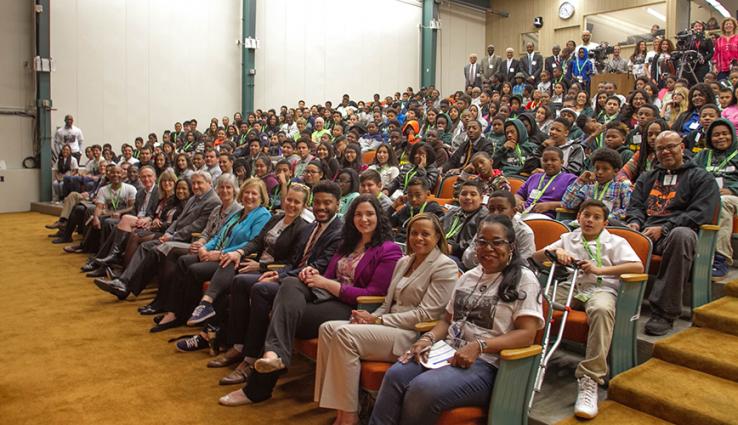 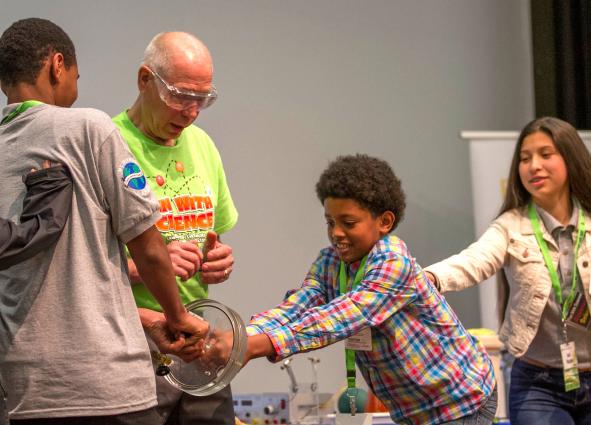 A “Fun with Science” demonstration by Lab scientist Nick Williams enthralled the youth, where they learned basic science principles about air pressure, electricity, chemistry and states of matter. 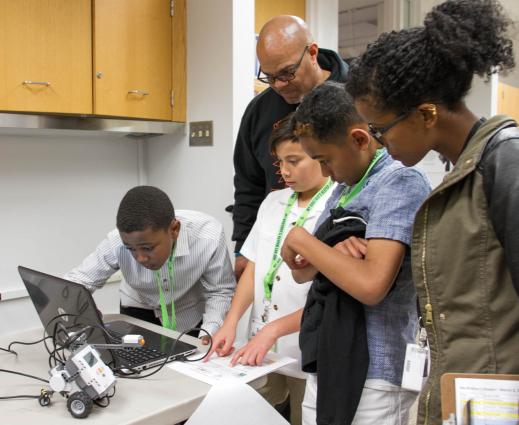 Students attended hands-on workshops and demonstrations, such as learning how to program Lego robots.

Anthony Roy, an eighth-grader at Montera Middle School in Oakland, enjoys math and science, and besides dreaming of becoming a basketball star or lawyer, he wants to create his own smartphone apps.

But his school doesn’t have the resources many other students take for granted, such as a computer or science lab, so Roy is hoping his visit to Lawrence Livermore Lab will inspire him to consider a career path he never thought of before.

"I think it’s really great," Roy said. "When I get back to school, it might help me do better. It’s just very interesting. I’ve had a good experience. I’d love to do it again."

Roy was one of more than 180 underserved and mostly minority boys and girls from school districts in Oakland, San Francisco, Concord, West Contra Costa, Richmond and Tracy who visited the Laboratory on Wednesday as part of the White House’s "My Brother’s Keeper" (MBK) initiative. 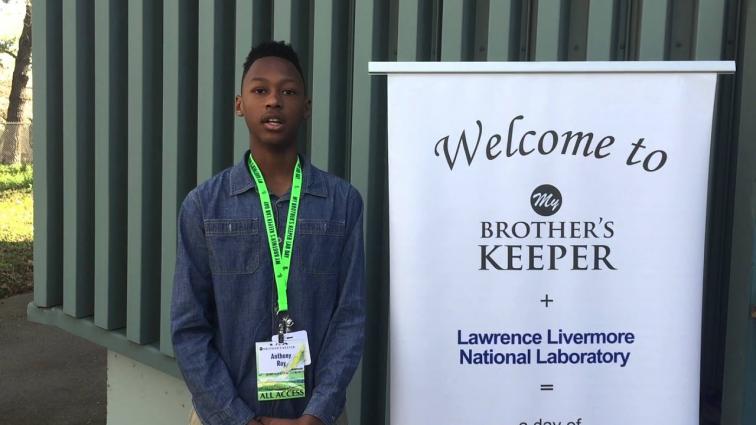 Launched by President Barack Obama in 2014, the program aims to address the opportunity gap faced by boys and men of color, connect young people to mentors and instill a passion for STEM.

Montera teacher Kevin Jennings brought 15 students from his school, along with about 40 others from different Oakland schools through the Manhood Development Program, part of the district's Office of African-American Male Achievement. Jennings said the MBK program helps provide students, especially African-American youth, with a vital access point to science and technology.

"These kids don’t normally have a chance to see something like this," Jennings said. "Tech and science labs, even materials —we have none of that at our school. With everything moving toward technology and being so close to Silicon Valley, we want them to get those jobs when they get older, but if they’re not groomed in science and tech, they’re not going to."

Last summer, the Department of Energy, which joined the MBK alliance and task force, chose the Lab as a site for the first of several MBK events at the national laboratories, drawing more than 60 youth from Oakland, San Francisco and Tracy.

"This is a huge undertaking," Baylis said. "To have this many young people here at one time is very special. We’re going to do our best to make sure you have fun."

After a video introduction from DOE Secretary Ernest Moniz, the youth were wowed by a "Fun With Science" demonstration by Nick Williams, where they learned basic science principles about air pressure, electricity, chemistry and states of matter.

"I see our future," Williams said, looking over the audience. "This is the future. You kids are the ones who will take our places in science and technology." 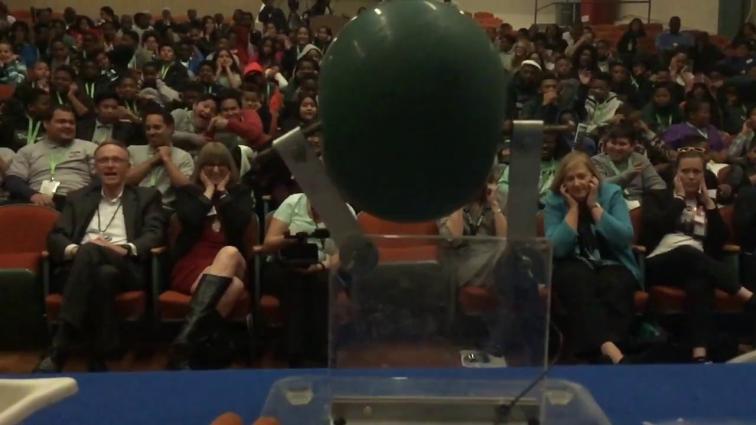 The well-received event was followed by a lunch with Lab scientists and engineers, who answered questions on educational pathways and careers in science, technology, engineering and mathematics (STEM).

Ruby Mendoza, a 17-year old from Ygnacio Valley High School in Concord, said she wants to major in forensic science in college and looked forward to meeting the scientists.

"I’m hoping to get more information on what you do in a laboratory," Mendoza said. "It’s my first time visiting a lab, so it’s really exciting. They’ll be able to tell me what it actually takes to become one of them."

Audrey Goins Brichi, a retired manager of Diversity and Inclusion at Chevron, brought a group of boys and girls from Richmond, the Easter Hill United Methodist Church and Girls Inc. in West Contra Costa County.

"Whether they become scientists, science is a big part of life," she said. "To see scientists at work and realize they are regular people, it can help these kids aspire to a similar career. Hearing or seeing something today and being able to link it back to something they learned in class might help them try harder in school and have a better experience. It’s exposure, little by little." 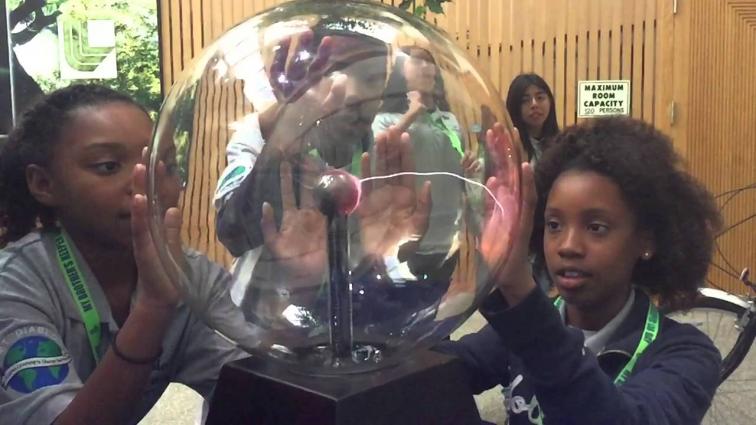 Later in the afternoon, students rotated to hands-on workshops and demonstrations, such as learning how to program Lego robots, taught by members of a computer science class at Millennium High School in Tracy.

"We just want the students to get a feel of STEM programs," said Elijah Williams, a Millennium High junior interested in cybersecurity. "It’s an opportunity to see if it’s something they want to be involved in because a lot of them don’t know about STEM."

Other events hosted by LLNL scientists and engineers included a challenge to build the tallest freestanding tower out of spaghetti and other items, a demonstration of Lab "locators" that use radio frequency and ground-penetrating radar to locate hazards, and an IT-related "Family Feud" game. Along the way, the students also met a scientist-magician, and learned about the National Ignition Facility and lasers via a "laser DJ."

Montera sixth-grader Santana Sanchez-Ortiz, 11, said he was most excited about seeing a demonstration of 3D printing.

"I’m probably never going to be able to see anything like this again," Sanchez-Ortiz said. "I want to see what the scientists do and make, and learn what ideas they have."

"Education is a top priority of the mayor," said Margaret Croushore, speaking for Schaaf’s office. "STEM is a huge part of that, and without programs like (MBK) that allow kids to see the opportunities that exist for them, that’s not possible. In order to make the choices you have to see the choices; this is crucial to showing them what’s out there." 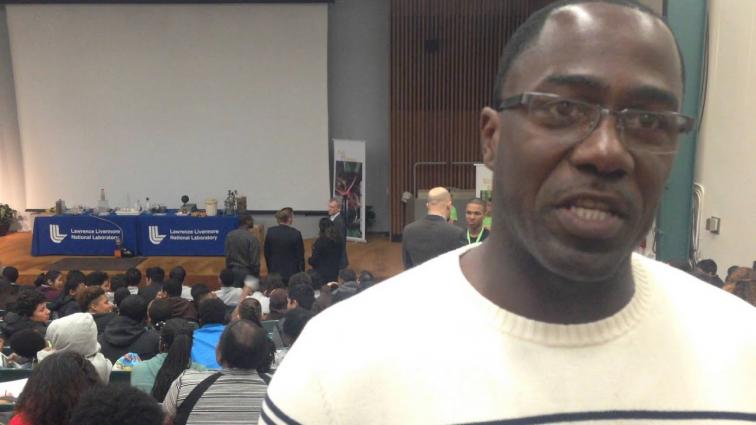 Donald Frederick, a Lab employee in supercomputing, said he wouldn’t have missed his second time volunteering for MBK Day.

"I believe in the idea that we need to encourage as many of our young people to get into STEM careers as possible," Frederick said. "In many fields, we’re going to need replacement people and we need to recruit more underprivileged minorities. They need to get exposed at an early age and see what’s available out there. We’re hoping some of these young people can answer some of those new questions with new solutions."

For Sizwe Abakah, a Manhood Development Program facilitator at Frick Middle School in Oakland, the day was a rousing success.

"They definitely got some experiences to take back with them," Abakah said. "This is a beautiful event. I’m thankful. To expose them to a broader world is pretty cool. It’s something new for them outside of athletics or music; there’s a lot of careers out there."

National MBK Week began Feb. 26 and involves nine of DOE’s national science laboratories, along with eight federal agencies including NASA, the Department of Defense and the National Institutes of Health.

The Laboratory’s Public Affairs Office was engaged on social media throughout the day with the hashtags #MyBrothersKeeperAlliance, #MBKLabWeek and #WeekAtTheLabs.